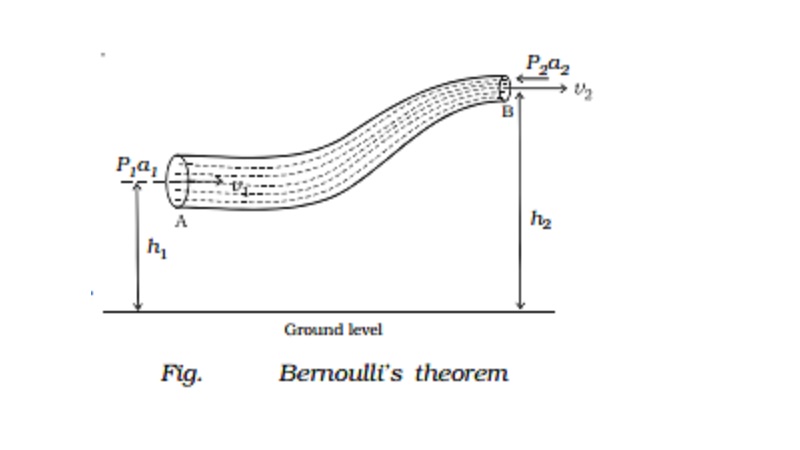 According to Bernoulli's theorem, for the streamline flow of a non-viscous and incompressible liquid, the sum of the pressure energy, kinetic energy and potential energy per unit mass is a constant.

This equation is known as Bernoulli's equation.

Consider streamline flow of a liquid of density ñ through a pipe AB of varying cross section. Let P1 and P2 be the pressures and a1 and a2, the cross sectional areas at A and B respectively. The liquid enters A normally with a velocity v1 and leaves B normally with a velocity v2. The liquid is accelerated against the force of gravity while flowing from A to B, because the height of B is greater than that of A from the ground level. Therefore P1 is greater than P2. This is maintained by an external force.

The force acting on the liquid at A = P1a1

Increase in kinetic energy per second of the liquid

This is Bernoulli's equation. Thus the total energy of unit mass of liquid remains constant.

Each term in this equation has the dimension of length and hence is called head. p/pg is called pressure head, v2/2g is velocity head and h is the gravitational head.

If the liquid flows through a horizontal tube, h1 = h2. Therefore there is no increase in potential energy of the liquid i.e. the gravitational head becomes zero.

This is another form of Bernoulli's equation.