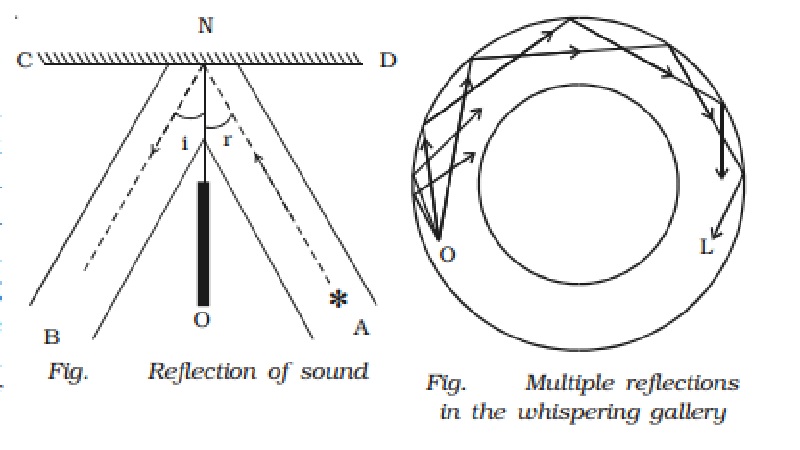 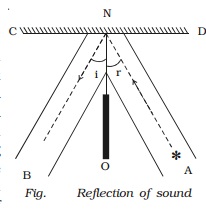 (i)                Whispering gallery : The famous whispering gallery at St. Paul?s Cathedral is a circular shaped chamber whose walls repeatedly reflect sound waves round the gallery, so that a person talking quietly at one end can be heard distinctly at the other end. This is due to multiple reflections of sound waves from the curved walls (Fig.). 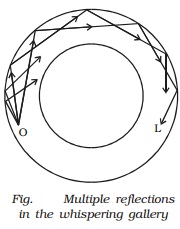 (ii)             Stethoscope : Stethoscope is an instrument used by physicians to listen to the sounds produced by various parts of the body. It consists of a long tube made of rubber or metal. When sound pulses pass through one end of the tube, the pulses get concentrated to the other end due to several reflections on the inner surface of the tube. Using this doctors hear the patients? heart beat as concentrated rays.

(iii)           Echo : Echoes are sound waves reflected from a reflecting surface at a distance from the listener. Due to persistence of hearing, we keep hearing the sound for 1 /10th of a second, even after the sounding source has stopped vibrating. Assuming the velocity of sound as 340 ms?1, if the sound reaches the obstacle and returns after 0.1 second, the total distance covered is 34 m. No echo is heard if the reflecting obstacle is less than 17 m away from the source.