Anatomy of the Liver 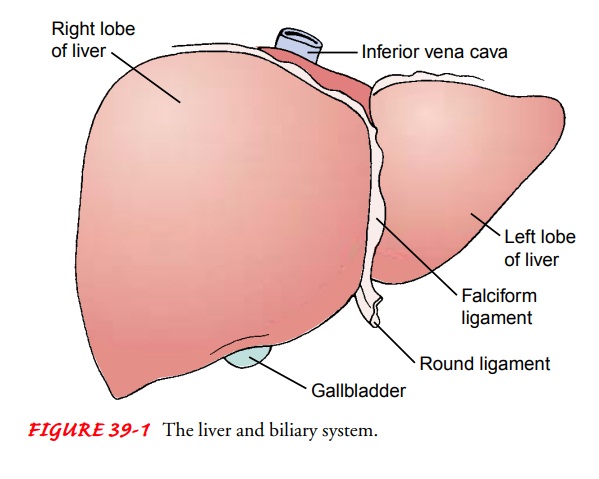 The liver is located behind the ribs in the upper right portion of the abdominal cavity.

ANATOMY OF THE LIVER

The liver is located behind the ribs in the upper right portion of the abdominal cavity. It weighs about 1,500 g and is divided into four lobes. A thin layer of connective tissue surrounds each lobe, extending into the lobe itself and dividing the liver mass into small units called lobules (O’Grady, Lake & Howdle, 2000).

The circulation of the blood into and out of the liver is of major importance in its function. The blood that perfuses the liver comes from two sources. Approximately 75% of the blood supply comes from the portal vein, which drains the GI tract and is rich in nu-trients. The remainder of the blood supply enters by way of the hepatic artery and is rich in oxygen. Terminal branches of these two blood supplies join to form common capillary beds, which constitute the sinusoids of the liver (Fig. 39-2). Thus, a mixture of venous and arterial blood bathes the liver cells (hepatocytes). The sinusoids empty into a venule that occupies the center of each liver lobule and is called the central vein. The central veins join to form the hepatic vein, which constitutes the venous drainage from the liver and empties into the inferior vena cava, close to the di-aphragm. Thus, there are two sources of blood flowing into the liver and only one exit pathway (O’Grady et al., 2000). 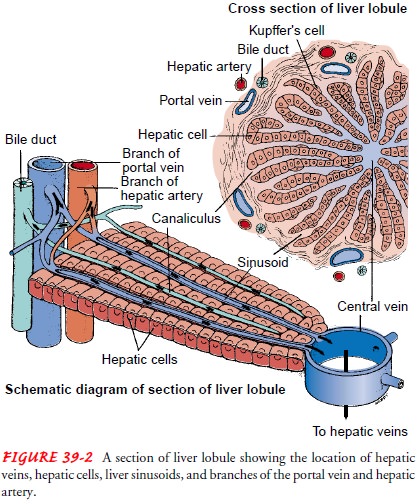 In addition to hepatocytes, phagocytic cells belonging to the reticuloendothelial system are present in the liver. Other organs that contain reticuloendothelial cells are the spleen, bone marrow, lymph nodes, and lungs. In the liver, these cells are called Kupf-fer cells. Their main function is to engulf particulate matter (such as bacteria) that enters the liver through the portal blood.

The smallest bile ducts, called canaliculi, are located between the lobules of the liver. The canaliculi receive secretions from the hepatocytes and carry them to larger bile ducts, which eventually form the hepatic duct. The hepatic duct from the liver and the cys-tic duct from the gallbladder join to form the common bile duct, which empties into the small intestine. The sphincter of Oddi, lo-cated at the junction where the common bile duct enters the duo-denum, controls the flow of bile into the intestine.