A significant proportion of cases of viral hepatitis are neither hepatitis A, hepatitis B, nor hepatitis D; as a result, they are classified as hepatitis C (formerly referred to as non-A, non-B hepatitis, or NANB hepatitis).

A significant proportion of cases of viral hepatitis are neither hep-atitis A, hepatitis B, nor hepatitis D; as a result, they are classified as hepatitis C (formerly referred to as non-A, non-B hepatitis, or NANB hepatitis). Whereas blood transfusions and sexual contact once accounted for most cases of hepatitis C in the United States, other parenteral means, such as sharing contaminated needles by IV/injection drug users and unintentional needlesticks and other injuries in health care workers, now account for a significant number of cases. There are approximately 35,000 new cases of hepatitis C in the United States each year. About 4 million per-sons (1.8% of the U.S. population) have been infected with HCV, making it the most common chronic blood-borne infec-tion nationally. A fourfold increase in the number of adults diag-nosed with HCV is projected from 1990 to 2015. The highest prevalence of hepatitis C is in adults 40 to 59 years of age, and in this age group its prevalance is highest in African Americans. There are 10,000 to 12,000 deaths each year in the United States due to hepatitis C; it has been suggested that these are underesti-mates. HCV is the underlying cause of about one-third of cases of hepatocellular carcinoma, and it is the most common reason for liver transplantation (NIH Consensus Conference, 2002).

Individuals at special risk for hepatitis C include IV/injection drug users, sexually active people with multiple partners, patients receiving frequent transfusions or those who require large vol-umes of blood, and health care personnel. The incubation period is variable and may range from 15 to 160 days. The clinical course of acute hepatitis C is similar to that of hepatitis B; symptoms are usually mild. A chronic carrier state occurs frequently, however, and there is an increased risk of chronic liver disease, including cirrhosis or liver cancer, after hepatitis C. Small amounts of alco-hol taken regularly appear to encourage progression of the dis-ease. Therefore, alcohol and medications that may affect the liver should be avoided (Chart 39-9). 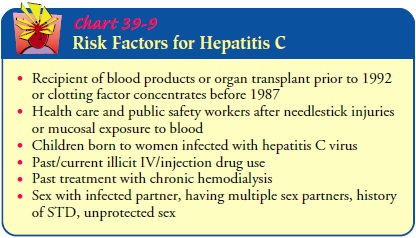 There is no benefit from rest, diet, or vitamin supplements. Re-cent studies have demonstrated that a combination of interferon (Intron-A) and ribavirin (Rebetol), two antiviral agents, is effective in producing improvement in patients with hepatitis C and in treating relapses. Some patients experience complete remission with combination therapy, which is the treatment of choice according to the FDA (Cheney, Chopra & Graham, 2000). He-molytic anemia, the most frequent side effect, may be severe enough to require discontinuation of treatment. Ribavirin must be used with caution in women of childbearing age. A molecule (poly-ethylene glycol moiety [PEG]) added to the interferon keeps it in the body longer without reducing its efficacy and extends the dos-ing interval to once a week. Pegylated interferon (Pegasys) is now available (Lauer & Walker, 2001; Sheffield et al., 2001).

Screening of blood has reduced the incidence of hepatitis as-sociated with blood transfusions, and public health programs are helping to reduce the number of cases associated with shared needles in illicit drug use.