Other Manifestations of Liver Dysfunction

Many patients with liver dysfunction develop generalized edema from hypoalbuminemia that results from decreased hepatic production of albumin.

OTHER MANIFESTATIONS OF LIVER DYSFUNCTION

Many patients with liver dysfunction develop generalized edema from hypoalbuminemia that results from decreased hepatic pro-duction of albumin. The production of blood clotting factors by the liver is also reduced, leading to an increased incidence of bruis-ing, epistaxis, bleeding from wounds, and, as described above, GI bleeding.

Decreased production of several clotting factors may be due, in part, to deficient absorption of vitamin K from the GI tract. This probably is caused by the inability of liver cells to use vitamin K to make prothrombin. Absorption of the other fat-soluble vitamins (vitamins A, D, and E) as well as dietary fats may also be impaired because of decreased secretion of bile salts into the intestine.Another group of problems common to patients with severe chronic liver dysfunction results from inadequate intake of suffi-cient vitamins. Among the specific deficiency states that occur on this basis are:

•        Vitamin A deficiency, resulting in night blindness and eye and skin changes

•        Vitamin C deficiency, resulting in the hemorrhagic lesions of scurvy

The threat of these avitaminoses provides the rationale for supplementing the diet of every patient with chronic liver disease (especially if alcohol-related) with ample quantities of vitamins A, B complex, C, and K and folic acid.

Abnormalities of glucose metabolism also occur; the blood glu-cose level may be abnormally high shortly after a meal (a diabetic-type glucose tolerance test result), but hypoglycemia may occur during fasting because of decreased hepatic glycogen reserves and decreased gluconeogenesis. Because the ability to metabo-lize medications is decreased, medications must be used cau-tiously and usual medication dosages must be reduced for the patient with liver failure.

Many endocrine abnormalities also occur with liver dys-function because the liver cannot metabolize hormones nor-mally, including androgens or sex hormones. Gynecomastia, amenorrhea, testicular atrophy, loss of pubic hair in the male, and menstrual irregularities in the female and other distur-bances of sexual function and sex characteristics are thought to result from failure of the damaged liver to inactivate estrogens normally.

Pruritus and Other Skin Changes

Patients with liver dysfunction resulting from biliary obstruction commonly develop severe itching (pruritus) due to retention of bile salts. Patients may develop vascular (or arterial) spider angiomas (Fig. 39-14) on the skin, generally above the waistline. These are numerous small vessels resembling a spider’s legs. These are most frequently associated with cirrhosis, especially in alcoholic liver dis-ease. Patients may also develop reddened palms (“liver palms” or palmar erythema). 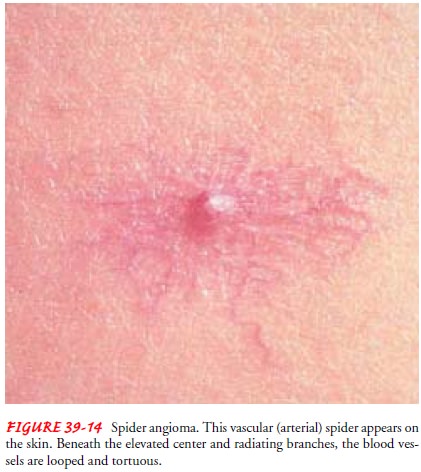