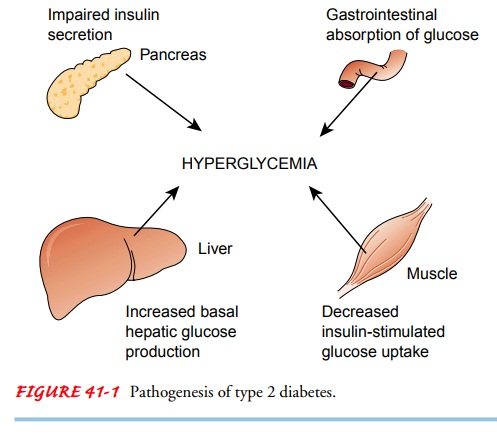 The two main problems related to insulin in type 2 diabetes are insulin resistance and impaired insulin secretion. Insulin resis-tance refers to a decreased tissue sensitivity to insulin. Normally, insulin binds to special receptors on cell surfaces and initiates a series of reactions involved in glucose metabolism. In type 2 dia-betes, these intracellular reactions are diminished, thus rendering insulin less effective at stimulating glucose uptake by the tissues and at regulating glucose release by the liver (Fig. 41-1). The exact mechanisms that lead to insulin resistance and impaired in-sulin secretion in type 2 diabetes are unknown, although genetic factors are thought to play a role. 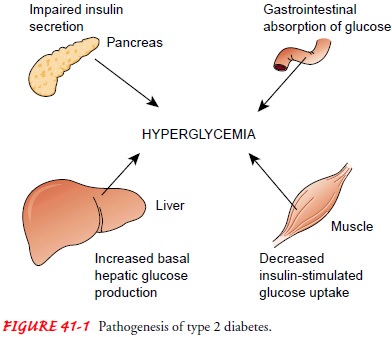 To overcome insulin resistance and to prevent the buildup of glucose in the blood, increased amounts of insulin must be se-creted to maintain the glucose level at a normal or slightly ele-vated level. However, if the beta cells cannot keep up with the increased demand for insulin, the glucose level rises, and type 2 diabetes develops.

Despite the impaired insulin secretion that is characteristic of type 2 diabetes, there is enough insulin present to prevent the breakdown of fat and the accompanying production of ketone bodies. Therefore, DKA does not typically occur in type 2 dia-betes. Uncontrolled type 2 diabetes may, however, lead to an-other acute problem, HHNS (see later discussion).

Type 2 diabetes occurs most commonly in people older than 30 years who are obese, although its incidence is increasing in younger adults (CDC, Diabetes Surveillance, 2002). Because it is associated with a slow (over years), progressive glucose intoler-ance, the onset of type 2 diabetes may go undetected for many years. If symptoms are experienced, they are frequently mild and may include fatigue, irritability, polyuria, polydipsia, skin wounds that heal poorly, vaginal infections, or blurred vision (if glucose levels are very high).

For most patients (approximately 75%), type 2 diabetes is detected incidentally (eg, when routine laboratory tests or ophthal-moscopic examinations are performed). One consequence of un-detected diabetes is that long-term diabetes complications (eg, eye disease, peripheral neuropathy, peripheral vascular disease) may have developed before the actual diagnosis of diabetes is made (ADA, Expert Committee on the Diagnosis and Classification of Diabetes Mellitus, 2003).

Because insulin resistance is associated with obesity, the pri-mary treatment of type 2 diabetes is weight loss. Exercise is also important in enhancing the effectiveness of insulin. Oral anti-diabetic agents may be added if diet and exercise are not success-ful in controlling blood glucose levels. If maximum doses of a single category of oral agents fail to reduce glucose levels to satis-factory levels, additional oral agents may be used. Insulin may be added to oral agent therapy, or patients may move to insulin ther-apy entirely. Some patients require insulin on an ongoing basis, and others may require insulin on a temporary basis during periods of acute physiologic stress, such as illness or surgery.

A recent report has demonstrated that type 2 diabetes can be prevented or delayed in persons at high risk for the disease through weight reduction and increased participation in moderate exercise (Diabetes Prevention Program Research Group, 2002). Metformin, one of the antidiabetic agents, also prevented or delayed the onset of type 2 diabetes, but to a lesser degree. The findings of this study support the role that weight reduction and exercise have in the prevention of type 2 diabetes (Chart 41-2).