Assessment and Management of Patients With Diabetes Mellitus

Diabetes mellitus is a group of metabolic diseases characterized by elevated levels of glucose in the blood (hyperglycemia) resulting from defects in insulin secretion, insulin action, or both.

Assessment and Management of Patients With Diabetes Mellitus

Diabetes mellitus is a group of metabolic diseases character-ized by elevated levels of glucose in the blood (hyperglycemia) resulting from defects in insulin secretion, insulin action, or both (American Diabetes Association [ADA], Expert Committee on the Diagnosis and Classification of Diabetes Mellitus, 2003). Normally a certain amount of glucose circulates in the blood. The major sources of this glucose are absorption of ingested food in the gastrointestinal (GI) tract and formation of glucose by the liver from food substances.

Insulin, a hormone produced by the pancreas, controls thelevel of glucose in the blood by regulating the production and storage of glucose. In the diabetic state, the cells may stop re-sponding to insulin or the pancreas may stop producing insulin entirely. This leads to hyperglycemia, which may result in acute metabolic complications such as diabetic ketoacidosis (DKA) and hyperglycemic hyperosmolar nonketotic syndrome (HHNS).Long-term effects of hyperglycemia contribute to macrovascular complications (coronary artery disease, cerebrovascular disease, and peripheral vascular disease), chronic microvascular compli-cations (kidney and eye disease), and neuropathic complications (diseases of the nerves).

Diabetes mellitus affects about 17 million people, 5.9 million of whom are undiagnosed. In the United States, approximately 800,000 new cases of diabetes are diagnosed yearly (Mokdad et al.,2000). Diabetes is especially prevalent in the elderly, with up to 50% of people older than 65 suffering some degree of glucose intolerance. Among adults in the United States, diagnosed cases of diabetes increased 49% from 1990 to 2000, and similar in-creases are expected to continue (Centers for Disease Control and Prevention [CDC], 2002).

Minority groups share a disproportionate burden of diabetes compared to non-minority groups. African-Americans and other racial and ethnic groups (Native Americans and persons of His-panic origin) are more likely than Caucasians to develop diabetes and are at greater risk for many of the complications and higher death rates due to diabetes than Caucasians (U.S. Public Health Service [USPHS], 2000; CDC, 2002). Chart 41-1 summarizes other risk factors for diabetes mellitus. 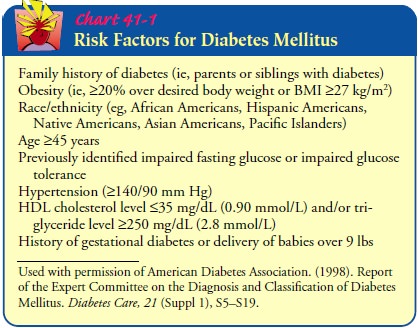 The far-reaching and devastating physical, social, and eco-nomic consequences of diabetes are as follows:

•        In the United States, diabetes is the leading cause of non-traumatic amputations, blindness among working-age adults, and end-stage renal disease (USPHS, 2000).

•        Diabetes is the third leading cause of death by disease, pri-marily because of the high rate of cardiovascular disease (myocardial infarction, stroke, and peripheral vascular dis-ease) among people with diabetes.

The economic cost of diabetes continues to rise because of in-creasing health care costs and an aging population. Half of all people who have diabetes and who are older than 65 are hospi-talized each year, and severe and life-threatening complications often contribute to the increased rates of hospitalization. Costs related to diabetes are estimated to be almost $100 billion annu-ally, including direct medical care expenses and indirect costs attributable to disability and premature death (CDC, 2002).

The primary goals of treatment for patients with diabetes in-clude controlling blood glucose levels and preventing acute and long-term complications. Thus, the nurse who cares for diabetic patients must assist them to develop self-care management skills.