DKA is caused by an absence or markedly inadequate amount of insulin.

DKA is caused by an absence or markedly inadequate amount of insulin. This deficit in available insulin results in disorders in the metabolism of carbohydrate, protein, and fat. The three main clinical features of DKA are:

Without insulin, the amount of glucose entering the cells is re-duced and the liver increases glucose production. Both factors lead to hyperglycemia. In an attempt to rid the body of the excess glucose, the kidneys excrete the glucose along with water and electrolytes (eg, sodium and potassium). This osmotic diuresis, which is characterized by excessive urination (polyuria), leads to dehydration and marked electrolyte loss. Patients with severe DKA may lose up to 6.5 liters of water and up to 400 to 500 mEq each of sodium, potassium, and chloride over a 24-hour period.

Another effect of insulin deficiency or deficit is the breakdown of fat (lipolysis) into free fatty acids and glycerol. The free fatty acids are converted into ketone bodies by the liver. In DKA there is excessive production of ketone bodies because of the lack of in-sulin that would normally prevent this from occurring. Ketone bodies are acids; their accumulation in the circulation leads to metabolic acidosis.

Three main causes of DKA are decreased or missed dose of in-sulin, illness or infection, and undiagnosed and untreated dia-betes (DKA may be the initial manifestation of diabetes). An insulin deficit may result from an insufficient dosage of insulin prescribed or from insufficient insulin being administered by the patient. Errors in insulin dosage may be made by patients who are ill and who assume that if they are eating less or if they are vomiting, they must decrease their insulin doses. (Because illness, especially infections, may cause increased blood glucose levels, pa-tients do not need to decrease their insulin doses to compensate for decreased food intake when ill and may even need to increase the insulin dose.)

Other potential causes of decreased insulin include patient error in drawing up or injecting insulin (especially in patients with visual impairments), intentional skipping of insulin doses (especially in adolescents with diabetes who are having difficulty coping with diabetes or other aspects of their lives), or equipment problems (eg, occlusion of insulin pump tubing).

Illness and infections are associated with insulin resistance. In response to physical (and emotional) stressors, there is an increase in the level of “stress” hormones—glucagon, epinephrine, nor-epinephrine, cortisol, and growth hormone. These hormones promote glucose production by the liver and interfere with glu-cose utilization by muscle and fat tissue, counteracting the effect of insulin. If insulin levels are not increased during times of ill-ness and infection, hyperglycemia may progress to DKA (Quinn, 2001c).

The signs and symptoms of DKA are listed in Figure 41-8. The hyperglycemia of DKA leads to polyuria and polydipsia (in-creased thirst). In addition, patients may experience blurred vi-sion, weakness, and headache. Patients with marked intravascular volume depletion may have orthostatic hypotension (drop in sys-tolic blood pressure of 20 mm Hg or more on standing). Volume depletion may also lead to frank hypotension with a weak, rapid pulse.

The ketosis and acidosis of DKA lead to GI symptoms such as anorexia, nausea, vomiting, and abdominal pain. The abdominal pain and physical findings on examination can be so severe that they resemble an acute abdominal disorder that requires surgery. Patients may have acetone breath (a fruity odor), which occurs with elevated ketone levels.

In addition, hyperventilation (with very deep, but not labored, respirations) may occur. These Kuss-maul respirations represent the body’s attempt to decrease the aci-dosis, counteracting the effect of the ketone buildup. In addition, mental status changes in DKA vary widely from patient to pa-tient. Patients may be alert, lethargic, or comatose, most likely depending on the plasma osmolarity (concentration of osmoti-cally active particles).

Evidence of ketoacidosis is reflected in low serum bicarbonate (0 to 15 mEq/L) and low pH (6.8 to 7.3) values. A low PCO2 level (10 to 30 mm Hg) reflects respiratory compensation (Kussmaul respirations) for the metabolic acidosis. Accumulation of ketone bodies (which precipitates the acidosis) is reflected in blood and urine ketone measurements.

Sodium and potassium levels may be low, normal, or high, depending on the amount of water loss (dehydration). Despite the plasma concentration, there has been a marked total body de-pletion of these (and other) electrolytes. Ultimately, these elec-trolytes will need to be replaced.

Elevated levels of creatinine, blood urea nitrogen (BUN), he-moglobin, and hematocrit may also be seen with dehydration. After rehydration, continued elevation in the serum creatinine and BUN levels will be present in the patient with underlying renal insufficiency.

For prevention of DKA related to illness, patients must be taught “sick day” rules for managing their diabetes when ill (Chart 41-9). The most important issue to teach patients is not to eliminate insulin doses when nausea and vomiting occur. Rather, they should take their usual insulin dose (or previously prescribed special “sick day” doses) and then attempt to con-sume frequent small portions of carbohydrates (including foods usually avoided, such as juices, regular sodas, and gelatin). Drinking fluids every hour is important to prevent dehydration. Blood glucose and urine ketones must be assessed every 3 to 4 hours. 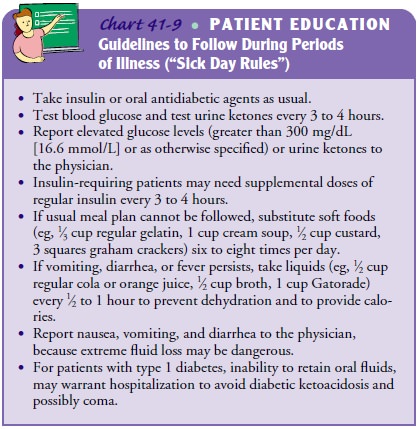 If the patient cannot take fluids without vomiting, or if ele-vated glucose or ketone levels persist, the physician must be con-tacted. Patients are taught to have available foods for use on sick days. In addition, a supply of urine test strips (for ketone testing) and blood glucose test strips should be available. Patients must know how to contact their physician 24 hours a day.

In addition to treating hyperglycemia, management of DKA is aimed at correcting dehydration, electrolyte loss, and acidosis (Quinn, 2001c).

In dehydrated patients, rehydration is important for maintaining tissue perfusion. In addition, fluid replacement enhances the ex-cretion of excessive glucose by the kidneys. Patients may need up to 6 to 10 liters of IV fluid to replace fluid losses caused by polyuria, hyperventilation, diarrhea, and vomiting.

Initially, 0.9% sodium chloride (normal saline) solution is ad-ministered at a rapid rate, usually 0.5 to 1 L per hour for 2 to 3 hours. Half-strength normal saline (0.45%) solution (also known as hypotonic saline solution) may be used for patients with hyper-tension or hypernatremia or those at risk for heart failure. After the first few hours, half-normal saline solution is the fluid of choice for continued rehydration, if the blood pressure is sta-ble and the sodium level is not low. Moderate to high rates of infusion (200 to 500 mL per hour) may continue for several more hours. When the blood glucose level reaches 300 mg/dL (16.6 mmol/L) or less, the IV fluid may be changed to dextrose 5% in water (D5W) to prevent a precipitous decline in the blood glucose level (ADA, Hyperglycemic Crisis in Patients with Dia-betes Mellitus, 2003).

Monitoring fluid volume status involves frequent measure-ments of vital signs (including monitoring for orthostatic changes in blood pressure and heart rate), lung assessment, and monitor-ing intake and output. Initial urine output will lag behind IV fluid intake as dehydration is corrected. Plasma expanders may be necessary to correct severe hypotension that does not respond to IV fluid treatment. Monitoring for signs of fluid overload is es-pecially important for older patients, those with renal impair-ment, or those at risk for heart failure.

•        Insulin administration, which enhances the movement of potassium from the extracellular fluid into the cells.

Cautious but timely potassium replacement is vital to avoid dysrhythmias that may occur with hypokalemia. Up to 40 mEq per hour may be needed for several hours. Because extracellular potassium levels drop during DKA treatment, potassium must be infused even if the plasma potassium level is normal.

Frequent (every 2 to 4 hours initially) electrocardiograms and laboratory measurements of potassium are necessary during the first 8 hours of treatment. Potassium replacement is withheld only if hyperkalemia is present or if the patient is not urinating.

Ketone bodies (acids) accumulate as a result of fat breakdown. The acidosis that occurs in DKA is reversed with insulin, which inhibits fat breakdown, thereby stopping acid buildup. Insulin is usually infused intravenously at a slow, continuous rate (eg, 5 units per hour). Hourly blood glucose values must be mea-sured. IV fluid solutions with higher concentrations of glucose, such as normal saline (NS) solution (eg, D5NS or D50.45NS), are administered when blood glucose levels reach 250 to 300 mg/dL (13.8 to 16.6 mmol/L) to avoid too rapid a drop in the blood glucose level.

Various IV mixtures of regular insulin may be used. The nurse must convert hourly rates of insulin infusion (frequently pre-scribed as “units per hour”) to IV drip rates. For example, if 100 units of regular insulin are mixed in 500 mL 0.9% NS, then 1 unit of insulin equals 5 mL. Thus, an initial insulin infusion rate of 5 units per hour would equal 25 mL per hour. The insulin is often infused separately from the rehydration solutions to allow frequent changes in the rate and content of rehydration solutions.

Insulin must be infused continuously until subcutaneous administration of insulin resumes. Any interruption in administration may result in the reaccumulation of ketone bodies and worsening acidosis. Even if blood glucose levels are dropping to normal, the insulin drip must not be stopped; rather, the rate or concentration of the dextrose infusion should be increased. Blood glucose levels are usually corrected before the acidosis is corrected. Thus, IV insulin may be continued for 12 to 24 hours until the serum bicarbonate level improves (to at least 15 to 18 mEq/L) and until the patient can eat. In general, bicarbonate infusion to correct severe acidosis is avoided during treatment of DKA be-cause it precipitates further, sudden (and potentially fatal) de-creases in serum potassium levels. Continuous insulin infusion is usually sufficient for reversing DKA.

Nursing care of the patient with DKA focuses on monitoring fluid and electrolyte status as well as blood glucose levels; admin-istering fluids, insulin, and other medications; and preventing other complications such as fluid overload. Urine output is mon-itored to ensure adequate renal function before potassium is ad-ministered to prevent hyperkalemia. The electrocardiogram is monitored for dysrhythmias indicating abnormal potassium lev-els. Vital signs, arterial blood gases, and other clinical findings are recorded on a flow sheet. The nurse documents the patient’s lab-oratory values and the frequent changes in fluids and medications that are prescribed and monitors the patient’s responses. As DKA resolves and the potassium replacement rate is decreased, the nurse makes sure that:

•        There are no signs of hyperkalemia on the electrocardio-gram (tall, peaked [or tented] T waves).

•        The laboratory values of potassium are normal or low.

As the patient recovers, the nurse reassesses the factors that may have led to DKA and teaches the patient and family about strategies to prevent its recurrence (Quinn, 2001c). If indicated,the nurse initiates a referral for home care to ensure the patient’s continued recovery.