There are several different types of diabetes mellitus; they may differ in cause, clinical course, and treatment.

There are several different types of diabetes mellitus; they may differ in cause, clinical course, and treatment. The major classifi-cations of diabetes are:

•        Diabetes mellitus associated with other conditions or syndromes

The terms “insulin-dependent diabetes” and “non-insulin-dependent diabetes” and their acronyms (IDDM and NIDDM, respectively) are no longer used because they have resulted in clas-sification of patients on the basis of the treatment of their diabetes rather than the underlying etiology. Use of Roman numerals (type I and type II) to distinguish between the two types has been changed to type 1 and type 2 to reduce confusion (ADA, Expert Committee on the Diagnosis and Classification of Diabetes Mel-litus, 2003).Approximately 5% to 10% of people with diabetes have type 1 diabetes, in which the insulin-producing pancreatic beta cells are destroyed by an autoimmune process. As a result, they produce little or no insulin and require insulin injections to control their blood glucose levels. Type 1 diabetes is characterized by an acute onset, usually before age 30 (CDC, Diabetes Surveillance, 1999).

Approximately 90% to 95% of people with diabetes have type 2 diabetes (CDC, Data Factsheet, 2002), which results from decreased sensitivity to insulin (called insulin resistance) and im-paired beta cell functioning resulting in decreased insulin pro-duction (Quinn, 2001a). Type 2 diabetes is first treated with diet and exercise. If elevated glucose levels persist, diet and exercise are supplemented with oral hypoglycemic agents. In some individu-als with type 2 diabetes, oral agents do not control hyperglycemia, and insulin injections are required. In addition, some individuals whose type 2 diabetes can usually be controlled with diet, exercise, and oral agents may require insulin injections during periods of acute physiologic stress (eg, illness or surgery). Type 2 diabetes occurs more among people who are older than 30 years and obese (Diabetes Information Clearing House, 2001).

Diabetes complications may develop in any person with type 1 or type 2 diabetes, not only in patients who take insulin. Some patients with type 2 diabetes who are treated with oral medica-tions may have the impression that they do not really have dia-betes or that they simply have “borderline” diabetes. They may believe that, compared with diabetic patients who require insulin injections, their diabetes is not a serious problem. It is important for the nurse to emphasize to these individuals that they do have diabetes and not a borderline problem with sugar (glucose). Borderline diabetes is classified as impaired glucose tolerance(IGT) or impaired fasting glucose (IFG) and refers to a condi-tion in which blood glucose levels fall between normal levels and levels considered diagnostic for diabetes. 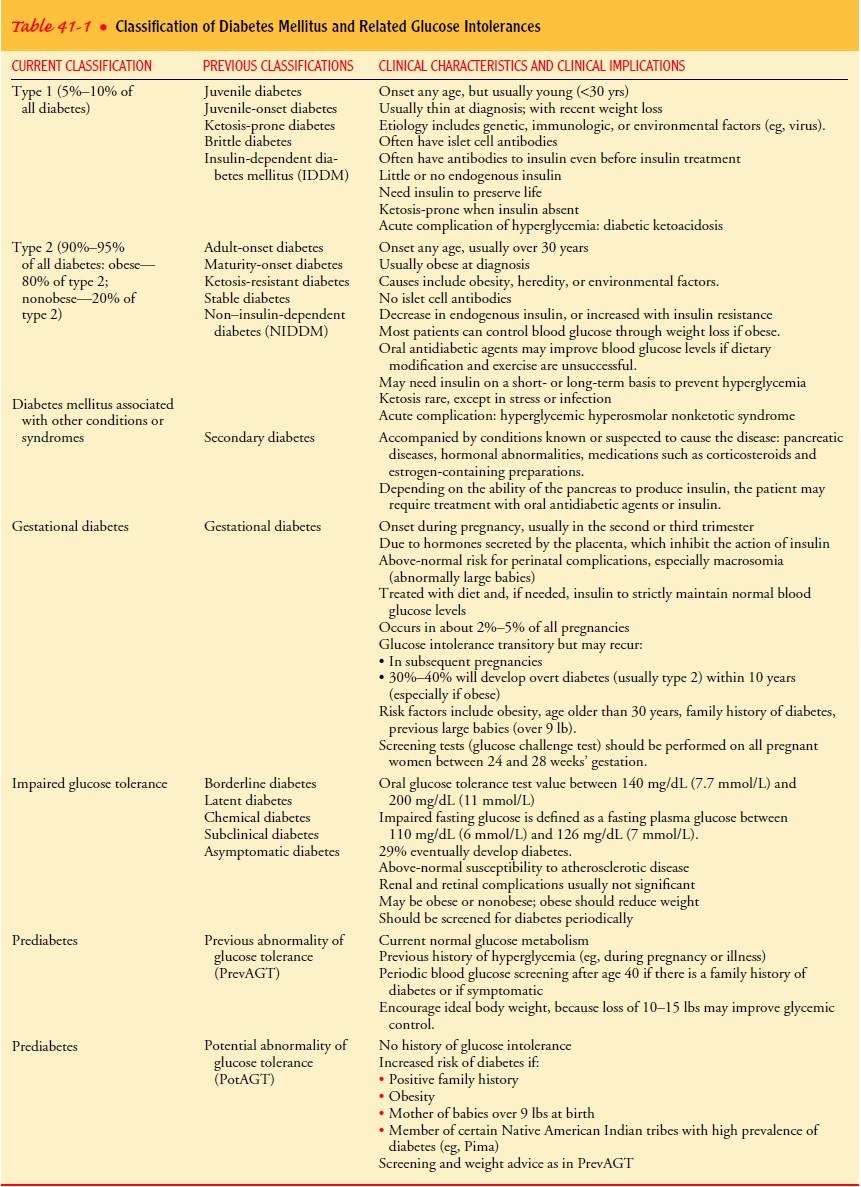 Table 41-1 summarizes the major classifications of diabetes, current terminology, old labels, and major clinical characteristics. This classification system is dynamic in two ways. First, research findings suggest many differences among individuals within each category. Second, except for those with type 1 diabetes, patients may move from one category to another. For example, a woman with gestational diabetes may, after delivery, move into the type 2 category. These types also differ in their etiology, clinical course, and management.