Gestational diabetes is any degree of glucose intolerance with its onset during pregnancy.

Gestational diabetes is any degree of glucose intolerance with its onset during pregnancy. Hyperglycemia develops during preg-nancy because of the secretion of placental hormones, which causes insulin resistance. For women who meet one or more of the fol-lowing criteria, selective screening for diabetes during pregnancy is now being recommended between the 24th and 28th weeks of gestation: age 25 years or older; age 25 years or younger and obese; family history of diabetes in first-degree relatives; or member of an ethnic/racial group with a high prevalence of dia-betes (eg, Hispanic American, Native American, Asian American, African American, or Pacific Islander).

Clinical manifestations of all types of diabetes include the “three Ps”: polyuria, polydipsia, and polyphagia. Polyuria (increased uri-nation) and polydipsia (increased thirst) occur as a result of the excess loss of fluid associated with osmotic diuresis. The patient also experiences polyphagia (increased appetite) resulting from the catabolic state induced by insulin deficiency and the break-down of proteins and fats. Other symptoms include fatigue and weakness, sudden vision changes, tingling or numbness in hands or feet, dry skin, skin lesions or wounds that are slow to heal, and recurrent infections. The onset of type 1 diabetes may also be as-sociated with sudden weight loss or nausea, vomiting, or abdom-inal pains, if DKA has developed.

An abnormally high blood glucose level is the basic criterion for the diabetes diagnosis. Fasting plasma glucose (FPG) levels of 126 mg/dL (7.0 mmol/L) or more or random plasma glucose levels exceeding 200 mg/dL (11.1 mmol/L) on more than one occasion are diagnostic of diabetes. The oral glucose tolerance test and the intravenous glucose tolerance test are no longer recom-mended for routine clinical use. See Chart 41-3 for the ADA’s di-agnostic criteria for diabetes mellitus (ADA, Expert Committee on the Diagnosis and Classification of Diabetes Mellitus, 2003). 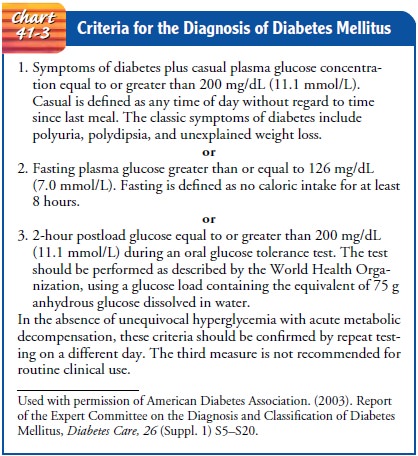 Plasma glucose values may be 10% to 15% higher than whole blood values, which are obtained with finger sticks (Porth, 2002). In addition to the assessment and diagnostic evaluation per-formed to diagnose diabetes, ongoing specialized assessment of patients with known diabetes and evaluation for complications in patients with newly diagnosed diabetes are important compo-nents of care. Parameters that should be regularly assessed are dis-cussed in Chart 41-4. 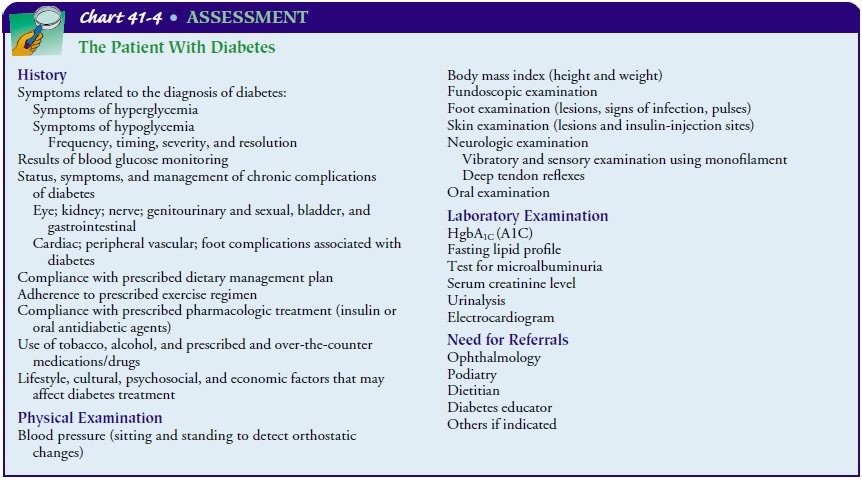 Elevated blood glucose levels appear to be age-related and occur in both men and women throughout the world. Elevated blood glucose levels commonly appear in the fifth decade of life and increase in frequency with advancing age. When elderly people with overt diabetes are excluded from the statistics, approximately 10% to 30% of elderly people have age-related hyperglycemia. What causes age-related changes in carbohydrate metabolism is unresolved. Possibilities include poor diet, physical inactivity, a decrease in the lean body mass in which ingested carbohydrate may be stored, altered insulin secretion, and increase in fat tissue, which increases insulin resistance.