The Functions of Emotion 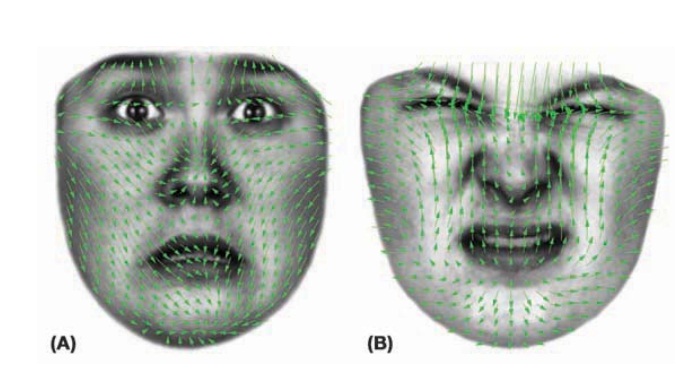 As we have seen, emotions consist of coordinated changes in behavior, experience, and physiology.

The Functions of Emotion

As we have seen, emotions consist of coordinated changes in behavior, experience, and physiology. Why is this? Is it possible that these interwoven effects were somehow use-ful to our ancestors, and so favored by evolution (Tooby & Cosmides, 1990)? One way to pursue this issue is to look at the consequences of emotion and to ask whether they benefit us.

Some aspects of our emotions plainly do help us—or, perhaps, helped our ancient ancestors. Fear, for example, is associated with sympathetic nervous system activity that prepares large muscles for fighting or fleeing (Frijda, 1986); these are exactly the bod-ily adjustments we would want for fending off (or escaping) a fearful encounter. Likewise, consider joy. In one study, participants had to prepare a speech that they believed would be videotaped and evaluated by judges (Fredrickson et al., 2000). Following this stressful task, the participants were randomly assigned to view a film clip that elicited joy, a neutral film clip, or a film clip that elicited sadness. The data showed that participants who had viewed the joy clip showed substantially greater cardiovascu-lar recovery from their speech than did participants who had watched either the neutral or the sad clip. This finding seems to suggest that joy (and other positive emotions) can help us recover from stress.

In addition to these physiological effects, emotions also involve a variety of changes in how we perceive and think about the environment around us. Perceptual effects of fear include an increased intake of sensory information including widening of the eyes and greater nasal volume, while disgust involves a decreased sensory intake, including narrowing of the eyes and decreased nasal volume (Susskind et al., 2008; Figure 12.35). Emotions affect later information processing, too. Positive emotions like joy seem to lead us to greater cognitive flexibility and a broader focus, relying less on the details of a situation and more on top-down, schematic processing (Fredrickson, 1998). Negative emotions, in contrast, seem to focus our attention more narrowly—on specific aspects of a situation. Why should this be? Anger, for example, may focus our attention on the obstacle preventing us from reaching our goal; this may be exactly the right focus if we want to remove that obstacle in some way. Fear, in contrast, may focus our attention on the likely outcomes of a situation; again, this may be the right focus if we want to maximize our motivation to avoid this outcome (L. J. Levine & Pizarro, 2004; Phelps, 2006). 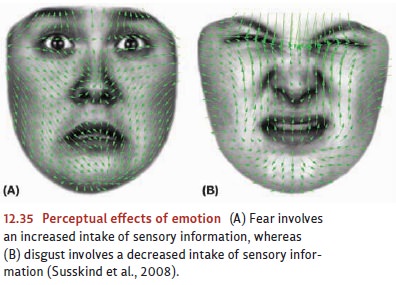 Emotions also have a powerful effect on memory, as we mentioned in the Prologue, and this brings its own benefits. Emotional events are likely to be conse-quential ones, involving great opportunities, for example, or powerful threats. We would be well served, therefore, by remembering these events well, and emotion seems to promote this recollection. Several mechanisms probably contribute to this point, including the changes in our body chemistry that accompany emotion and activation of the amygdala, a common feature of several emotions. These mecha-nisms may together promote the process of memory consolidation, the biological process through which memories are established in permanent storage (T. W. Buchanan & Adolphs, 2004; Dolcos, LaBar, & Cabeza, 2006; Kilpatrick & Cahill, 2003; McGaugh, 2003; Reisberg & Hertel, 2004).

Emotions also serve interpersonal functions. One example is the way expressions of emotion indicate social intent (Fridlund, 1994). When we smile, for example, we signal that we are open to interacting with other people. When we scowl, we communicate “Back off !” When we burst into tears, we indicate that we need help (J. J. Gross, Fredrickson, & Levenson, 1994). Another example is the way emotion expressions facil-itate group functioning. When we show embarrassment, we indicate to others that we know we have done something inappropriate (Keltner & Buswell, 1997). This signal has the effect of making amends for the gaffe. At the same time, embarrassment is a highly aversive state, and feels in the moment like a real calamity. The function of embarrass-ment may therefore be not only to repair social damage, but also to motivate us to avoid the same behavior in the future. Even expressions of pride—at least when they are appropriate to one’s performance—are associated with leadership in group problem-solving (L. A. Williams & DeSteno, 2008).