Cultural and Cognitive Aspects of Sexuality

Cultural and Cognitive Aspects of Sexuality

Sex is everywhere—in billboard advertisements, on television, in movies, and in supermarket tabloids (Figure 12.20). Do these sexually charged images encourage sexual feelings and behaviors? Or do they give vent to our sexual desires and thereby decrease our sexual behavior? 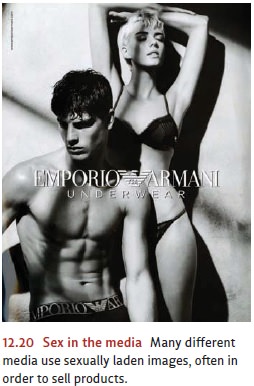 Does this arousal actually encourage sexual behavior? Findings on this point have been mixed, but it appears that exposure to such material does, for at least a few hours, increase the likelihood of engaging in sexual behavior (Both, Spiering, Everaerd, & Laan, 2004). Much more concerning, however, have been findings from studies of the effects of sexually explicit material on sexual attitudes. In one study, Zillmann and Bryant (1988) found that viewing sexually explicit films made participants less satisfied with their partner’s appearance and sexual performance. Far more troubling, films of women being sexually coerced increased male participants’ willingness to harm women (Zillman, 1989). In short, then, pornography may have a small effect in encouraging sexual behavior, but it may have a larger effect on perceptions, and, worst of all, violent pornography has a more powerful effect in encouraging sexual aggression.

In most cultures in the modern world, both men and women are selective in choosing their sexual partners, and mating usually happens only when both partners consent. However,  the sexes differ in the criteria they use in making their choices (Figure 12.21). According to a number of surveys, the physical attractiveness of the partner seems more important to men than to women, while the social and financial status of the partner matters more to women than it does to men. It also appears that men generally prefer younger women, whereas women prefer older men. The data also indicate that all of these male-female differences are found in many countries, including the United States, China, India, France, Nigeria, and Iran (D. M. Buss, 1989, 1992; D. M. Buss & Barnes, 1986). 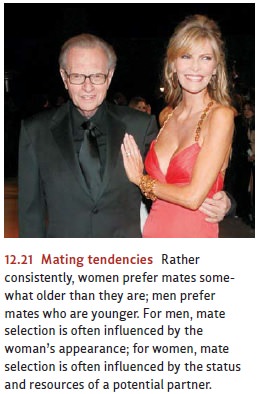 How should we think about all of these points? In earily, we looked closely at the evolutionary account: An attractive woman is likely to be healthy and fertile, so a male selecting an attractive partner would increase his chances of reproductive success. Likewise, a younger woman will have more reproductive years ahead of her, so a male choosing a younger partner could plausibly look forward to more offspring. Any male selecting his mates based on their youth and beauty would be more likely than other males to have many healthy offspring to pass along his genes. Thus, through the process of natural selection these preferences eventually would become widespread among the males of our species.

The female’s preferences are also sensible from an evolutionary perspective. Because of her high investment in each child (at the least, 9 months of carrying the baby in her womb, and then months of nursing), she can maximize the chance of passing along her genes to future generations by having just a few offspring and doing all she can to ensure the survival of each. A wealthy, high-status mate would help her reach this goal, because he would be able to provide the food and other resources their children need. Thus, there would be a reproductive advantage associated with a preference for such a male, and so a gradual evolution toward all females in the species having this preference (Bjorklund & Shackelford, 1999; Buss, 1992; Schmitt, 2005).

We also noted that cultural factors play an important role. For example, in many cultures human females only come to prefer wealthy, high-status males because the females have learned, across their lifetimes, the social and economic advantages they will gain from such a mate. In these cultures, women soon learn that their profes-sional and educational opportunities are limited, and so “marrying wealth” is their best strategy for gathering resources for themselves and their young.

The importance of culture becomes clear when we consider cultures that provide more opportunities for women. In these cultures, “marrying wealth” is not a woman’s only chance for economic and social security, so a potential husband’s resources become correspondingly less important in mate selection. Various studies confirm this predic-tion and show that in cultures that afford women more opportunities, women attach less priority to a male’s social and economic status (Kasser & Sharma, 1999; also see Baumeister & Vohs, 2004; Buller, 2005; Eagly & Wood, 1999; W. Wood & Eagly, 2002).

In short, there seems to be considerable consistency in mating preferences and a contrast between the criteria males and females typically use. This consistency has been documented in many cultures and across several generations. But there are also varia-tions in mate-selection preferences that are clearly attributable to the cultural context. These data clearly illustrate the interplay of biological and cultural factors that governs our motivational and emotional states.