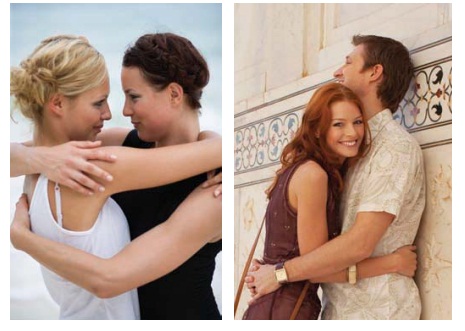 So far, we have touched upon many different physiological and social aspects of sexual behavior.

So far, we have touched upon many different physiological and social aspects of sexual behavior. However, up to this point, we have neglected one very impor-tant question: What determines our sexual orientation?

The roots of someone’s sexuality are established well before ado-lescence. As early as age 3 or 4, children start to have feelings of attrac-tion (Bell, Weinberg, & Hammersmith, 1981). The first real sexual attraction, however, usually begins by age 10 or so (Herdt & McClintock, 2000), and children of this age often imagine star-struck romances (R. Green, 1979; Zuger, 1984). These feelings soon crystallize, and, by early adolescence, with the onset of puberty and an increased emphasis on social relations outside the family, sexual orientation becomes explicit, and actions based on the orientation become common (Figure 12.22). 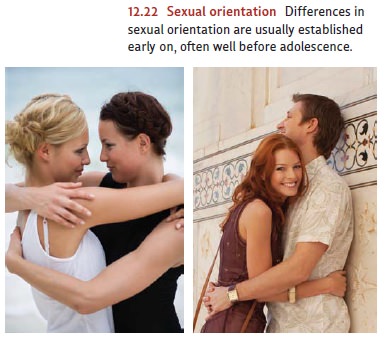 (Kinsey, Pomeroy, & Martin, 1948). The prevalence of exclusive homosexuality reported by women was lower—about 2% (Kinsey, Pomeroy, Martin, & Gebhard, 1953). A sub-stantially larger group (13% of American men and 7% of women) described themselves as predominantly homosexual but had also had some heterosexual experience. More recent surveys confirm Kinsey’s estimates, both in the United States and in other Western cultures (see, for example, ACSF Investigators, 1992; A. M. Johnson, Wadsworth, Wellings, Bradshaw, & Field, 1992; for some complications, though, see Savin-Williams, 2006).

But how do genes influence sexual orientation? The mechanism probably involves the levels of prenatal hormones, especially the male hormone androgen. Part of the evidence on this point comes from androgenized females—those who were exposed in the uterus to high androgen levels—who are far more likely than others to describe themselves as homosexual or bisexual (37%). In these women, the high androgen levels are produced by a specific genetic pattern, but the same hormonal patterns can be produced by many other factors. In all cases, these shifts in hormone levels during pre-natal development seem to influence sexual orientation (Dittman, Kappes, & Kappes, 1992; Ellis & Ames, 1987; Hines, 2004; Zucker, 2001).

If genes were the whole story, though, then identical twins (with 100% of the same genes) would show 100% resemblance in their sexual orientation; instead, the concor-dance rate is just 52%. Obviously, therefore, factors other than the genes matter, but no one is yet sure what these other factors are. Many hypotheses have been offered, but most of these are plainly wrong. For example, there is no evidence that especially strong fathers, or especially weak fathers, are more likely to have homosexual offspring. There is also no evidence that homosexuality derives from some sort of imitation; children who grow up with gay or lesbian parents are no more likely to be homosexual them-selves (M. Bailey & Zucker, 1995; Golombok & Tasker, 1996).

What we do know is that the main predictor of adult homosexuality is the way people felt about sexuality when they were younger. As we mentioned earlier, sexual orientation can be detected in middle childhood—and certainly before the individ-ual experiences any sexual encounters, homosexual or heterosexual. Indeed, people of any sexual orientation might well identify with the sentiment voiced by many homosexuals when they report simply that “I’ve been that way all my life” (Saghir & Robins, 1973).

Overall, then, we still have much to learn about what makes someone homosexual, heterosexual, or bisexual. Genes are certainly relevant, but we are still figuring out what the rest of the story involves. Whatever the origins of sexual orientation, though, it bears emphasizing that a homosexual (or bisexual) orientation is not a psychological disorder or defect. These orientations are “abnormal” only in the limited sense of being different from the majority. Many other traits are “abnormal” in exactly the same sense—being left-handed, for example. Gays, lesbians, and bisexuals are neither better nor worse than heterosexuals, and the factors that matter for their relationship quality and stability seem to be exactly the same as those that matter for heterosexual couples (Kurdek, 2005). Their number includes great painters (Leonardo da Vinci), athletes (Martina Navratilova), musicians (Aaron Copland), writers (Oscar Wilde, Gertrude Stein), mathematicians and scientists (Alan Turing, Alfred Kinsey himself ), philoso-phers (Wittgenstein), and warriors (Alexander the Great), but the great majority are ordinary people with ordinary lives. The same no doubt holds for left-handers—and for heterosexuals.