Cultural and Cognitive Aspects of Hunger and Eating

The hypothalamus and other biological structures play a crucial role in deciding when and how much we eat. But other factors are also critical, including the culture in which we live.

Cultural and Cognitive Aspects of Hunger and Eating

The hypothalamus and other biological structures play a crucial role in deciding when and how much we eat. But other factors are also critical, including the culture in which we live.

Why do many Europeans feel hungry for their main meal of the day in the early after-noon, while others on the continent—the French, for example—hunger for their main meal only in the evening? Why is it that most Americans grow hungry for dinner at 6:00 p.m. or so, while the British are likely to seek food a couple of hours earlier, at tea-time? These questions surely cannot be answered in terms of differences among French, American, or British livers, or geographical variation in how the hypothalamus is wired. Instead these points remind us that our feeding patterns are shaped by our cultural environment.

Culture also governs how much we eat. Many of us put considerable effort into con-trolling our food intake, usually with the aim of achieving a particular appearance. But what defines the ideal toward which people are striving? The answer lies in the cultural setting, and cultures set quite different standards. The women painted by Rubens, Matisse, and Renoir, for example, were considered the feminine ideal in their day, and all three artists (two of them living just a century ago) would probably judge today’s supermodels to be undernourished and quite unappealing (Figure 12.8). 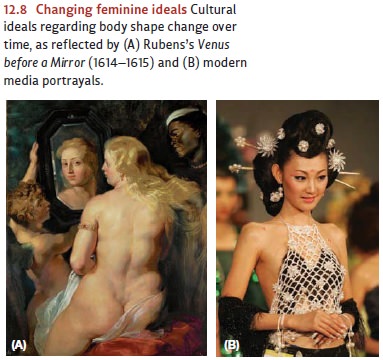 Cultural factors provide a constant backdrop for our thinking, expectations, and per-ceptions. But we are also influenced by specific situations. As one example, let’s note that there are direct social influences on feeding, so that we are more likely to eat when we are surrounded by others who are eating. The classic demonstration of this comes from an experiment done years ago; it showed that a hen who has had her fill of grain will eagerly resume her meal if joined by other hens that are still hungry (Bayer, 1929). Similar effects can easily be observed with humans.

Social influences are also tied to people’s aspirations (and some-times unhealthy aspirations) toward thinness. In ways we will discuss, each of us is powerfully influenced by the people around us, so that how we act and, indeed, what we think about our-selves are shaped by how they perceive us and what they expect from us. The simple fact is that how people perceive us, and what they expect, are shaped by our bodily form—in particular, how heavy or thin we are.

One more factor influences our eating, and it is perhaps a surprising one. It turns out that whether we eat or not is influenced by what we remember—in particular, our mem-ory for what else we have eaten recently. This was evident, as we saw in the Prologue, when patients suffering from clinical amnesia were presented with several lunches in a row, with just enough time between lunches so that the patients completely forgot they had eaten. Without that memory, patients proceeded to eat one lunch right after another. This suggests that our subjective experience of hunger, as well as our eating behavior, is powerfully shaped by our memory for how long it has been since our last meal.