The physiological and cognitive mechanisms regulating an organism’s food intake work remarkably well—but not perfectly. We see this in the fact that organisms (humans in particular!) can end up either weighing far more than is healthy for them or weighing too little. In some cases, the person is underweight because—tragically—poverty and malnutrition are common problems in many parts of the world (including nations that we would otherwise consider relatively wealthy). Even when food is available, though, people can end up underweight. Here, we deal with the more common problem in the Western world: obesity, a problem so widespread that the World Health Organization has classified obesity as a global epidemic (Ravussin & Bouchard, 2000).

Obesity is sometimes defined as a body weight that exceeds the average for a given height by 20%. More commonly, though, researchers use a definition cast in terms of the Body Mass Index (BMI), defined as someone’s weight in kilograms divided by the square of his height in meters (Figure 12.9). A BMI between 18.5 and 24.9 is considered normal. A BMI between 25 and 30 counts as overweight, and a BMI of 30 or more is considered obese. A BMI over 40 defines morbid obesity—the level of obesity at which someone’s health is genuinely at risk. For most people, morbid obesity means a weight roughly 100 pounds (45.3 kg) beyond their ideal. 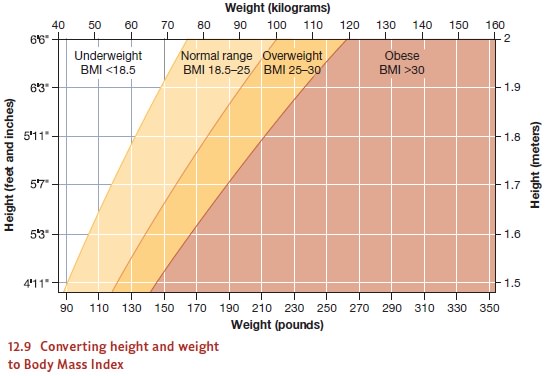 Why do people become obese? The simplest hypothesis is that some people eat too much. In this view, obesity might be understood as the end result of self-indulgence, or perhaps the consequence of an inability to resist temptation. This hypothesis makes it seem like people could be blamed for their obesity, like the condition is, in essence, their own fault. Such a view of obesity, however, is almost certainly a mistake, because it ignores the powerful forces that can put someone on the path toward obesity in the first place. Although people do have considerable control over what and how much they eat, the evidence suggests that some people are strongly genetically predisposed toward obesity.

One long-term study examined 12 pairs of male identical twins. Each of these men ate about 1,000 calories per day above the amount required to maintain his initial weight. The activities of each participant were kept as close to equivalent as possible, and there was very little exercise. This regimen continued for 100 days. Needless to say, all 24 men gained weight, but the amounts they gained varied substantially, from about 10 to 30 pounds. The men also differed in terms of where on their bodies the weight was deposited. For some participants, it was the abdomen; for others, it was the thighs and buttocks. Crucially, though, the amount each person gained was statistically related to the weight gain of his twin (Figure 12.10). The twins also tended to deposit the weight in the same place. If one developed a prominent paunch, so did his twin; if another deposited the fat in his thighs, his twin did, too (Bouchard, Lykken, McGue, Segal, & Tellegen, 1990; also see Herbert et al., 2006).

It seems, therefore, that the tendency to turn extra calories into fat has a genetic basis. In fact, several mechanisms may be involved in this pattern, so that, in the end, obesity can arise from a variety of causes. For example, some people seem to be less sen-sitive to the appetite-reducing signals from leptin and thus are more vulnerable to the effects of appetite stimulants such as NPY (J. Friedman, 2003). For these people, a 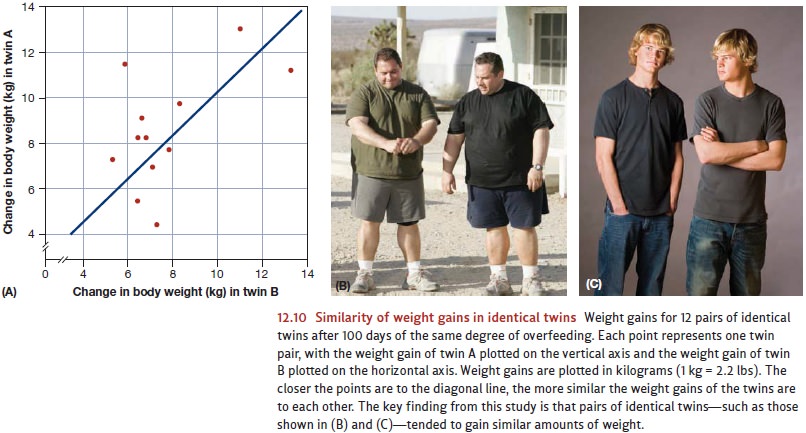 tendency to overeat may be genetically rooted. In addition, people differ in the effi-ciency of their digestive apparatus, with some people simply extracting more calories from any given food. People also differ in their overall metabolic level; if, as a result, less nutrient fuel is burned up, then more is stored as fat (Astrup, 2000; also M. I. Friedman, 1990a, b; Sims, 1986).

Given these various mechanisms, should we perhaps think about obesity as some sort of genetic defect, a biologically rooted condition that leads to substantial health risk? Proponents of the “thrifty gene” hypothesis emphatically reject this suggestion. They note that our ancestors lived in times when food supplies were unpredictable and food shortages were common, so natural selection may have favored individuals who had especially inefficient metabolisms and, as a result, stored more fat. These individu-als would have been better prepared for lean times and thus may have had a survival advantage. As a result, the genes leading to this fat storage might have been assets, not defects (J. Friedman, 2003; Fujimoto et al., 1995; Groop & Tuomi, 1997; Ravussin, 1994).

Clearly, then, “thrifty genes” might have helped our ancestors to maintain a healthy body weight, but our ancestors lived in a time in which food was scarce. The same genes will have a different outcome in modern times—especially for people living in an afflu-ent culture in which a quick trip to the supermarket provides all the calories one wishes. In this modern context, the “thrifty genes” can lead to levels of obesity that create seri-ous health problems.

Whether for genetic reasons, though, or otherwise, the evidence is clear that obesity rates are climbing across the globe. In the United States, roughly 23% of the population in 1991 was obese; more recent estimates of the rate—30%—are appreciably higher (J. Friedman, 2003). Similar patterns are evident in other countries. Over the last 10 years, for example, the obesity rates in most European countries have increased by at least 10%, and, in some countries, by as much as 40%. These shifts cannot reflect changes in the human genome; genetic changes proceed at a much slower pace. Instead, the increase has to be understood in terms of changes in diet and activity level—with people consuming more calorically dense, high-fat foods and living a lifestyle that causes them to expend relatively few calories in their daily routines.

This increase in obesity rates is associated with increased rates of many health problems, including heart attack, stroke, Type 2 diabetes, and some types of cancer. The debate continues over the severity of these risks for people with moderate levels of obesity—e.g., a BMI between 30 and 40 (Couzin, 2005; Yan et al., 2006). There is no debate, however, about the health risks of so-called morbid obesity (a BMI of 40 or higher), and this makes the worldwide statistics on obesity a serious concern for health professionals.