Sexual behavior in animals is ultimately about arranging for the union of sperm and ova, but this can proceed only after male and female have met, courted, and determined each other to be a suitable mate.

Sexual behavior in animals is ultimately about arranging for the union of sperm and ova, but this can proceed only after male and female have met, courted, and determined each other to be a suitable mate. At that point, at least for terrestrial mammals and birds, the male generally introduces his sperm cells into the genital tract of the female. The sperm then has to encounter a ready ovum, and finally, the fertilized egg can develop if it is provided with the appropriate conditions. For now, we note that the sequence of events requires a complex hormonal control system that links the brain, reproductive organs, and behavior.

In sex, timing is everything. Most animals are sexually receptive, and both biologically and behaviorally prepared to mate, only at certain points in the year. In mammals, this period of sexual receptivity is known as estrus, and how often it occurs depends on the species. Female rats, for example, go through a 15-hour estrus period every four days. At all other times, they will resolutely reject any male’s advances. If a male nuzzles a female who is not in estrus or tries to mount, she will kick and bite him. But during estrus, the female responds quite differently to the male’s approach. She first retreats in small hops, then stops to look back and wiggles her ears (McClintock & Adler, 1978). Eventually, she stands still, her back arched, her tail held to the side—a willing sexual partner.

The mechanism that causes this change in the female’s behavior is an interlocking system of hormonal and neurological controls that involves the pituitary gland, the hypothalamus, and the ovaries. There are three phases (Figure 12.18). During the first phase, follicles (ova-containing sacs) in the ovary mature under the influence of pitu-itary secretions. The follicles produce the sex hormone estrogen. As the concentration of estrogen in the bloodstream rises, the hypothalamus responds by directing the pituitary to change its secretions. In consequence, follicle growth is accelerated until the follicle ruptures and releases the mature ovum. 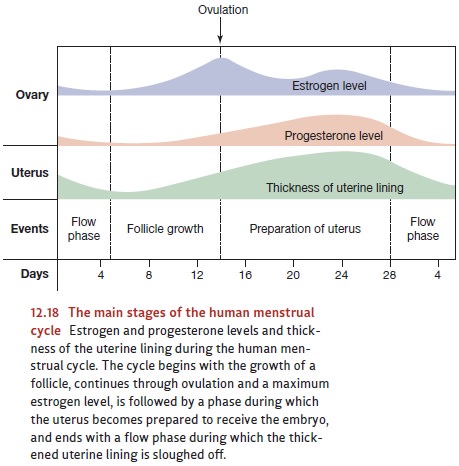 Release of the ovum triggers the second phase, during which the animal is in estrus. Estrogen production peaks and stimulates certain structures in the hypothalamus, which make the animal sexually receptive.

The ruptured follicle secretes another sex hormone, progesterone, which dominates the action of the third phase. Progesterone secretion leads to a thickening of the uterine lining, the first step in preparing the uterus to receive the embryo. If the ovum is fertilized, there are further steps in preparing the uterus. If it is not, the thickened uterine walls are reabsorbed, and another cycle begins. In humans and some primates, this thickening of the uterine wall involves too much extra tissue to be easily reab-sorbed; the thickened uterine lining is therefore sloughed off as menstrual flow.

These hormonal changes affect behavior dramatically. When female rats’ ovaries are removed, they soon lose all sexual interest and capacity, as do male rats when castrated. But sexual behavior is quickly restored in the male by appropriate injections of testos-terone and in the female mainly by estrogen (the female also needs, and secretes, a small amount of testosterone).

Many investigators believe that the behavioral effects of these hormones are medi-ated by receptors in the hypothalamus. This hypothesis has been tested by injecting tiny quantities of various hormones into different regions of the hypothalamus. Such studies reveal, for example, that a spayed female cat will go into estrus when estrogen is implanted (G. W. Harris & Michael, 1964) and that castrated males will resume sexual behavior after receiving doses of the appropriate male hormones (J. M. Davidson, 1969; Feder, 1984; McEwen et al., 1982).

Hormones affect behavior, but the effect can also work in the opposite direction. What an animal experiences and what it does can substantially affect it hormonally. In some animals, the female’s courtship behavior can trigger the release of testosterone in courting males. Conversely, the male’s behavior also influences female hormones. In many rodents, the female’s sexual receptivity is triggered by chemicals contained in the male’s urine. In other cases, copulation itself produces reproductive readiness for the female. For example, the female rat secretes some progesterone during the normal cycle but not enough to permit the implantation of the fertilized ovum in the uterus. The critical dose is secreted only as a reflex response to sexual stimulation. This leaves the sexually aroused male rat with two reproductive functions: supplying sperm and providing the mechanical stimulation necessary for the female’s hormonal secretion. Should he ejaculate too quickly and thus leave the female inadequately stimulated, all is lost, for no pregnancy results (Adler, 1979; Rosenzweig, Leiman, & Breedlove, 1996).

Compared to other animals, humans are less automatic in their sexual activities, more varied, and more affected by prior experience. This difference is especially marked when we consider the effects of sex hormones. In rats and cats, sexual behavior is highly dependent upon hormone levels; castrated males and spayed females stop copulating a few months after the removal of their gonads. In humans, on the other hand, sexual activity may persist for years, even decades, after castration or ovariectomy, provided that the operation was performed after puberty (Bermant & Davidson, 1974).

The liberation from hormonal control is especially clear in human females. The estrus cycle of the female rat or cat makes her receptive during only one period, but human females can respond sexually at virtually all points of their menstrual cycle. This does not mean, however, that human sexual desire is completely independent of hormonal influ-ence. If a man or woman has abnormally low hormone levels, injections of hormones will generally increase his or her sex drive (J. M. Davidson, 1986; Rosenzweig et al., 1996), and men, with their higher levels of testosterone than those of women, tend to have a stronger sexual drive than women have (Baumeister, Cantanese, & Vohs, 2001).

Hormonal influences are also evident in the fact that women’s preferences and behav-ior change as they move through their menstrual cycle. For example, women seem to prefer more “masculine” faces (with a slightly stronger chin and more prominent brows) if their preferences are assessed during the fertile phase of their cycle (Frost, 1994; Johnston, Hagel, Franklin, Fink, & Grammer, 2001; Penton-Voak & Perrett, 2000). In addition, some evidence suggests that women’s sexual desire increases during the middle of the cycle, when ovulation occurs. This effect is not very pronounced, however, and has not been observed in all studies, and thus it seems to be only the vestige of an estrus cycle, left behind by waves of evolutionary change (Adams, Gold, & Burt, 1978; Bancroft, 1986; Hamburg, Moos, & Yalom, 1968; Spitz, Gold, & Adams, 1975).

Our  understanding  of  the  human  sexual  response  cycle  has  its  foundation  in  the study of hundreds of men and women as they masturbated or had sexual intercourse in the laboratory (Masters & Johnson, 1966). Findings from these studies showed that people differed in many aspects of their sexual responses, but that four general stages seem to characterize both men’s and women’s sexual responses (Figure 12.19). 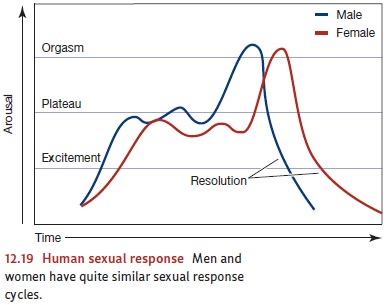 The first phase is the excitement  phase. In this phase, heart rate and blood pressure increase, breathing quickens, and there is increased muscle tension and blood flow to the sexual organs. For men, the penis becomes erect; for women, the clitoris becomes swollen and the vagina becomes lubricated. In the second or plateau  phase, heart rate, blood pressure, and muscle tension continue to rise, but more slowly, while muscles tighten at the base of the penis for men, and in the vagina for women. The third phase is the orgasm  phase. This  phase  is  characterized  by  heightened  arousal  and  a  series  of rhythmic  muscle  contractions  that  lead  to  ejaculation  of  sperm  in men, and to vaginal contractions in women that help to guide the sperm  up  the  vagina.  This  orgasm  phase  is  often  experienced  as intensely  pleasurable. The  fourth  and  final  phase  is  the  resolution phase, during  which  time  heart  rate  and  blood  pressure  drop  and muscles relax. For men, there is typically a refractory period during which another orgasm is not possible; the length of this refractory period varies from minutes to hours, and increases with age.