Physiological Aspects of Threat and Aggression

What physiological mechanisms underlie our reactions to threat? One crucial mecha-nism is the sympathetic branch of the autonomic nervous system.

Physiological Aspects of Threat and Aggression

What physiological mechanisms underlie our reactions to threat? One crucial mecha-nism is the sympathetic branch of the autonomic nervous system. This branch summons the body’s resources in times of crisis and gets the organism ready for vigorous action. We have mentioned some of the effects of sympathetic excitation, but in addition, this excitation stimulates the inner core of the adrenal gland, the adrenal medulla, to pour epinephrine (adrenaline) and norepinephrine into the bloodstream. These chemicals have effects similar to activation of the sympathetic nervous system— they accelerate the heart rate, speed up metabolism, and so on. As a result, they amplify sympathetic effects even further.

THE “ FIGHT OR FLIGHT ”RESPONSE

The physiologist Walter Cannon argued that intense sympathetic arousal serves as an emergency reaction that mobilizes the organism for a crisis—for “fight or flight,” as he described it. Consider a grazing zebra, placidly maintaining homeostasis by nibbling at the grass and vasodilating in the hot African sun. Suddenly it sees a lion closing in for the kill. Escape will require pronounced muscular exertion, with the support of the entire bodily machinery, and this is exactly what intense sympathetic activation pro-vides. Because of this activation, more nutrient fuel is available to the muscles and can be delivered rapidly through wide-open blood vessels. At the same time, waste products are jettisoned and all less-essential bodily activities are brought to a halt.

Cannon produced considerable evidence suggesting that a similar autonomic reac-tion occurs when an organism prepares to attack rather than flee. A cat about to tangle with a dog shows accelerated heartbeat, piloerection (its hair standing on end, normally a heat-conserving device), and pupillary dilation—all signs of sympathetic arousal that show the body is girding itself for violent muscular effort (Figure 12.11). 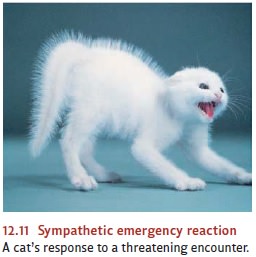 It turns out, however, that Cannon’s “fight or flight” formulation is overly simple, because organisms respond to threat in many different ways. While it is true that in some contexts, animals do indeed fight or flee, in other contexts, animals may stand immobile when threatened, so that predators are less likely to notice them. Other ani-mals have more exotic means of self-protection. For example, some species of fish pale when threatened, which makes them harder to spot against the sandy ocean bottom. This effect results from the direct action of adrenal epinephrine on various pigments in the animal’s skin (Odiorne, 1957).

A further complication for Cannon’s formulation comes from variations within aspecies. For example, Taylor and colleagues noted that most studies of the stressresponse had been conducted using male rats or humans (S. E. Taylor et al., 2000; S. E. Taylor, 2006). When researchers examined females’ responses, they found that their responses did not fit the “fight or flight” pattern of response. For example, women seemed to respond to stressful situations by “tending” (i.e., taking care of children) and “befriending” (i.e., using social support) (Figure 12.12). 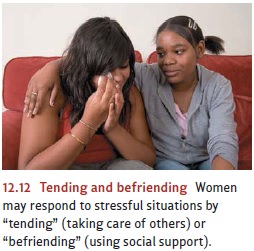 These limitations notwithstanding, the mechanism Cannon highlighted—an emer-gency system rooted in the sympathetic nervous system—is essential for many individ-uals in many species. At the same time, however, arousal of the sympathetic branch of the ANS can be disruptive and even damaging. This is especially clear in humans. In our day-to-day lives, we rarely encounter emergencies that call for violent physical effort, but our biological nature has not completely changed just because the modern world contains no threats from saber-toothed tigers. We are plagued instead by chronic stres-sors like traffic jams, ornery bosses, pressing deadlines, and agonizing world crises. Although we often feel impelled to defend ourselves against these threats of the mod-ern world, physical action is frequently inappropriate, ineffective, or illegal. Nonetheless, we are stuck with the same emergency reactions that our ancestors had, and so we keep ourselves armed physiologically against situations we cannot really con-trol. The resulting bodily wear and tear can take a serious toll (e.g., Sapolsky, 1998).

It seems, then, that our biological reaction to threat may not always serve us well in our modern environment. Nonetheless, this reaction is well rooted in our biology, and it is certainly similar to the reaction pattern easily observed in many other species. It is a reaction pattern that has been shaped by natural selection and that has, over each species’ history, contributed to survival by preparing the organism for whatever ener-getic activities it needs to escape the threat.

But what does the animal do once the emergency reaction is under way? Are the subsequent steps also shared across species? To answer this question, it is helpful to draw on the comparative method, studying nonhumans as well as humans to see what kinds of commonalities in our behavior reflect shared biological heritage.

As a first and crucial point, though, we need to distinguish two forms of violence that organisms engage in—aggression and predation. Predators hunt and kill for food, but they do so quite dispassionately. A predator about to pounce on its prey shows none of the signs of anger, and so a dog on the verge of catching a rabbit never growls, nor does it have its ears laid back (K. Z. Lorenz, 1966). Predatory attack is instead moti-vated by hunger, and it is controlled by the same brain sites as eating (Hutchinson & Renfrew, 1966). In contrast, aggressive or self-defense behaviors are controlled by dis-tinct brain areas, are triggered by different situations, and certainly show different behavioral profiles. In our discussion of aggression, therefore, it will be best to hold predatory attack to the side—as part of an animal’s food-gathering repertoire, and not part of its response to threat.

Genuine combat is, in fact, widespread among animals, and there is probably no species that has forsworn aggression altogether (Figure 12.13). Fish chase and nip each other; lizards lunge and push; birds attack with wing , beak, and claw; and on and on. In most cases, the individuals we identify as aggressive are male, because, among vertebrates, the male is by far the more physically aggressive sex. In some mammals, this sex difference in combativeness is apparent even in childhood play. Young male rhesus monkeys, for instance, engage in much more vigorous rough-and-tumble play than their sisters (Harlow, 1962). Among humans, boys worldwide are more physically aggressive than girls (Geary & Bjorklund, 2000), and as adults, male murderers outnumber females by a ratio of 10:1 (C. A. Anderson & Bushman, 2002). 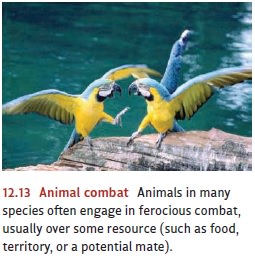 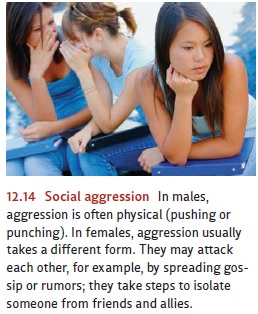 However, this gender difference holds only for physical aggression. Human females are also aggressive, but their aggression tends to rely on verbal or social assaults, not physical violence. Thus, females attack by means of insults or the spreading of rumors; they take steps to isolate someone from friends and allies (Figure 12.14). If we focus on these sorts of aggression, then it is women, not men, who are the aggressive sex (Oesterman et al., 1998).

Why is physical aggression so much more prevalent in men? Biological factors are clearly relevant, because aggression is partially influenced by hormones, particularly the sex hormone testosterone. High testosterone levels in the bloodstream are associated with increased physical aggressiveness in many different species, including fish, lizards, turtles, birds, rats, mice, and monkeys (D. E. Davis, 1964; A. Siegel & Demetrikopoulos, 1993). However, the relationship between testosterone and physical aggression is com-plex. As one complication, at least some human aggression bears no relationship to testos-terone levels, so it must be shaped by other factors (e.g., Book, Starzyk, & Qunisey, 2001). In addition, high testosterone levels can be both a cause and an effect of aggressive behav-ior. Thus, testosterone administered externally can increase subsequent aggressiveness, but successful aggressive encounters can also cause increased secretion of testosterone (Dabbs, 1992; Rosenzweig, Leiman, & Breedlove, 1996; Sapolsky, 1998).