Cultural and Cognitive Aspects of Threat and Aggression

In many cases, humans (just like other animals) become aggressive in an effort to secure or defend resources.

Cultural and Cognitive Aspects of Threat and Aggression

In many cases, humans (just like other animals) become aggressive in an effort to secure or defend resources. This is evident in the wars that have grown out of national disagreements about who owns a particular expanse of territory; on a smaller scale, it is evident when two drivers come to blows over a parking space. Humans also become aggressive for reasons that hinge on symbolic concerns, such as insults to honor or objections to another person’s beliefs or behavior. The latter type of aggression is clear in many of the hateful acts associated with stereotyping. It is also a powerful contribu-tor to the conflict among ethnic groups or people of different religions.

Whatever the source of the aggression, it is obvious that people vary enormously in how aggressive they are (Figure 12.15). Some of us respond to provocation with violence. Some turn the other cheek. Some find nonviolent means of asserting themselves. What determines how someone responds? 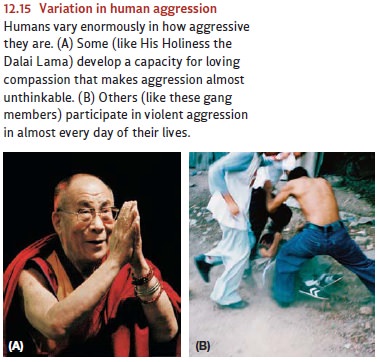 For many years, investigators believed that aggression was more likely in people with relatively low self-esteem, on the argument that such individuals were particularly vulnerable to insult and also likely to have few other means of responding. More recent work, however, suggests that the opposite is the case, that social provocations are more likely to inspire aggression if the person provoked has unrealistically high self-esteem (Baumeister, 2001; Bushman & Baumeister, 2002). Such a person is particularly likely to perceive the provocation as a grievous assault, challenging his inflated self-image; in many cases, violence will be the result.

Other personality traits are also relevant to aggression, including a factor called sensation seeking, a tendency to seek out varied and novel experiences in their daily lives. High levels of sensation seeking are associated with aggressiveness, and so are high scores on tests that measure the trait of impulsivity, a tendency to act without reflecting on one’s actions (Anderson & Bushman, 2002; Joireman, Anderson, & Strathman, 2003).

In addition, whether someone turns to aggression or not is influenced heavily by the culture in which he was raised. Some cultures explicitly eschew violence; this is true, for example, in communities of Quakers. But other cultures prescribe violence, often via rules of chivalry and honor that demand certain responses to certain insults. Gang violence in many U.S. cities can be understood partly in this way, as can some of the fighting among the warlords of Somalia. Cultural differences are also evident when we compare different regions within the United States; for example, the homicide rate in the South is reliably higher than in the North, and statistical evidence suggests that this contrast is best attributed to social differences and not to factors like population den-sity, economic conditions, or climate (Nisbett & Cohen, 1996).

How exactly does culture encourage or discourage aggression? The answer in some cases involves explicit teaching—when, for example, our parents tell us not to be aggressive, or they punish us for some aggressive act. In other cases, the learning involves picking up subtle cues that tell us, for example, whether our friends think that aggression is acceptable, or repugnant, or cool. In still other cases, the learning is of a different sort and involves what we called observational learning. This is learning in which the people around us model through their own actions how one should handle situations that might provoke aggression.

We noted, though, that observational learning can also proceed on a much larger scale, thanks to the societal influences that we are all exposed to. Consider the violence portrayed on television and in movies. On some accounts, prime-time tel-evision programs contain an average of five violent acts per hour, as characters punch, shoot, and sometimes murder each other (Figure 12.16). Overall, investigators estimate that the average American child observes more than 10,000 acts of TV violence every year (e.g., Anderson & Bushman, 2001). 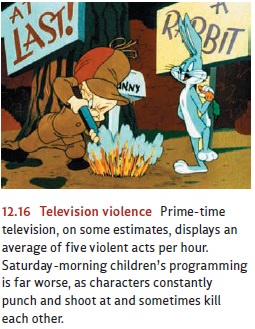 Evidence that this media violence promotes violence in the viewer comes from studies of violence levels within a community before and after television was introduced, or before and after the broadcast of particularly gruesome footage of murders or assassinations. These studies consistently show that assault and homicide rates increase after such expo-sures (Centerwall, 1989; Joy, Kimball, & Zabrack, 1986). Other studies indicate that chil-dren who are not particularly aggressive become more so after viewing TV violence (e.g., Huesmann, Lagerspetz, & Eron, 1984; Huesmann & Miller, 1994; for related data show-ing the effects of playing violent video games, see Carnagey & Anderson, 2005).

These studies leave little doubt that there is a strong correlation, such that those who view violence are more likely than other people to be violent themselves. But does this correlation reveal a cause-and-effect relationship, in which the viewing can actually cause someone to be more violent? Many investigators believe it can (Anderson & Bushman, 2001, 2002; Bushman & Anderson, 2009; Carnagey, Anderson, & Bartholow, 2007; Cassel & Bernstein, 2007). Indeed, the evidence persuaded six major professional societies (including the American Psychological Association, the American Medical Association, and the American Psychiatric Association) to issue a joint statement noting that studies “point overwhelmingly to a causal connec-tion between media violence and aggressive behavior in some children” (Joint Statement, 2000).

Whether motivated by a wish to defend a territory or a desire to repay an insult, aggres-sion is costly. If we focus just on the biological costs to the combatants, aggression is dangerous and can lead to injury or death. For some species, and for some forms of vio-lence, these costs are simply the price of certain advantages—for survival or for repro-duction (e.g., Pennisi, 2005). Even so, natural selection has consistently favored ways of limiting the damage done by aggression.

One way that natural selection seems to have done this is by ensuring that animals are keenly sensitive to the strength of their enemies. If the enemy seems much stronger (or more agile or better armed or armored) than oneself, the best bet is to concede defeat quickly, or better yet, never to start the battle at all. Animals therefore use a vari-ety of strategies to proclaim their strength, with a goal of winning the battle before it starts. They roar, they puff themselves up, and they offer all sorts of threats, all with the aim of appearing as powerful as they possibly can (Figure 12.17A). Conversely, once an animal determines that it is the weaker one and likely to lose a battle, it uses a variety of strategies for avoiding a bloody defeat, usually involving specific conciliatory signals, such as crouching or exposing one’s belly (Figure 12.17B). 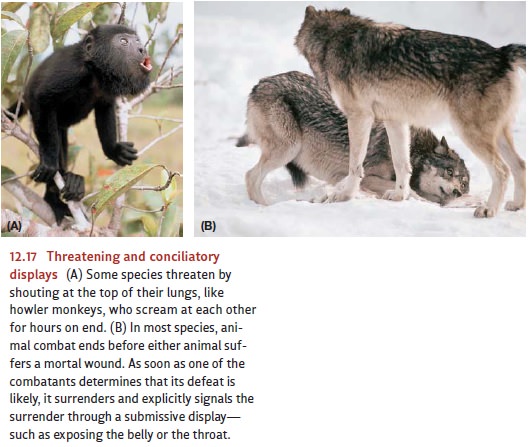 Similar mechanisms are evident in humans. For example, the participants in a bar fight or a schoolyard tussle try to puff themselves up to intimidate their opponents, just as a moose or a mouse would. Likewise, we humans have a range of conciliatory gestures we use to avoid combat—body postures and words of appeasement.

All of these mechanisms, however, apply largely to face-to-face combat; sad to say, these biologically based controls have little effect on the long-distance, large-scale aggression that our species often engages in. As a result, battles between nations will probably not be avoided by political leaders roaring or thumping their chests; soldiers operating a missile-launcher cannot see (much less respond to) their targets’ concilia-tory body posture. Our best hope for reducing human aggression, therefore, is that the human capacity for moral and intellectual reflection will pull us away from combat, and that considering the cruelty and destruction of violence will lead us to reconcile our differences by other means.