Physiological Aspects of Hunger and Eating

If animals are temporarily deprived of food, they usually eat more later, to return their bodies to the original weight.

Physiological Aspects of Hunger and Eating

If animals are temporarily deprived of food, they usually eat more later, to return their bodies to the original weight. If they are force-fed extra food, they later eat less. These observations suggest that the animals have a caloric or body-weight set point that they seek to maintain. In other words, animals do act as if they have an internal “appestat,” maintaining a relatively steady weight, just as the hypothalamus, acting as the body’s thermostat, maintains a relatively constant inner temperature.

Evidence for some sort of internal set point also comes from the fact that when food is freely available, animals usually eat just about the right amount to satisfy their needs, while keeping their weight roughly constant. The “right amount” here refers not to the volume of food, but to the number of calories in the food—and hence, the metabolic energy it can provide. This was demonstrated in a study many years ago in which researchers decreased the caloric levels of rats’ food by adding nonnutritive cellulose. The more diluted the food, the more the rats ate, in a quantity that kept their total caloric intake roughly constant (Adolph, 1947). Similar claims apply to humans, with the data indicating that each of us seems to have a target weight that our bodies work homeostatically to maintain. However, this set point is to some extent adjustable, and gradual changes in one’s weight appear to alter the weight that is defended (Levitsky, 2002; Pinel, Assanand, & Lehman, 2000; Ruderman, 1986).

Evidence for set points in humans comes from many sources, including the fact that crash dieters usually return to their starting weight soon after they go off their diets. Moreover, dieters do not lose nearly as much weight as we might expect based on their reduced caloric intake. This is probably because the body compensates for the caloric loss by reducing its metabolic rate (Guesbeck et al., 2001). In other words, when the body gets less food, it responds by burning fewer calories, defend-ing the set point weight. The consequence, of course, is that eating less does not lead to weight loss.

THE ROLE OF THE LIVER

What mechanisms maintain someone’s body weight at its set point? The answer involves a number of internal signals, including signals that reflect the availability of glucose (the sugar that serves as the body’s main fuel) in the blood.

Immediately after a meal, glucose is plentiful. Some is used right away, but much is converted to glycogen and various fatty acids, which are stored for later use. When this stored energy is needed, the process is reversed, and the glycogen and fatty acids are turned back into usable glucose. This conversion process is managed by the liver, and the liver keeps other organs informed about the direction in which the metabolic trans-action is going, from glucose to glycogen or vice versa. If the supply of glucose exceeds the body’s demand, so that the excess can be converted into glycogen and stored, the liver sends a satiety signal and the animal stops eating. If the body’s demand for glu-cose exceeds the supply, so that energy reserves are being used, the liver sends a hunger signal and the animal eats (M. I. Friedman & Stricker, 1976; Russek, 1971).

Notice, though, that this regulatory system must—like the thermoregulatory system—anticipate the animal’s needs. Imagine that the liver only signaled the animal to eat when glucose supplies were already low. Since it often takes time to locate food, eat it, and then digest it, hours might elapse between the moment at which the liver sends a “Need glucose!” signal and the time that the glucose finally arrives. Nutrient supplies would be exhausted, and the animal could die. It’s not surprising, therefore, that organisms have a well-defined mechanism for avoiding this catastrophe. When an organism has not eaten for a while, the level of glucose in the blood begins to drop. Before the level drops too far, the liver takes action, drawing some glycogen out of storage and converting it to glucose. As a result, the blood glucose level bounces back to normal. The result of this sequence of events is an easily identifiable pattern—a grad-ual drop in blood glucose, usually lasting many minutes, followed by a quick rise, result-ing from the liver’s compensatory action.

This slow-drop/quick-rise pattern means that the organism is drawing on its reserves, which signals the need for more glucose. When this blood glucose pattern occurs in rats, the animals start to eat (Campfield & Smith, 1990a, b). When it occurs in humans, they say they are hungry (Campfield & Rosenbaum, 1992).

OTHER CONTROL SIGNALS FOR FEEDING

The liver is only one part of the body’s system for regulating food intake. The hypothal-amus also contains cells that are sensitive to glucose levels in the blood, and if these glucoreceptors are damaged or disrupted, the result is ravenous eating (Miselis &Epstein, 1970).

Other signals come from other parts of the body. The stomach walls, for example, con-tain receptors sensitive to the nutrients dissolved in the digestive juices. When these receptors signal to the brain that nutrient supplies are on the way, the organism stops eating (Deutsch, Puerto, & Wang, 1978). Still other signals come from the fatty tissues themselves. To understand the importance of these signals, bear in mind that animals don’t eat just for the moment. After all, they can’t be sure that food will be available the next time they need energy, and so they must eat enough both to satisfy their current needs and to store nutrients for later. This long-term store is provided by the fat, or adi-pose cells, distributed throughout their body. These cells absorb the fatty acids created by the liver and swell in the process. The longer-term reserves then stand ready in case the animal’s glycogen supplies are exhausted. If this happens, fatty acids drain from the adipose cells into the bloodstream and are converted into glucose. Adipose tissue used to be regarded only as a kind of inert storage, 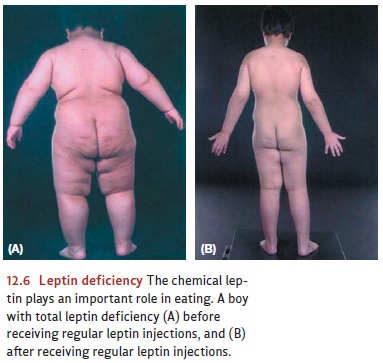 but we now know that it plays a major role in governing hunger. Fat cells, when full, secrete the chemical leptin into the bloodstream, where it is sensed by receptors in several places in the brain, includ-ing the hypothalamus (Bouret, Draper, & Simerly, 2004; Maffei et al., 1995; McGregor et al., 1996; Pinto et al., 2004). Leptin seems to signal that there is plenty of fat in storage and no need to add more, and it may be one of the most important factors in governing an organism’s food intake over the long term (Figure 12.6). Leptin appears to work by inhibiting the actions of several other neuro-chemicals, such as neuropeptide Y (NPY), manufactured in the hypothalamus and the gut. NPY itself turns out to be a powerful appetite stimulant (Gibbs, 1996; B. G. Stanley, Magdalin, &Leibowitz, 1989), so leptin secretion from fat cells seems to provide the negative feed-back that holds NPY levels in check. 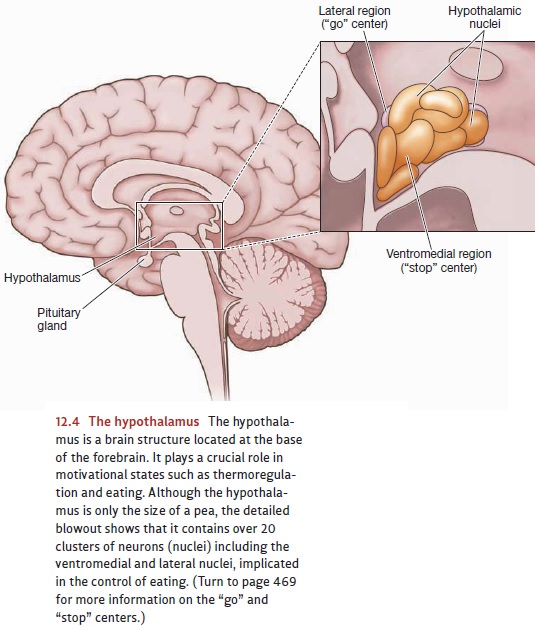 Consistent with this claim, damage to the lateral region of the hypothalamus seems to disrupt the initiation of feeding. If this region is lesioned, animals do not eat and will starve to death unless force-fed. Conversely, damage to the ventromedial region dis-rupts circuits that would ordinarily tell the animal when to stop feeding. Surgically induced lesions here cause rats to eat voraciously, until they finally reach a weight three times as great as before surgery (Figure 12.7). In humans, tumors in this hypothalamic region have the same effect—leading to extreme obesity (Hoebel & Teitelbaum, 1976; N. E. Miller, Bailey, & Stevenson, 1950; Teitelbaum & Epstein, 1962). 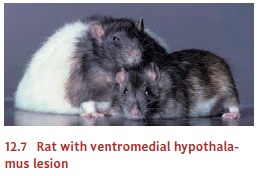 Subsequent research has shown, however, that the mechanisms described in this theory are only part of the story of how feeding is controlled. For example, lesions of the ventromedial hypothalamus (the supposed “stop” center) have been found not just to increase appetite (because the “stop” center is no longer functioning), but also to increase the rate of fat storage (Stricker & Zigmond, 1976). In addition, the lateral hypothalamus appears to be only one of the “go” centers for feeding. This is indicated by the fact that the appetite stimulant NPY exerts its strongest effects outside the lateral hypothalamus (Leibowitz, 1991). These and other results indicate that even though the hypothalamus is critical for the control of eating, other mechanisms are also crucial, some specialized for short-term energy needs, others for long-term storage.

WHY SO MANY SIGNALS ?

We have acknowledged a broad set of signals controlling when an organism starts eating and when it stops, signals from the liver and from glucoreceptors in the brain, signals from the stomach and from the adipose tissue. In truth, other signals should be added to this list, including, of course, the sensory qualities of the food itself. Thus, when we see a delicious-looking pastry or smell hot, fresh popcorn, these sen-sory cues can make us feel hungry and cause us to eat even if we are experiencing no caloric need.

Why do we need so many cues? Part of the answer lies in the safety provided by backup systems—so that if one system fails, the organism can still self-regulate. And part of the answer is that different signals monitor different aspects of our nutritional needs—some (such as leptin) keeping tabs on our longer-term needs, and others (like cues from the stomach) signaling our more immediate status and allowing us to deal with hour-by-hour variations in our energy requirements.

The various cues also play different roles within the overall control of feeding. Some cues, like the sensory information from the food itself, directly signal the avail-ability of food in the environment. Other, less direct cues play their main role in creating a motivational state for the organism so that, broadly put, these cues lead the organism to feel hungry so it is motivated to seek food. Finally, some cues potentiate other cues—that is, they make the other cues more salient and more persuasive. In one study, for example, researchers recorded activity levels in cells in a waking mon-key’s hypothalamus (Mora, Rolls, & Burton, 1976; also Rolls, 1978). Those cells were activated when the animal was shown a peanut or banana, but only when the animal was hungry. In this fashion, the cues reflecting the animal’s internal state did not directly influence its behavior. Instead, these cues potentiated the sensory cues, so that the animal would be more likely to detect (and respond to) the immediate avail-ability of food when it needed nutrients.