The Diversity of Motives

Maslow and the Hierarchy of Needs • The Twin Masters: Pain and Pleasure

THE DIVERSITY OF MOTIVES

Some of the wide range of motives we have discussed are well described in drive terms. Other motives seem to have both a prominent avoidance (drive-reduction) component and an approach component. As this list of motives grows, however, one pressing ques-tion is how to organize the many motives that energize and direct our behavior.

Maslow and the Hierarchy of Needs

One approach was suggested by Maslow, who described a hierarchy of needs in which the lower-order physiological needs are at the bottom of the hierarchy, safety needs are further up, the need for belonging is still higher, and the desire for esteem is  higher  yet. Higher  still, toward  the  top  of  the  hierarchy, is  the  striving  for  self- actualization—the desire to realize oneself to the fullest (Figure 12.25). 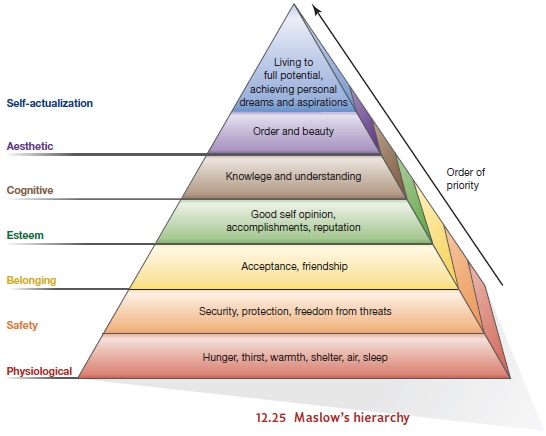 Maslow believed that people will strive for higher-order needs (e.g., self-esteem or artis- tic achievement) only when lower-order needs (e.g., hunger) are satisfied. By and large this is plausible enough; the urge to write poetry gen- erally takes a back seat if one has not eaten for days.  But  as  Maslow  pointed  out,  there  are exceptions.  Some  artists  starve  rather  than give  up  their  poetry  or  their  painting,  and some  martyrs  proclaim  their  faith  regardless of  pain  or  suffering.  But  to  the  extent  that Maslow’s  assumption  holds, a  motive  toward the  top  of  his  hierarchy—such  as  the  drive toward  self-actualization—will  become  pri- mary only when all other needs beneath it are satisfied.

The Twin Masters: Pain and Pleasure

A second approach to organizing our many motives, rather than listing them hierarchi-cally as Maslow did, is to dig deeper and look for a few common principles that under-lie our diverse motives. This approach leads us to consider the twin masters of pain and pleasure which may be said to govern much of our behavior.

THE AVOIDANCE OF PAIN

What do being too hot (or cold), being famished, being frightened, and being sexually frustrated have in common? We sometimes speak of each as involving its own type of pain, although this usage of the word might seem metaphorical. After all, in discussing a specific sensation typically associated with tissue injury or irritation. It turns out, though, that there is no metaphor here, and various states of discomfort do involve mechanisms overlapping with those associated with, say, stepping on a nail or bumping your head.

As we saw, pain is a “general purpose” signal that all is not well. There are multiple pain pathways, including a fast pain pathway that detects localized pain and relays this information quickly via the thalamus to the cortex using thick, myelinated fibers, as well as a slow pain pathway that carries less localized sensations of burning or aching via the thalamus to subcortical brain structures such as the amygdala using thinner unmyelinated fibers. These pathways differ in important ways, but they both carry information that allows us to distinguish different types of painful stimulation, and an awareness of these differences is important, because this is what allows us to know what steps to take to decrease the pain we are feeling.

At the same time, researchers are beginning to appreciate that many different types of stimulation activate a common brain network, referred to as the pain matrix. The pain matrix consists of a distributed set of regions including the thalamus and the anterior cingulate cortex. The physical pain of accidentally touching a hot stove acti-vates this matrix, but so does the psychological pain that comes with being socially snubbed, and this is what tells us that these various forms of discomfort really do have elements in common—both functionally and neurally. Figure 12.26 shows the similar brain activations associated with thermal stimulation (Panel A) as well as social exclu-sion (Panel B). 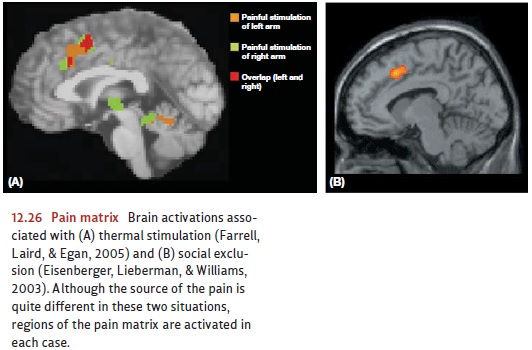 What’s important here is to appreciate that pain in all of its forms has both a specific and a general motivational role. Some pain signals provide specific information about what is happening (there’s a burning sensation in my right hand) and motivate a specific response (I need to move my hand away from the stove). Other pain signals alert us to different, broader kinds of problems, and suggest different types of responses, such as a departure from a socially awkward situation.

This overlap among very different types of “pain” is important for another reason. It provides a “common currency” in which to express a wide range of undesirable states. The function of this common currency becomes clear when we realize that many motives typically operate at a time, ranging from tight shoes to thirst to fatigue. In such settings, the generic aspect of pain allows us to decide which of these quite different states to attend to now and which can be handled later.

THE  PURSUIT OF PLEASURE

Efforts to avoid or reduce painful states of tension govern many of our behaviors. However, as Maslow pointed out, reducing these states is not our only motive. We also have positive goals, and seek out pleasurable states.

Historically, research on incentives has focused on external determinants of behavior— the specific rewards available to us and their influence on our behavior. It is becoming clear, however, that internal states of pleasure have a role in supporting incentives that parallels the role of the internal states of pain in supporting drives. This realization has directed researchers’ attention to examining two different aspects of our responses to rewarding stimuli, namely, wanting and liking.

Wanting refers to the organism’s motivation to obtain a reward and is measured bythe amount of effort the organism will exert to obtain it. Because wanting is defined behaviorally, it can be assessed in any organism whose behavior we can measure. With rats, we can ask how many times they will press the bar to dispense a food pellet. In a similar fashion, we can see how hard people will work to obtain a reward: If you want brownies, do you want them badly enough to go through the trouble of making them? And if you don’t have the ingredients, do you want brownies badly enough to first go shopping and then make them?

In contrast to wanting, liking refers to the pleasure that follows receiving the reward, like the pleasure deriving from the luscious taste of the warm brownies. We all know the sensation of liking, but unlike wanting, liking is difficult to define behaviorally. However, we can explore the neural basis of this experience. Research on this point dates back more than half a century to work by Olds and Milner, who electrically stimulated rats’ brains in different regions. They found that stimulation in some regions led rats to engage in behaviors such as returning repeatedly to the location at which they were ini-tially stimulated, seemingly in an attempt to repeat the stimulation. To understand this phenomenon, Olds and Milner made the brain stimulation contingent upon bar presses, and found that rats would bar press at very high rates for long periods of time, and to the exclusion of other activities, in order to obtain this stimulation (Figure 12.27). One par-ticularly important spot for this effect—in rats and humans—appears to be the medial forebrain bundle, a nerve tract consisting of neurons with cell bodies in the midbrain which synapse in the nucleus accumbens (in the striatum). 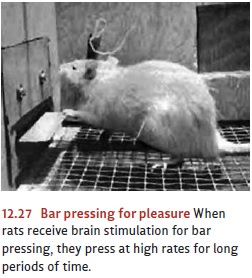 Apparently, stimulation in this brain area is strongly rewarding—but why? Is this area involved in wanting or in liking? Modern neuroimaging research suggests an answer, and indicates that different brain regions are engaged by reward anticipation (wanting) and reward delivery (liking) (Schultz, Tremblay, & Hollerman, 2000). In particular, regions in the frontal cortex are activated by liking, whereas the nucleus accumbens is especially sensitive to wanting. In one of the first studies to demonstrate this dissociation in humans, Knutson and colleagues used fMRI during a task in which participants were shown various types of cues and were asked to respond to a target (Knutson, Fong, Adams, Varner, & Hommer, 2001). If participants responded quickly enough, they were able to win one dollar, and target presentation was adjusted for each individual so that each participant succeeded approximately two-thirds of the time. As shown in Figure 12.28, the period of anticipation and wanting was associated with greater activation in the nucleus accumbens, whereas the period of liking the reward was associated with activation in the frontal cortex. These activation patterns suggest that the processes of wanting and liking have separate bases in the brain.

Additional evidence that wanting and liking depend on separable brain systems comes from studies of the neurotransmitters that underlie reward processing. When 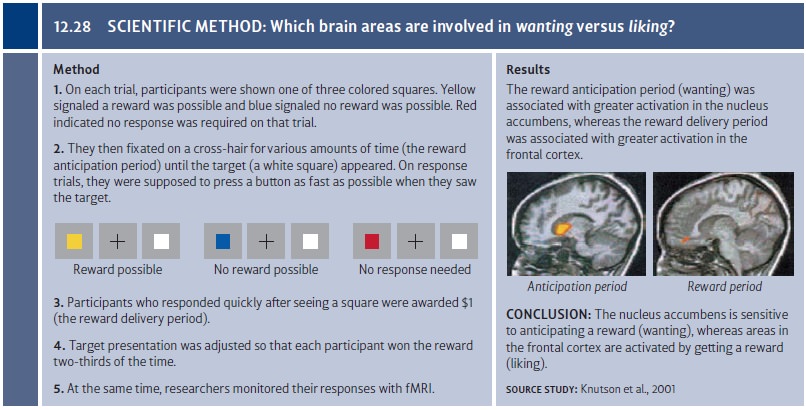 animals are trained to bar press for a reward, their neurons release dopamine into the nucleus accumbens neurons during anticipation but not during receipt of reward (Phillips et al., 2003). When dopamine antagonists are introduced, which interfere with the effects of dopamine, the animals will continue to engage in incentive-driven behavior for a time, but they will not work to receive rewards that are not present (Berridge & Robinson, 2003). These and other findings suggest that dopamine release plays a central role in wanting. Complementary studies have examined the neurotrans-mitters that are responsible for liking. These studies suggest that endorphins are released into the nucleus accumbens when rewards are delivered. When endorphin antagonists are administered (in humans), these appear to diminish the subjective pleasure associated with consuming the rewards (Yeomans & Gray, 1996).