Questions about why we act in a certain way, or why we feel as we do, can be answered in various ways.

Questions about why we act in a certain way, or why we feel as we do, can be answered in various ways. Some answers emphasize what we referred as ultimate causes, including the powerful influence, over thousands and thousands of years, of natural selection. This reflects the key fact that, as we saw in that earlier, evo-lutionary forces have shaped not only our physical features but also our psychological features.

Other answers about why we act or feel as we do focus on causes that are specific to the individual, but are nonetheless fairly remote from the present situation. For exam-ple, why do some people prefer to take psychology courses, while others prefer astro-physics? Here, the cause may be rooted in the person’s childhood. Perhaps the person happened to experience unusual events, and this triggered a lifelong interest in human behavior and mental processes. Or perhaps the person is seeking to distance herself from her parents, and her parents have always been skeptical about psychology. In either case, these decades-past circumstances are now shaping the person’s behavior.

Important as these remote causes are, they do not tell us everything we need to know. After all, we do not eat because we think, “Natural selection requires that I eat.” Likewise, we usually do not choose courses by reasoning through “Will this selection help me to be different from my mother?” We need to ask, therefore, what the bridge is between remote causes, on the one side, and actual behaviors, on the other. What are the more immediate causes of our behavior?

The answer to this question can take many forms, because, quite simply, we are moti-vated by different forces in different circumstances. Early theorists emphasized the bio-logical roots of our motivation, describing our diverse motivational states as all arising from genetically endowed instincts. Early theorists such as William James (1890) thought humans were impelled by innate motives that were activated by features of the environment, much as spiders spin webs and birds build nests (Figure 12.1). Following James’s lead, early psychologists drew up lists of instincts that they believed governed human behavior. Thus, for example, William McDougal (1923) asserted that humans have 13 instincts, including parenting, food seeking, repulsion, curiosity, and gregari-ousness (i.e., a tendency to seek out social contact). 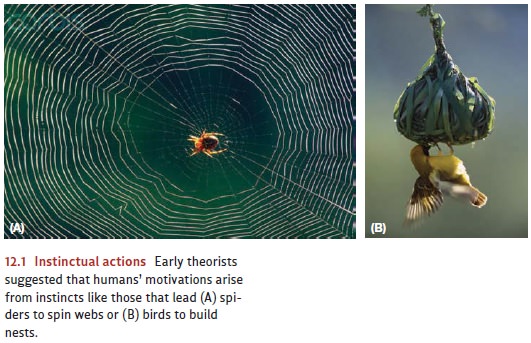 Unfortunately, different theorists came up with quite different lists of instincts, and in 1924, sociologist Luther Bernard counted over 5,000 instincts that had been proposed by one scholar or another. This meant that instinct theory was—at best— inelegant, but, worse, commentators increasingly wondered what work the theory was actually doing. What did it mean to “explain” the impulse to parent one’s children by postulating a “parenting instinct”? We could, on this model, “explain” why people vote by asserting that there is a “self-governance instinct,” and explain why they go shop-ping by asserting a “shopping instinct.” In each case, our “explanation” merely provides a new bit of jargon that offers us no new information.

A different conception of motivation turns out to be more productive. More than a century ago, the French physiologist Claude Bernard (1813–1878) noted that every organism has both an external environment and an internal one. The external environment includes the other creatures that the organism interacts with, and also the organism’s physical surrounding—the temperature, the topography, the avail-ability of shelter and water, and so on. But the organism’s internal environment is just as important, and includes the concentrations of various salts in the body’s flu-ids, the dissolved oxygen levels and pH, and the quantities of nutrients like glucose, the sugar that most organisms use as their body’s main fuel.

Moreover, Bernard noted that even with large-scale fluctuations in the outside environment, there is a striking constancy in the organism’s internal state. All of the internal conditions we just listed fluctuate only within narrow limits, and, indeed, they must stay within these limits, because otherwise the organism is at severe risk. Apparently, therefore, the organism is capable of making substantial changes in order to compensate for the variations it encounters in the world.

The maintenance of this internal equilibrium involves a process known as homeostasis (Figure 12.2). Homeostasis involves many mechanisms, including inter-nal adjustments (e.g., mechanisms in the kidneys that control the concentration of sodium in the bloodstream), and also a diverse set of behaviors (e.g., eating when you are low on calories, seeking shelter when you are cold), and this returns us to our discussion of motives. Deviations from homeostasis can create an internal state of bio-logical and psychological tension called a drive—a drive to eat, a drive to sleep, and so on. The resulting behavior then reduces the drive and thus returns us to equilibrium. 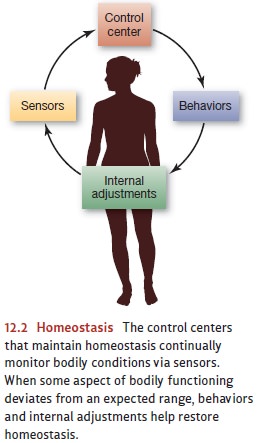 Drive-reduction allows us to explain many of our motivated behaviors—including behaviors essential for our survival. As we will see later, though, some behaviors cannot be explained in this fashion, and so we will need a broader concep-tion of motivation before we are through. Even so, drive-reduction plays a central role in governing the behavior of humans and many other species.