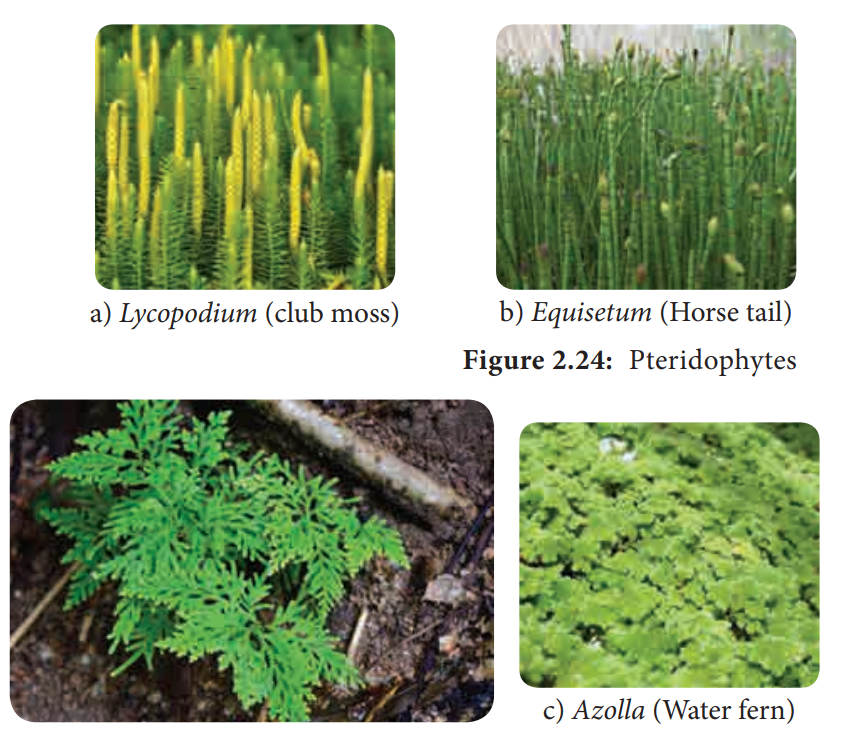 Pteridophytes are the vascular cryptogams and were abundant in the Devonian period of Palaeozoic era (400 million years ago).

From the previous chapter we are aware of the salient features of amphibious plants called Bryophytes. But there is a plant group called Pteridophytes which are considered as first true land plants. Further, they were the first plants to acquire vascular tissue namely xylem and phloem, hence called vascular cryptogams. Club moss, Horsetails, quill worts, water ferns and Tree ferns belong to this group. This chapter deals with the characteristic features of Pteridophytes. 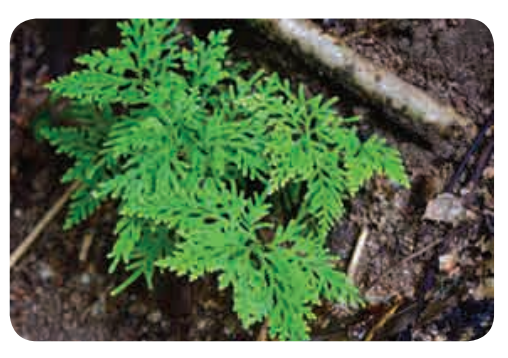 Pteridophytes are the vascular cryptogams and were abundant in the Devonian period of Palaeozoic era (400 million years ago). These plants are mostly small, herbaceous and grow well in moist, cool and shady places where water is available. The photographs for some pteridophytes are given in Figure 2.24.

•            Stele is protostele but in some forms siphonostele is present (Marsilea)

•            Tracheids are the major water conducting elements but in Selaginella vessels are found.

•            Sexual reproduction is Oogamous. Sex organs, namely antheridium and archegonium are produced on the prothallus.

• Water is essential for fertilization.

After fertilization a diploid zygote is formed and undergoes mitotic division to form embryo.

48 families in the classification.

The Economic importance of Pteridophyte is given in Table 2.4 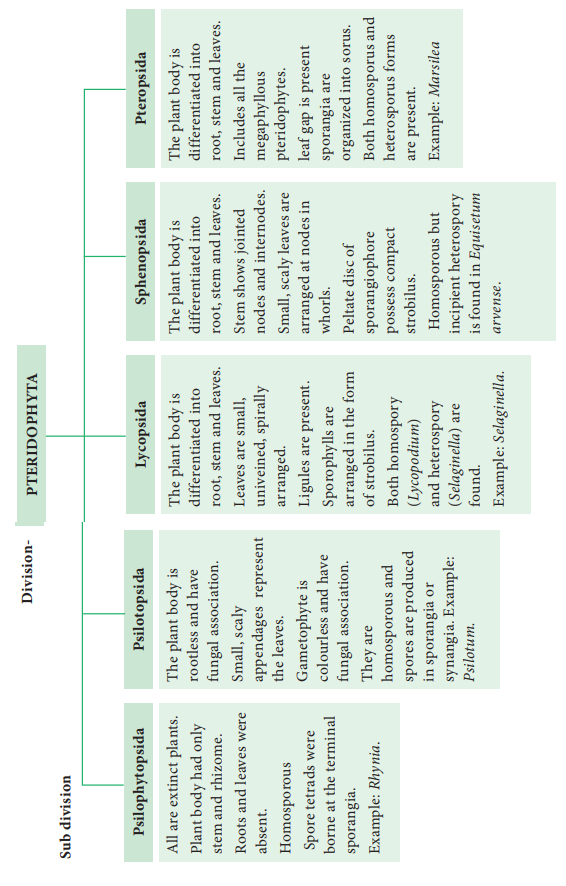 Selaginella is commonly called ‘spike moss’. They are distributed in humid temperate and tropical rain forests. Selaginella rupestris and Selaginella lepidophylla are Xerophytic.

Selaginella kraussiana, Selaginella chrysocaulos, Selaginella megaphylla are some common species. In few Selaginella species during dry season the entire plant body gets curled and become fresh, green when moisture is available. Due to this they are called Resurrection plants. Example S. lepidophylla

The plant body of Selaginella is sporophyte (2n) and it is differentiated into root, stem, and leaves (Figure 2.25). There exist variations in the habit of Selaginella. Some species possess prostrate creeping system (S. kraussiana); suberect (S. rupestris); erect (Selaginella erythropus); Climbing (Selaginella alligans). S. oregana is an epiphyte. Most of the species are perennials. on the basis of structure of stem and arrangement of leaves, Selaginella is divided into two sub genera namely Homoeophyllum and Heterophyllum. 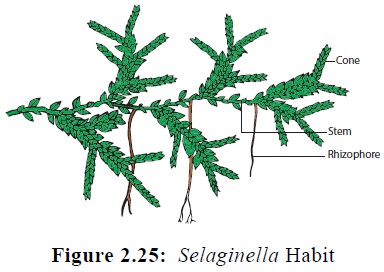 Primary roots are short lived and the adult plant has adventitious roots. The root may arise at the point of dichotomous branching or knot like swelling present at the basal portion of the stem. Roots are endogenous in origin.

In many species long, cylindrical, unbranched and leafless structures arise from the lower side of the stem at the point of dichotomy called rhizophores. They grow vertically downwards and produce tufts of adventitious roots.

The stem may be erect, dichotomously branched or prostrate with lateral branching. The prostrate stem is dorsiventral.

The leaves are microphyllous, sessile and simple. A single midvein is present in the leaves. The vegetative leaf as well as the sporophyll bears a small membranous tongue like structure on adaxial surface called ligule. The basal part of the ligule possess a hemispherical mass of thin walled cells called glossopodium. The function of ligule is not known, but it is viewed to be associated with water absorption, secretion and prevent dessication of shoot. The members belonging to Homeophyllum type possess same type of leaves spirally arranged on the stem whereas the Heterophyllum type have two types of leaves- two dorsal rows of small leaves(Microphylls) and two ventral rows of large leaves(Megaphylls).

The transverse section of the root reveals an outermost layer called epidermis. It is made up of tangentially elongated cells. The cortex is homogeneous made up of thin walled parenchyma . The innermost layer of cortex is called endodermis. The stele is a protostele, monarch and xylem is exarch (Figure 2.26). 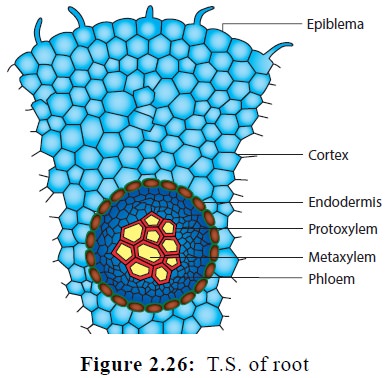 The outermost layer of Rhizophore is the epidermis. It is single layered and is covered with a thick cuticle. The cortex is differentiated into outer scelrenchymatous and inner parenchymatous layers.

The innermost layer of cortex forms endodermis. The stele is a protostele Figure 2.27. It is monarch and exarch but it is centrifugal in S. kraussiana and crescent shaped in S. atroviridis. 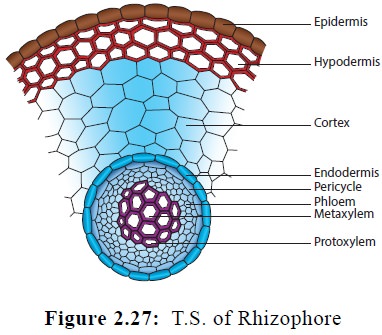 The anatomy of the stem reveals the presence of epidermis, cortex and stelar region (Figure 2.28). 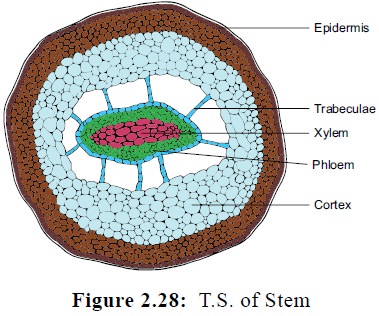 The epidermis is parenchymatous and is covered with a thick cuticle. The cortex is parenchymatous with cells arranged without intercellular spaces. A sclerenchymatous hypodermis is noticed in Selaginella lepidophylla. The presence of radially elongated endodermal cell s called trabeculae is the characteristic feature of Selaginella. The casparian strips are found on the lateral walls. The rapid stretching of the innermost cortical cells in comparison with stele results in air spaces and stele appears to be suspended in air space with the help of trabeculae. The stele is a protostele and exarch. A variation in number of steles is found. It may be monostelic (S. spinulosa); distelic (S. kraussiana )or polystelic (S. laevigata). The xylem is monarch(S. kraussiana) or diarch (S. oregana) . Tracheids are present but vessels are also noticed in S. densa and S. rupestris.

The leaf shows upper and lower epidermis. The epidermal cells have chloroplast. Stomata occur on both surfaces. The mesophyll is made up of loosely arranged thin walled cells with intercellular spaces. There is a median vascular bundle surrounded by a bundle sheath. In vascular bundle xylem is surrounded by phloem.

Selaginella shows both vegetative and asexual modes of reproduction.

During sexual reproduction spores are produced (Figure 2.29). Selaginella is heterosporous and produces two types of spores namely microspores in microsporangium and megaspores in megasporangium. 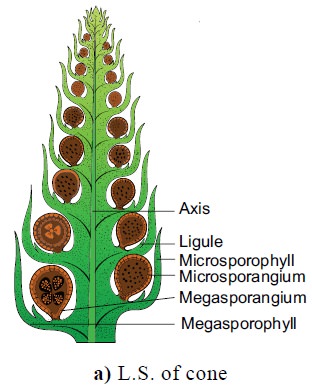 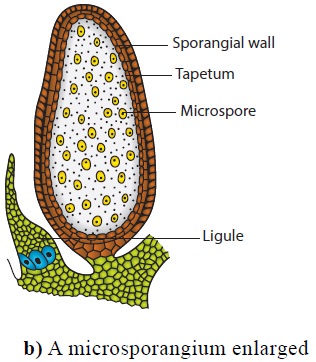 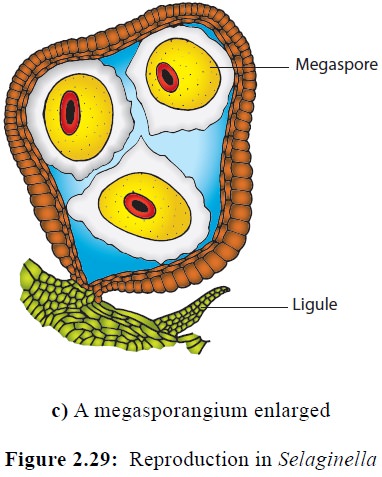 The development of sporangium is of eusporangiate type. The sporangial initial divides periclinally to form outer jacket initials and inner archesporial initials. The archesporial initials by repeated anticlinal and periclinal divisions form sporogenous cells. Microspore mother cells of microsporangiumundergoreductiondivision to produce halpoid microspores. Similarly the megaspore mother cell undergoes reduction division to produce 4 haploid megaspores. The microspore and megaspore represent the male and female gametophyte and germinate inside the sporangium. The microspores

produce biflagellate antherozoids. Archegonia develop in the megaspore. The antherozoids swim in water and reach the archegonium. Fertilization brings the fusion of male and female nucleus which result in the formation of a diploid zygote. The diploid zygote represents the first cell of sporophyte. 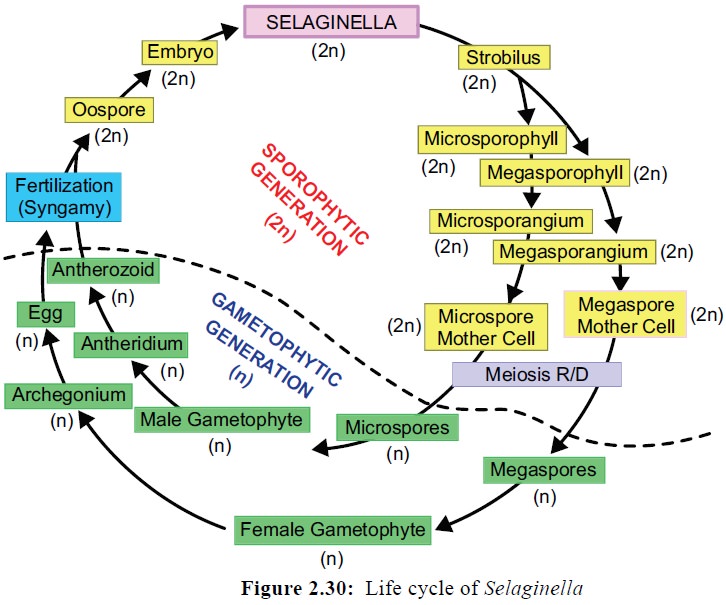 It undergoes several mitotic division to form embryo. The embryo develops into a mature sporophytic plant.

In the life cycle of Selaginella alternation of sporophytic and gametophytic generation is present (Figure 2.30).

Adiantum is commonly known as ‘Maiden hair fern’ or ‘Walking fern’. They are distributed in the tropical and temperate regions of the world. Some of the Indian species include Adiantum capillus-veneris, Adiantum pedatum, Adiantum caudatum and Adiantum venustum. The sporophyte is differentiated into rhizome, roots and leaves Figure 2.31. 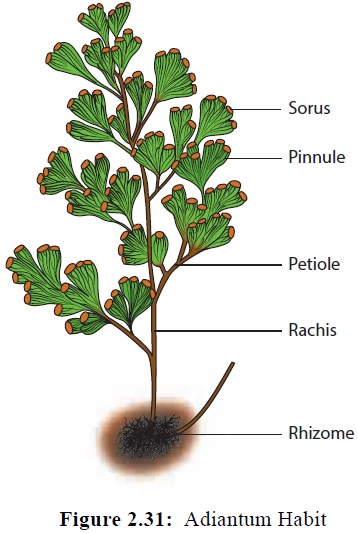 The rhizome is a perennial, subterranean dichotomously branched structure and is creeping in A. capillus-veneris or may be erect as in A. caudatum. It is covered with persistent leaf bases and hairy outgrowths called ramenta.

The roots are adventitious and arise from the rhizome.

The leaves are also called fronds and are pinnately compound (unipinnate- A. caudatum, bipinnate- A. capillus- veneris) the young leaves are circinately coiled. The petiole is long, black and shiny. The venation is free and dichotomous in all the species. The vein spread in a fan-like manner in the lamina. The leaves bear marginal sori which are covered by a false indusium.

The root is differentiated into epidermis, cortex and central vascular cylinder. 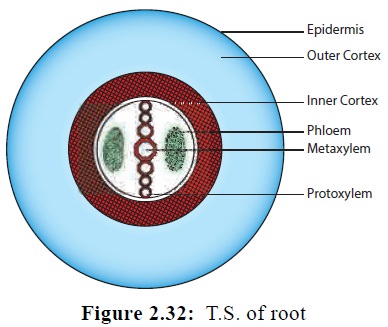 The epidermis is the outermost layer and bears unicellular root hairs. The cortex is divided into outer wide parenchymatous and inner narrow sclerenchymatous layer. The stele is simple and possesses a central core of xylem in diarch condition with phloem on either side of it (Figure 2.32).

The rhizome in transverse section shows a single layered epidermis covered by cuticle. Some epidermal cells bear multicellular hairs. The Epidermis is followed by two to three layered hypodermis made up of sclerenchyma tissue. A parenchymatous ground tissue is present. The young rhizomes have amphiphloic siphonostele. The older rhizomes have solenostele or dictyostele (Figure 2.33). 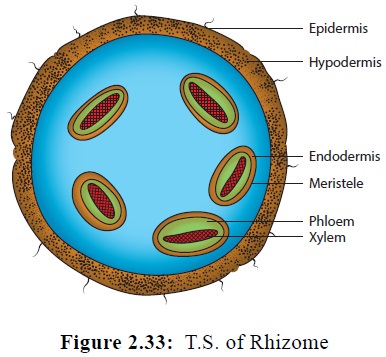 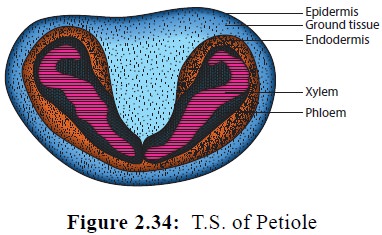 Adiantum is homosporous. The reproduction takes place by the production of spores. The spores are produced in sporangia. A group of sporangia forms sori. The sori are marginal but the reflex margins of the pinna form a protective membranous structure called false indusium (Figure 2.35). The development of sporangium is of leptosporangiate type. 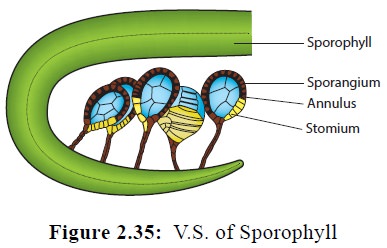 The sorus does not show any definite sequence hence fall under mixed type.

A mature sporangium bears a multicellular stalk and a spherical or elliptical single layered structure called capsule. The capsule contains haploid spores. The wall of the capsule is differentiated into thick walled annulus and thin walled stomium. On maturity the sporangium bursts and spores are released. The spores germinate and undergo repeated division to produce a prothallus. The prothallus is flat, green and heart shaped. It is monoecious and represents the gametophytic phase. Sex organs called antheridia and archegonia develop on the prothallus. Antheridia release multiflagellate antherozoids which swim in water and reach the egg of the 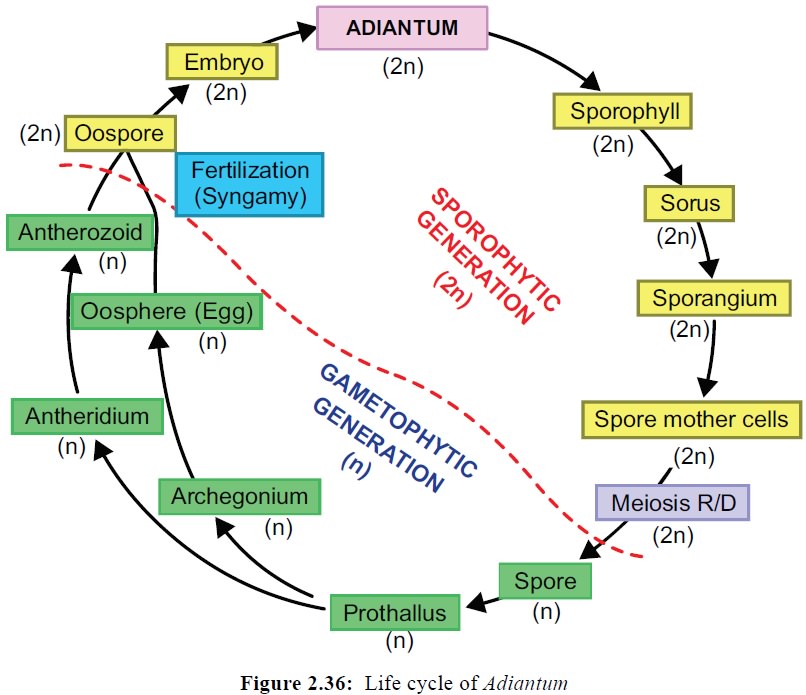 archegonium to accomplish fertilization. The fertilization results in zygote(2n) and it represents the first cell of sporophytic generation. The zygote develops into embryo which further differentiates into sporophyte. Thus Adiantum shows alternation of generation (Figure 2.36).

The term stele refers to the central cylinder of vascular tissues consisting of xylem, phloem, pericycle and sometimes medullary rays with pith (Figure 2.37). 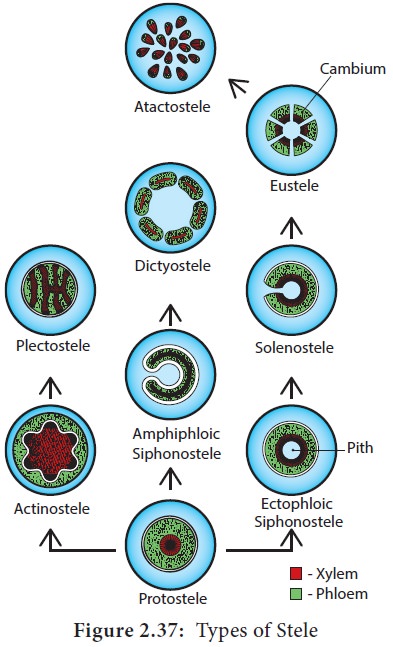 There are two types of steles

(i)       Haplostele: Xylem surrounded by phloem is known as haplostele. Example: Selaginella.

(i)       Ectophloic siphonostele: The phloem is restricted only on the external side of the xylem. Pith is in centre. Example: Osmunda­.

(ii)    Amphiphloic siphonostele: The phloem is present on both the sides of xylem. The pith is in the centre. Example: Marsilea.

(iii)  Solenostele: The stele is perforated at a place or places corresponding the origin of the leaf trace.

(a) Ectophloic solenostele – Pith is in the centre and the xylem is surrounded by phloem Example Osmunda.

(b)    Amphiphloic solenostele – Pith is in the centre and the phloem is present on both sides of the xylem. Example: Adiantum­ pedatum.

(c)    Dictyostele – The stele is separated into several vascular strands and each one is called meristele. Example: ­Adiantum capillus-veneris.

(v)    Atactostele: The stele is split into distinct collateral vascular bundles and are scattered in the ground tissue Example: Monocot stem.

(vi)  Polycyclicstele: The vascular tissues are present in the form of two or more concentric cylinders. Example: Pteridium.