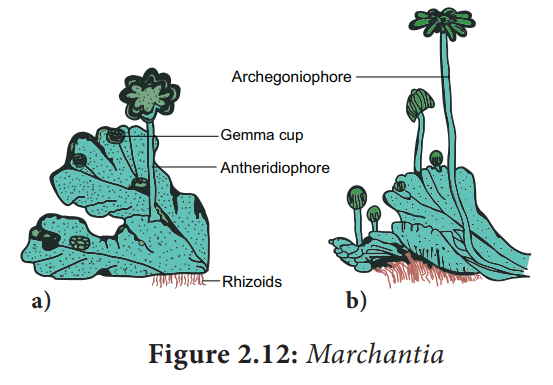 The plant body of Marchantia is a gametophyte. It is prostrate,dorsiventral and dichotomously branched. The thallus on the dorsal surface possess conspicuous median midrib which is marked by a shallow groove on dorsal surface. The dorsal surface appears to have rhomboidal or polygonal diamond shaped areas which indicate the outline of the underlying air chambers of the thallus (Figure 2.12). 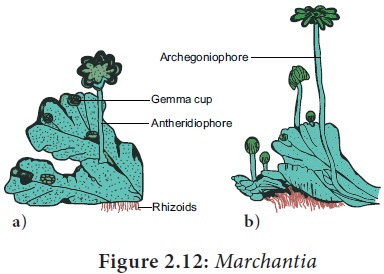 The dorsal surface also shows crescent shaped structures called gemma cups which contain vegetative reproductive structures called gemmae. The apical notch bears an apical cell which helps in the growth of the thallus.The ventral surface the thallus bears multicellular scales and rhizoids which help in fixation and absorption of water and minerals. The rhizoids are of two types namely smooth walled or pegged (tuberculate) type. On maturation the thallus bears erect antheriophores and archegoniophores. 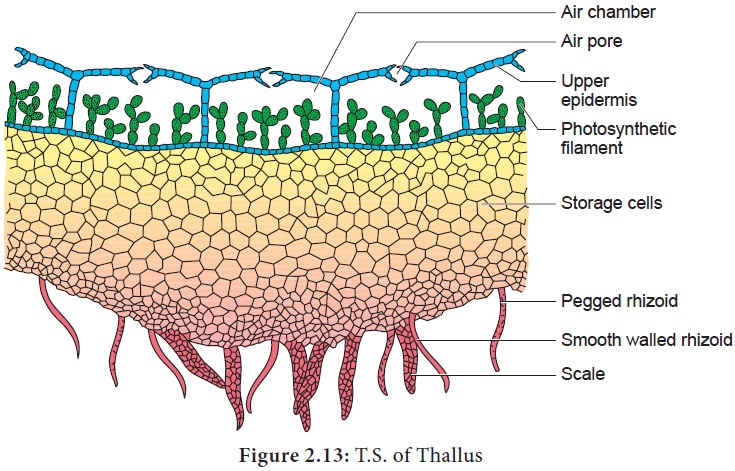 The epidermis has the upper and lower layers. The upper epidermis is single layered with thin walled parenchymatous cells. The cells possess chloroplasts. The upper epidermis is interrupted by many barrel shaped air pores which communicate with the air chambers. The pore is surrounded by 4 to 8 superimposed tiers of cells. Below the upper epidermis a number of air chambers are present in a single horizontal layer.The air chambers are separated from one another by partitions which extend from the epidermis to the floor of the air chambers. The floor of the chambers bears simple or branched green filaments. The cells of the filaments are involved in photosynthesis. The photosynthetic region is followed by storage region. It is made up of several parenchymatous cells arranged without intercellular spaces. The cells of this region contain starch grains and protein granules. The lower epidermis possesses rhizoids and multicellular scales.

Vegetative Reproduction takes place by progressive death and decay of thallus, formation of adventitious branches and by germination of gemmae. Death and decay of the thallus starts from posterior end .When it reach the point of dichotomy , two apical parts of the thallus get separated. Each one develops into an independent thallus. Adventitious branches are produced on the ventral surface of the gametophyte. The branches get separated from the parent thallus and grow into independent gametophytes. Gemmae are specialized multicellular asexual reproductive bodies. They are formed in small cupules known as gemma cups, present on the dorsal surface of the thallus. Usually the gemmae present on the male thallus form male plants and those on the female thallus give rise to female plants (Figure 2.14). 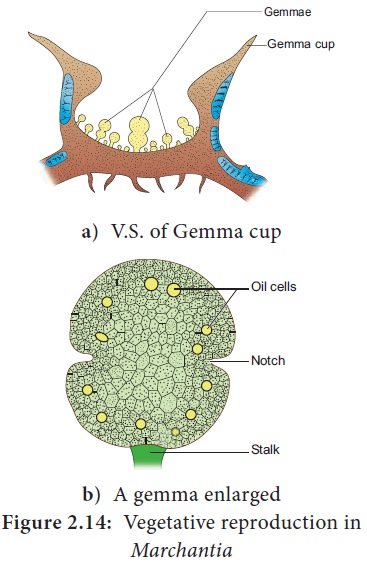 In Marchantia, sex organs are borne on special stalked receptacles called the gametophores. Those bearing antheridia are called antheridiophores and archegonia bearing structures are called archegoniophores (Figure 2.15). Marchantia is heterothallic or dioecious. i.e., male and female receptacles are present on different thalli. The sex organs in bryophytes are multicellular. The male sex organ is called antheridium. It produce biflagellate antherozoids. The female sex organ is flask shaped called archegonium and produces a single egg. Water is essential for fertilization. The antherozoids are released into water and are attracted towards archegonium through chemotaxis. Although many antherozoids enter the archegonium, only one fuses with the egg to form zygote. The zygote represent the first cell of the sporophytic generation. Zygote develops in to a multicellular structure called sporophyte. (Figure 2.16). 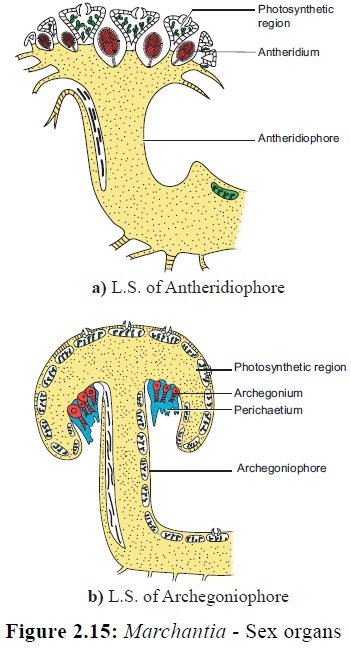 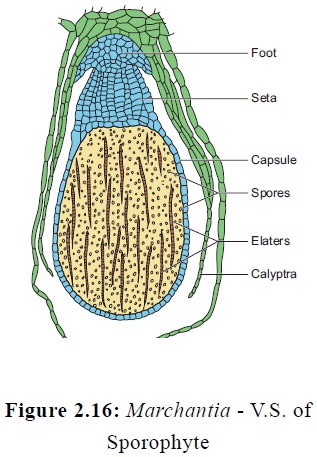 The sporophyte is not free-living but attached to the photosynthetic gametophyte and derives nutrition from it. Sporophyte is differentiated into foot, seta and capsule. The foot is bulbous and is embedded in the gametophyte. It derives nutrition from the gametophyte and transfers to the sporophyte. Seta is short and connects foot and capsule. The capsule consists of single layered jacket layer and encloses numerous haploid spores and elaters. The capsule is covered by protective covering called calyptra. On maturation the capsule dehisces and spores are released. Elaters helps in the dispersal of spores. The spores under favourable conditions germinate and develop into new gametophyte. The haploid gametophytic phase alternates with diploid sporophytic phase, thus the life cycle of Marchantia shows alternation of generation (Figure 2.17). 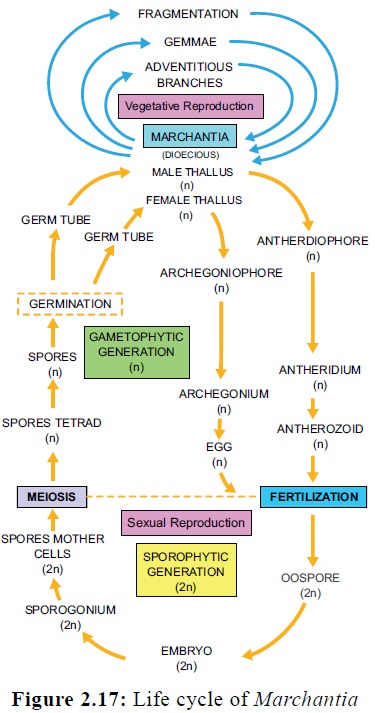