Funaria is commonly called ‘cord moss’. It is distributed throughout the world.

Funaria is commonly called ‘cord moss’. It is distributed throughout the world. Funaria hygrometrica is the common species. It grows in close tufts on rocks, trunks of trees, damp walls and damp soils. They help in the process of soil formation (Pedogenesis).

The plant body is a gametophyte. It is small, 1 to 3 cm high and consists of slender erect radial stem covered with small, simple leaf like structures arranged in a spiral manner. The gametophyte is attached to the substratum by means of multicellular rhizoids. They are characterized by the presence of oblique septa. The leaves are simple, sessile ovate and have broad membranous base and pointed apex.

The T.S. of axis shows the presence of epidermis, cortex and central cylinder. The epidermis is the outermost layer and contain chloroplast bearing cells. The cortex is made up of parenchymatous tissue. The cells of the young axis bear chloroplasts. In mature stems the outermost cells become reddish brown colour and become thick walled. Small leaf traces are also noticed. The central cylinder is made up of long, narrow, thin walled, colourless cells which lack protoplasts. They help in the conduction of water and minerals. 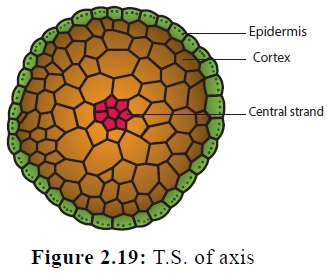 A well defined midrib is present. It consists of several layers of cells but the lateral ‘wing’ or lamina is made up of single layer of thin walled cells which are rich in chloroplasts. Midrib contains small strands of slightly thickened narrow cells which help in conduction.

2.        Formation of secondary protonema from any part of the gametophyte

3.        Formation of gemmae on terminal cells of the protonema.

4. Development of Bulbils on the rhizoids. 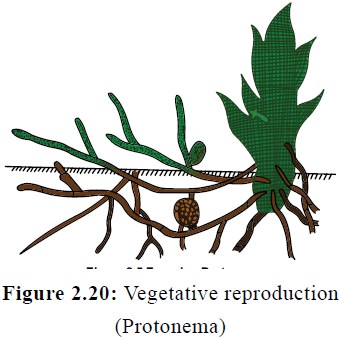 Funaria is monoecious the male and female reproductive sex organs are borne on different branches of the same gametophyte. Male sex organ is antheridium and it is formed in groups on the antheridial branch.They are enclosed by special leaves called perigonial leaves. A large number of long multicellular hairs interspersed with antherdia called paraphysis are also present. They contain chloroplast and are involved in photosynthesis. They protect antheridial head from by minimizing transpiration, hold water between them through capillary action and secrete mucilage which helps in the liberation of antherozoids. Each antheridium is protected by single layer of jacket. It encloses a large mass of androcytes. The androcytes transform in to biflagellate antherozoids (Figure 2.21). 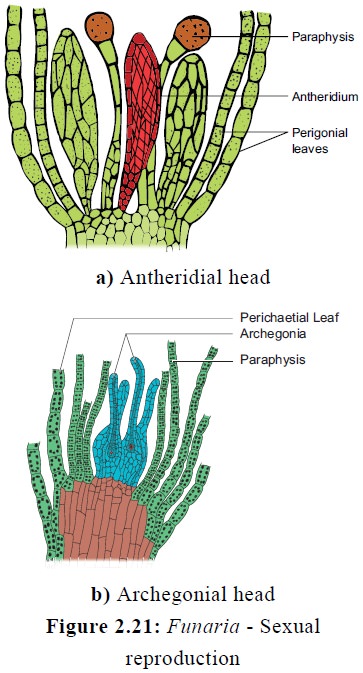 The female sex organ are the archegonia and are borne in clusters on the archegonial branch. Archegonial branches arise laterally at the base of the male branch. They are surrounded by perichaetial leaves. Paraphyses are also present. Each archegonium is flask shaped and is distinguished into a large venter and long neck region. The venter contains venter canal cell and egg. The neck contain neck canal cells (Figure 2.21). Water is essential for fertilization. Rain drops help in the transfer of antherozoids from antheridial head to archegonial head. The antherozoids are attracted to the archegonium through chemotaxis. A large number of antherozoids enter the neck of the archegonium but only one fuses with the egg to form a diploid zygote. The diploid zygote represents the first cell of sporophytic generation and divides to form a sporophyte.

Structure of Sporophyte or capsule

The structure of mature sporophyte of Funaria is complex. The sporophyte is differentiated into foot, seta and capsule (Figure 2.22) . The foot is small, conical and is embedded in the gametophyte. 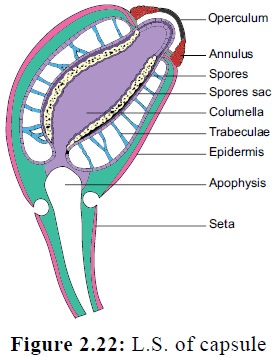 The seta is long, slender and conducts water and nutrients to the capsule . The capsule is differentiated into apophysis, theca proper and operculum. The cells constituting the wall of the capsule contain chloroplasts in them. The apophysis is the lowermost sterile region and connects the capsule with seta. The epidermis contains stomata which help in exchange of gases. The cells of the apophysis are photosynthetic, hence the sporophyte of Funaria partially depends on the gametophyte. The theca proper is the middle part and is fertile region of the capsule. It consists of a central columella surrounded by spore sac. The spore sac is surrounded by a single cylindrical air sac traversed by delicate filaments made up of parenchyma cells called trabeculae. The trabeculae extend from the outer wall of the spore sac to the innermost layer of the capsule wall. The spore sac contains spore mother cells which undergo meiotic division to produce haploid spores. The apical region consists of the operculum and peristome. The operculum is the lid of the capsule and comes out as a circular cup shaped lid after the dehiscence of the capsule. The peristome has one or two rows of thickened, tooth like projections found on the top of the capsule. They are hygroscopic and help in the dispersal of the spores. During favourble conditions the spores germinate to produce thread like green branched structure called protonema. It produces rhizoids and number of lateral buds which develop into new plants. In the life cycle of Funaria the haploid gametophytic phase (n)alternates with diploid sporophytic phase (2n) and shows alternation of generation (Figure 2.23). 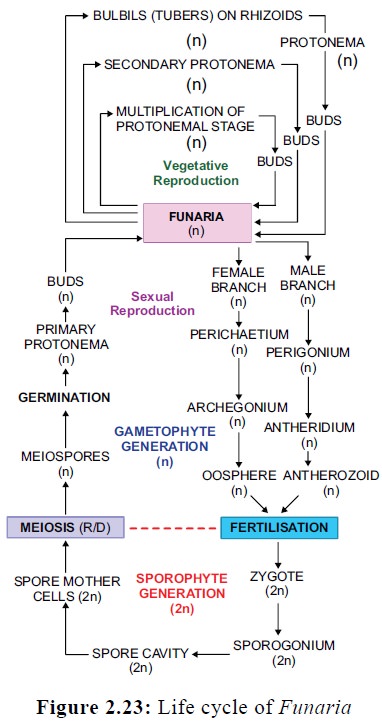