The salient features of Chlorophyceae, Phaeophyceae and Rhodophyceae are given below. 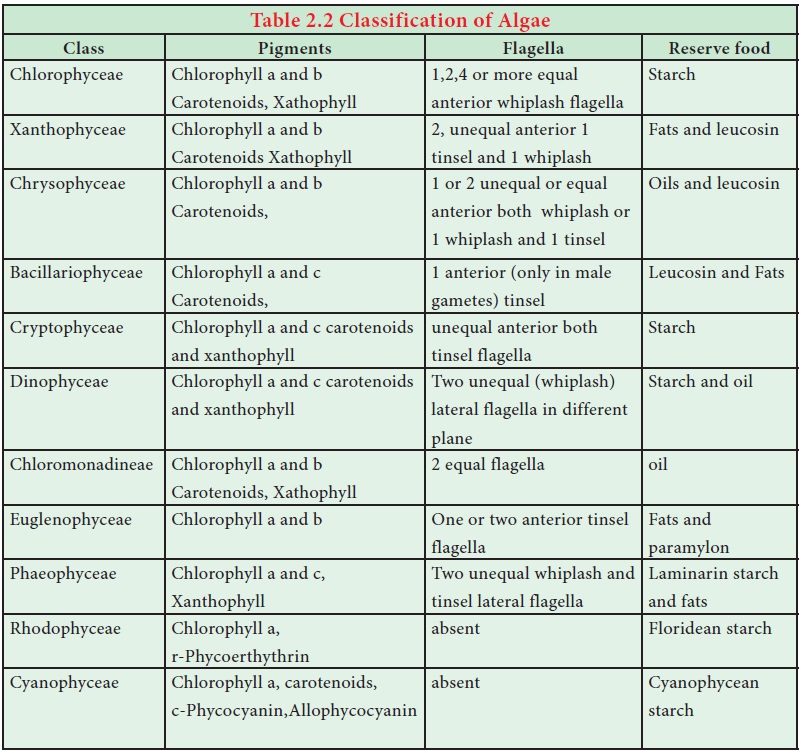 The salient features of Chlorophyceae, Phaeophyceae and Rhodophyceae are given below.

The members are commonly called ‘Green algae’ . Most of the species are aquatic(Fresh water-Spirogyra, Marine -Ulva). A few are terrestrial(Trentipohlia). Variation among the shape of the chloroplast is found in members of algae. It is Cup shaped (Chlamydomonas), Discoid (Chara), Girdle shaped, (Ulothrix), reticulate (Oedogonium), spiral (Spirogyra), stellate(Zygnema), plate like(Mougeoutia). Chlorophyll ‘a’ and Chlorophyll ‘b’ are the major photosynthetic pigments. Storage bodies called pyrenoids are present in the chloroplast and store starch. They also contain proteins. The cell wall is made up of inner layer of cellulose and outer layer of Pectin. Vegetative reproduction takes place by means of fragmentation and asexual reproduction is by the production of zoospores, aplanospores and akinetes­. Sexual reproduction is present and may be isogamous, anisogamous or ­Oogamous. Examples for this group of algae includes Chlorella, Chlamydomonas, Volvox, Spirogyra, Ulothrix, Chara and Ulva.

The members of this class are called ‘Brown algae’. Majority of the forms are found in marine habitats. Pleurocladia is a fresh water form. The thallus is filamentous (Ectocarpus) frond like (Dictyota)or may be giant kelps (Laminaria and Macrocystis). The thallus is differentiated into leaf like photosynthetic part called fronds, a stalk like structure called stipe and a holdfast which attach thallus to the substratum.

The Pigments include Chlorophyll a, c, carotenoids and Xanthophylls. A golden brown pigment called fucoxanthin is present and it gives shades of colour from olive green to brown to the algal members of this group. Mannitol and Laminarin are the reserve food materials. Motile reproductive structures are present. Two laterally inserted unequal flagella are present. Among these one is whiplash and another is tinsel. Although sexual reproduction ranges from isogamy to Oogamy, Most of the forms show Oogamous type. Alternation of generation is present (isomorphic, heteromorphic or diplontic). Examples for this group include Sargassum, Laminaria, Fucus and Dictyota.

Members of this group include ‘Red algae’ and are mostly marine. The thallus is multicellular, macroscopic and diverse in form. Porphyridium is the unicellular form. Filamentous (Goniotrichum) ribbon like (Porphyra) are also present. Corallina­ and Lithothamnion are heavily impregnated with lime and form coral reefs. Apart from chlorophyll a, r-phycoerythrin and r-phycocyanin are the photosynthetic pigments. Asexual reproduction takes place by means of monospores, neutral spores and tetraspores.

The storage product is floridean starch. Sexual reproduction is Oogamous. Male sex organ is spermatangium which produces spermatium. Female sex organ is called carpogonium. The spermatium is carried by the water currents and fuse with egg nucleus to form zygote. The zygote develops into carpospores. Meiosis occurs during carpospore formation. Alternation of generation is present. Examples for this group of algae include Ceramium, Polysiphonia, Gelidium, Cryptonemia­ and Gigartina.