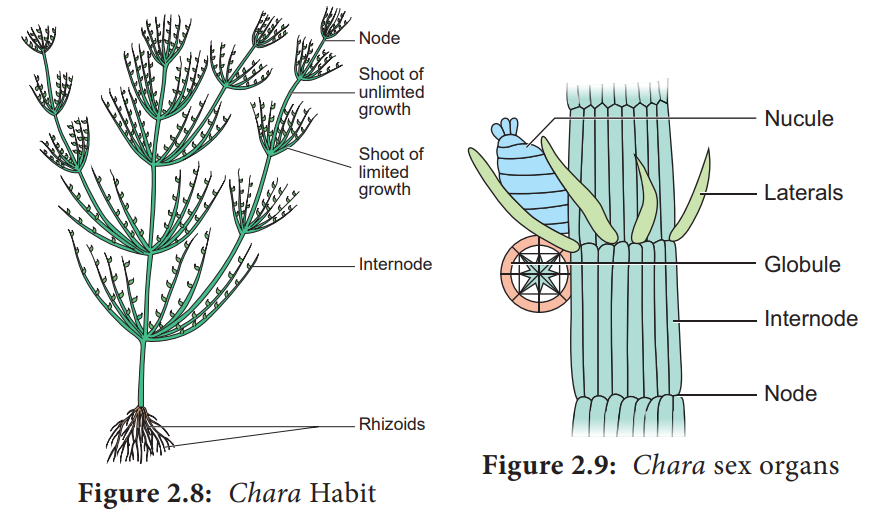 Chara is commonly called as ‘ stone wort’ It is a submerged aquatic freshwater alga growing attached to the mud of the lakes and slow running streams.

Chara is commonly called as ‘ stone wort’ It is a submerged aquatic freshwater alga growing attached to the mud of the lakes and slow running streams. Chara baltica grows in saline water. The thallus is often encrusted with calcium and magnesium carbonate.

The plant body is multicellular, macroscopic and is differentiated into main axis and rhizoids. The rhizoids are thread-like, multicellular structures arise from the lower part of the thallus or peripheral cells of the lower node.They are characterised by the presence of oblique septa. The rhizoids fix the main axis on the substratum and helps in the absorption of salts and solutes (Figure 2.8). 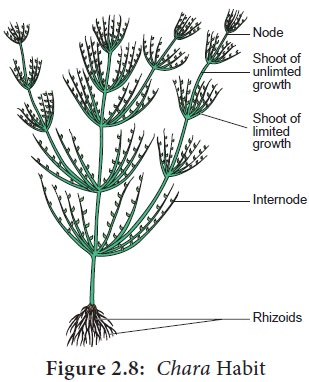 The main axis is branched, long and is differentiated into nodes and internodes. The internode is made up of an elongated cell in the centre called axial cell or internodal cell. The axial cell is surrounded by vertically elongated small cells which originate from the node. They are called cortical cells. In C. wallichii and C. corallina the cortical cells are absent. Three types of appendages arise from the node. They are  1. Branches of limited growth 2. Branches of unlimited growth 3. Stipuloides. The growth of the main axis and its branching takes place by the apical cell.

The cytoplasm is divided into outer ectoplasm and inner endoplasm. The endoplasm shows cytoplasmic streaming.

Sexual reproduction - Sexual reproduction is Oogamous. Sex organs are macroscopic and are produced on the branches of limited growth. The male sex organ is called Antheridium or Globule and the female sex organ is called Oogonium or Nucule (Figure 2.9). The Nucule is located above the Globule. The antheridium is spherical, macroscopic and its wall is made up of eight cells called shield cells. The antheridium has spermatogenous filaments. These filaments produce antherozoids. The nucule is covered by five spirally twisted tube cells and five coronal cells are present at the top of the nucule (Figure 2.9). The centre of the nucule possesses a single egg. 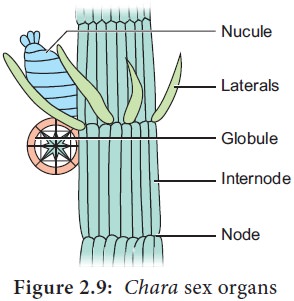 At maturity the tube cells separate and a narrow slit is formed. The antherozoids penetrate the oogonium and one of them fuses with the egg to form a diploid oospore. The oospore secretes a thick wall around and germinates after the resting period. The nucleus of the oospore divides to form 4 haploid daughter nuclei of which, three degenerate. The oospore or zygote germinates to produce haploid protonema. The plant body of Chara is haploid and The oospore is the only diploid phase in the life cycle.  Therefore, the life cycle is of haplontic type. Alternation of generations is present (Figure 2.10). 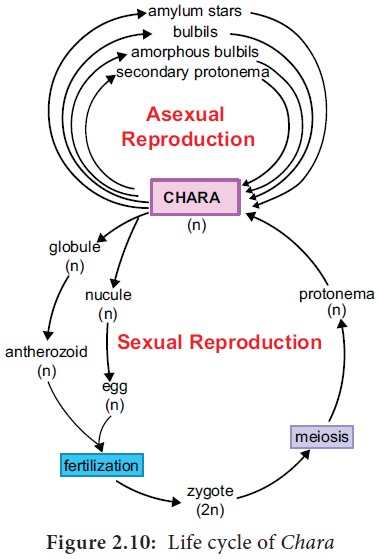