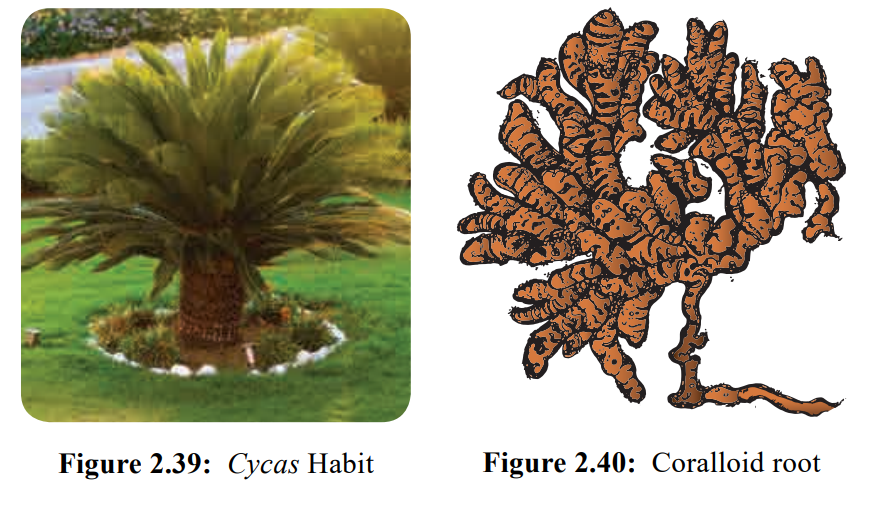 It is widely distributed in tropical and sub tropical region of eastern hemisphere of the world.

It is widely distributed in tropical and sub tropical region of eastern hemisphere of the world. Cycas revoluta, Cycas beddomei, Cycas circinalis, Cycas rumphii are some of the common species. The plant body is sporophyte and resemble a small palm. The growth is very slow. It is evergreen and xerophytic in nature.

The sporophyte is differentiated into root, stem and leaves. The stem is columnar bearing a crown of spirally arranged pinnately compound leaves (Figure 2.39). 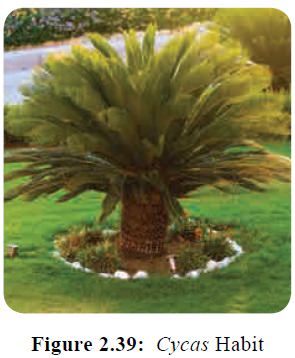 Two types of roots are found in Cycas. They are the tap root and coralloid root.

The primary root persists and forms the tap root. Some of the lateral roots give rise to branches which grow vertically upward below the ground level. They branch repeatedly to form dichotomously branched coral- like roots called coralloid roots. The cortical region of the coralloid root contains the Blue green alga – Anabaena sp. which helps in nitrogen fixation (Figure 2.40). 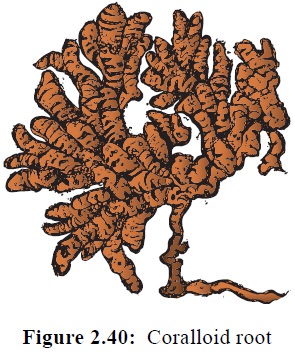 The stem is columnar, unbranched and woody. It is covered with persistent woody leaf bases. The stem also bears adventitious buds at the base.

Cycas has two types of leaves

(i)       Foliage or assimilatory leaves

(i) Foliage or assimilatory leaves

Foliage leaves are large, pinnately compound and form a crown at the top of the stem. Each leaf has 80-100 pairs of sessile leaflets. The apex is acute or spiny. The leaflet has a single midvein. Lateral veins are absent. Circinate vernation is present and young leaves are covered with ramenta.

Scale leaves are brown, small, triangular and persistent which are protective in function. They are covered with ramenta.

The internal organization of the primary root reveals the following parts.

1. Epiblema, 2. Cortex 3. Vascular region (Figure 2.41). Epiblema is the outermost layer and is made up of single layered parenchyma. It is followed by thin walled parenchymatous cortex. The cortex is delimited by single layered endodermis. A multilayered parenchymatous pericycle is present and it surrounds the vascular tissue. The xylem is diarch in young root and tetrarch in older ones. Secondary growth is present. Coralloid root also shows similar structure but the middle cortex is characterized by the presence of Algal zone. Blue green alga called, Anabaena is found in this zone. The xylem is triarch and exarch. 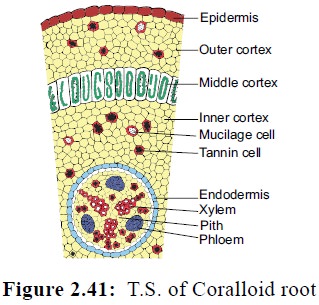 The cross section of young stem is irregular in outline due to the presence of persistent leaf bases. It is differentiated into epidermis, cortex and vascular cylinder. It resembles the structure of a dicot stem (Figure 2.42). 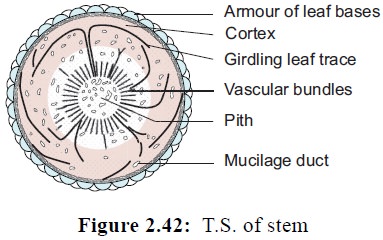 The epidermis is the outermost layer and is covered with thick cuticle. It is discontinuous due to the presence of leaf bases. The cortex constitutes the major part and is made up of thin walled parenchymatous cells. The cells are filled with starch grains. Cortex also possesses several mucilage ducts and tannin cells. In young stem the vascular bundles are arranged in the form of a ring. A broad medullary ray is present. The vascular bundles are conjoint, collateral, endarch and open. Xylem is made up of tracheids and phloem consists of sieve tubes and phloem parenchyma. Companion cells are absent. The cambium present in the vascular bundle is active for short period. The secondary cambium is formed from the pericycle or cortex and helps in secondary growth of the stem. The cortical region shows a large number of leaf traces. The presence of direct leaf traces and girdling leaf trace is the unique feature of Cycas stem. Secondary growth results in polyxylic condition. Phellogen and cork are formed and replace the epidermis.The wood formed belongs to manoxylic type.

The outermost layer is epidermis and is covered by thick cuticle. The hypodermis is made up of two layers of sclerenchyma on the adaxial side and many layered on the abaxial side. The ground tissue is parenchymatous. The peculiar feature of the rachis is the arrangement of vascular bundle i.e., in an inverted Omega shape pattern (Figure 2.43). Each vascular bundle is covered by a single layered sclerenchymatous bundle sheath. Vascular bundles are collateral, endarch and open. A single layered endodermis and few layered pericycle surrounds the bundle. A diploxylic condition is present in the vascular bundles.( presence of both centripetal and centrifugal xylem). 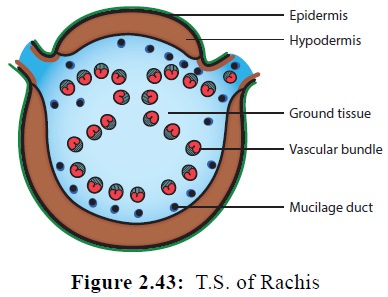 The leaflet of Cycas in transverse section shows the presence of upper and lower epidermis. The epidermal cells are thick walled and are covered with thick cuticle. The lower epidermis is not continuous and is interrupted by sunken stomata. The hypodermis consists of sclerenchyma cells to prevent transpiration. The mesophyll is differentiated into palisade and spongy parenchyma. 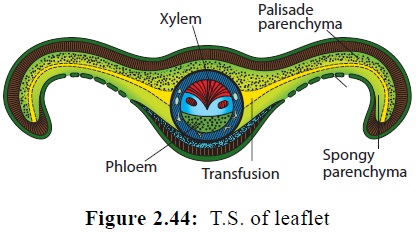 The cells of this layer are involved in photosynthesis. The spongy parenchyma present in close proximity to the lower epidermis bear large intercellular spaces which help in gaseous exchange.

Layers of colourless, elongated cells which run parallel to the leaf surface from the midrib to the margin of the leaflet are seen. These constitute the Transfusion tissue that helps in the lateral conduction of water. The vascular bundle has xylem facing upper epidermis and phloem facing lower epidermis. The protoxylem occupies the centre, hence the bundle is mesarch. The vascular bundle has a sclerenchymatous bundle sheath (Figure 2.44).

Cycas reproduces by both vegetative and sexual methods

It takes place by adventitious buds or bulbils. They develop in the basal part of the stem. The bulbils on germination produce new plants.

Cycas is dioecious i.e., male and female cones are produced in separate plants. It is heterosporous and produces two types of spores (Figure 2.45). 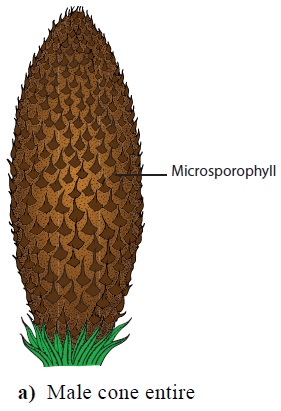 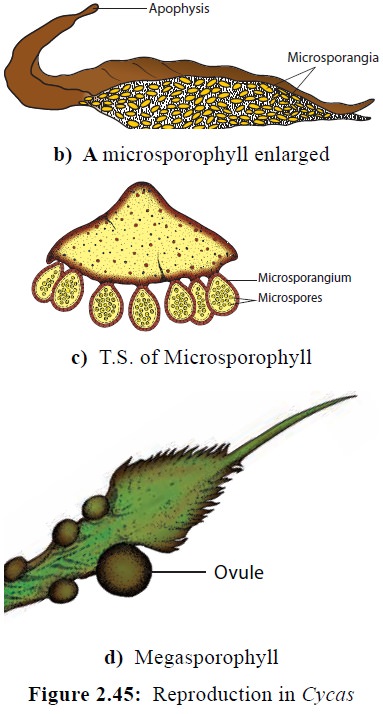 The male cone or staminate cone are borne singly on the terminal part of the stem. The growth of the stem is continued by the formation of axillary buds at the base of the cone. The male cone is displaced to one side showing sympodial growth in the stem. Male cones are stalked, compact, oval or conical and woody in structure. It consists of several microphylls which are arranged spirally around a central cone axis.

Microsporophylls are flat, leaf-like and woody structures with narrow base and expanded upper portion. The upper expanded portion becomes pointed and is called apophysis. The narrow base is attached to the cone axis. Each microsporophyll contains thousands of microsporangia in groups called sori on abaxial (lower) surface. Development of sporangium is of Eusporangiate type. The spore mother cell undergoes meiosis to produce halpoid microspores. Each Microsporangium bears large number of microspores or pollen grains. Each sporangium is provided with a radial line of dehiscence, which helps in the dispersal of spores. Each microspore (Pollen grain) is a rounded, unicellular and uninucleate structure surrounded by outer thick exine and an inner thin intine. The microspore represents the male gametophyte.

The megasporophylls of Cycas are not organised into cones. They occur in close spirals around the tip of the stem of female plant. The megasporophylls are flat and measuring 15 -30 cm in length. Each megasporophyll is differentiated into a basal stalk and an upper leaf like portion. The ovules are attached to the lateral side of the sporophyll. The ovules contain megaspore and it represent the female gametophyte.

Cycas produces the largest ovule of the plant kingdom. The ovules are orthotropous, unitegmic and possess a short stalk. The single integument is very thick and covers the ovule leaving a small opening called micropyle. The integument consists of 3 layers, the outer and inner are fleshy (sarcotesta), the middle layer is stony called sclerotesta. The inner layer remains fused with the nucellus. The nucellus grows out into a beak-like structure and the upper part dissolves and forms a cavity-like structure called pollen chamber. A single megaspore mother cell undergoes meiosis to form four haploid megaspores. The lowermost becomes functional and others get degenerated. The nucellus gets reduced in the form of a thin papery layer in mature seeds and encloses the female gametophyte An enlarged megaspore or the ­embryo-sac is present within the nucellus. An archegonial chamber with 3-6 archegonia are present in the archegonial chamber below the pollen chamber (Figure 2.46). 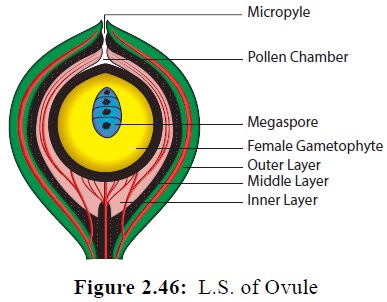 Pollination is carried out by wind and occurs at 3 celled stage(a prothallial cell, a large tube cell and a small generative cell). Pollen grains gets lodged in the pollen chamber after pollination. The generative cell divides into a stalk and a body cell. The body cell divides to produce two large multiciliated antherozoids or sperms. During fertilization, one of the male gamete or multiciliated antherozoid fuses with the egg of the archegonium to form a diploid zygote (2n). The endosperm is haploid. The interval between pollination and fertilization is 4- 6 months. The zygote undergoes mitotic division and develops into embryo. The ovule is transformed into seed. The seed has two unequal cotyledons. Germination is hypogeal. The life cycle shows alternation of generations (Figure 2.47). 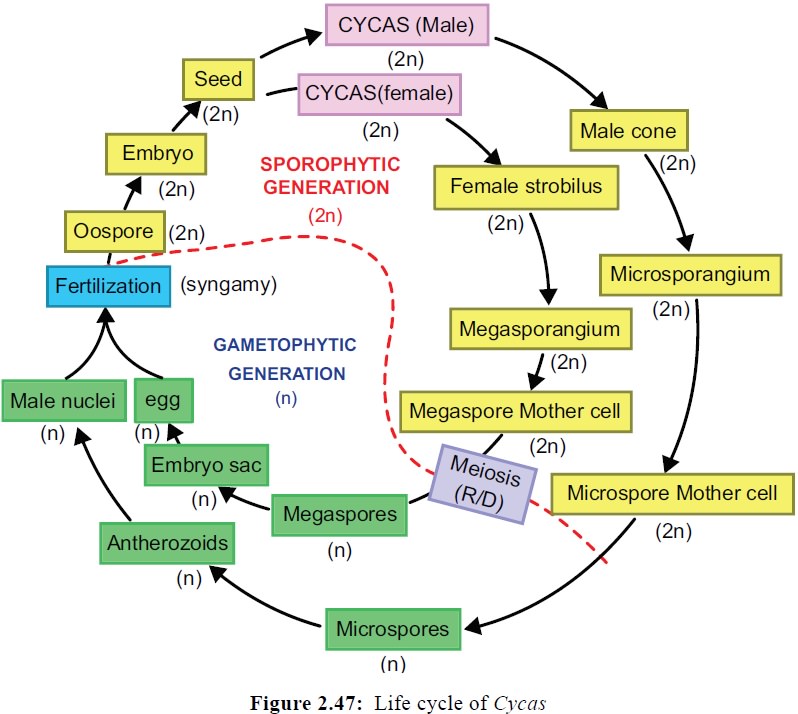