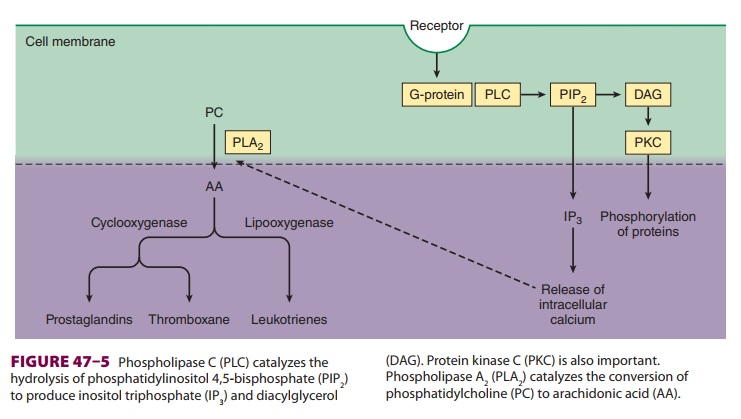 Nociceptors are characterized by a high threshold for activation and encode the intensity of stimulation by increasing their discharge rates in a graded fashion.

Nociceptors are characterized by a high threshold for activation and encode the intensity of stimula-tion by increasing their discharge rates in a graded fashion. Following repeated stimulation, they char-acteristically display delayed adaptation, sensitiza-tion, and afterdischarges.

Noxious sensations can often be broken down into two components: a fast, sharp, and well-localized sensation (“first pain”), which is conducted with a short latency (0.1 s) by Aδ fibers (tested by pin-prick); and a slower onset, duller, and often poorly localized sensation (“second pain”), which is con-ducted by C fibers. In contrast to epicritic sensation, which may be transduced by specialized end organs on the afferent neuron (eg, pacinian corpuscle for touch), protopathic sensation is transduced mainly by free nerve endings.

Most nociceptors are free nerve endings that sense heat and mechanical and chemical tissue damage. Types include (1) mechanonociceptors, which respond to pinch and pinprick, (2) silent nociceptors, which respond only in the presence of inflammation, and (3) polymodal mechanoheat nociceptors. The last are most prevalent and respond to excessive pressure, extremes of temperature (>42°C and <40°C), and noxious substances such as bradykinin, histamine, serotonin (5-hydroxytrypta-mine or 5-HT), H+, K+, some prostaglandins, capsa-icin, and possibly adenosine triphosphate. At least two nociceptor receptors (containing ion channels in nerve endings) have been identified, TRPV1 and TRPV2. Both respond to high temperatures. Cap-saicin stimulates the TRPV1 receptor. Polymodal nociceptors are slow to adapt to strong pressure and display heat sensitization.

Nociceptors are present in both somatic and visceral tissues. Primary afferent neurons reach tissues by traveling along spinal somatic, sympathetic, or para-sympathetic nerves. Somatic nociceptors include those in skin (cutaneous) and deep tissues (muscle, tendons, fascia, and bone), whereas visceral nocicep-tors include those in internal organs. The cornea and tooth pulp are unique in that they are almost exclu-sively innervated by nociceptive Aδ and C fibers.

Deep somatic nociceptors are less sensitive to nox-ious stimuli than cutaneous nociceptors but are easily sensitized by inflammation. The pain arising from them is characteristically dull and poorly local-ized. Specific nociceptors exist in muscles and joint capsules, and they respond to mechanical, thermal, and chemical stimuli.

Like somatic nociceptors, those in the viscera are the free nerve endings of primary afferent neu-rons whose cell bodies lie in the dorsal horn. These afferent nerve fibers, however, frequently travel with efferent sympathetic nerve fibers to reach the viscera. Afferent activity from these neurons enters the spinal cord between T1 and L2. Nociceptive C fibers from the esophagus, larynx, and trachea travel with the vagus nerve to enter the nucleus sol-itarius in the brainstem. Afferent pain fibers from the bladder, prostate, rectum, cervix and urethra, and genitalia are transmitted into the spinal cord via parasympathetic nerves at the level of the S2–S4 nerve roots. Though relatively few compared with somatic pain fibers, fibers from primary visceral afferent neurons enter the cord and synapse more diffusely with single fibers, often synapsing with multiple dermatomal levels and often crossing to the contralateral dorsal horn.

Several neuropeptides and excitatory amino acids function as neurotransmitters for afferent neurons subserving pain (Table 47–4). Many, if not most, of these neurons contain more than one neurotrans-mitter, which are simultaneously released. The most important of these peptides are substance P and calcitonin gene-related peptide (CGRP). Glutamate is the most important excitatory amino acid.Substance P is an 11 amino acid peptide that is synthesized and released by first-order neurons both peripherally and in the dorsal horn. Also found in other parts of the nervous system and the intestines 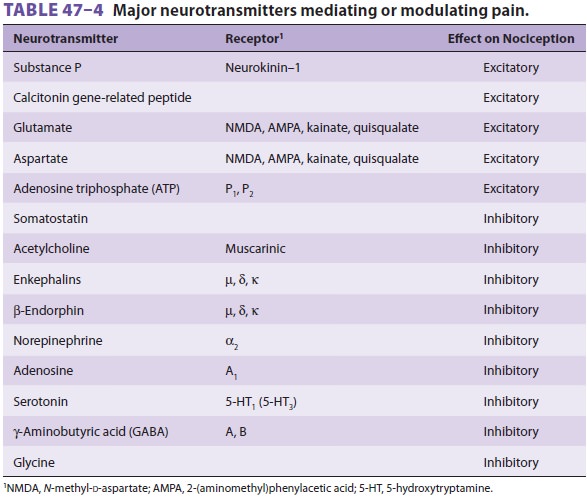 it facilitates transmission in pain pathways via neu-rokinin-1 receptor activation. In the periphery, sub-stance P neurons send collaterals that are closely associated with blood vessels, sweat glands, hair follicles, and mast cells in the dermis. Substance P sensitizes nociceptors, degranulates histamine from mast cells and 5-HT from platelets, and is a potent vasodilator and chemoattractant for leukocytes. Substance P–releasing neurons also innervate the viscera and send collateral fibers to paravertebral sympathetic ganglia; intense stimulation of viscera, therefore, can cause direct postganglionic sympa-thetic discharge.

Both opioid and α2-adrenergic receptors have been described on or near the terminals of unmy-elinated peripheral nerves. Although their physi-ological role is not clear, the latter may explain the observed analgesia of peripherally applied opioids, particularly in the presence of inflammation.

Modulation of pain occurs peripherally at the nociceptor, in the spinal cord, and in supraspinal structures. This modulation can either inhibit (suppress) or facilitate (intensify) pain.

Sensitization of nociceptors results in a decrease in threshold, an increase in the frequency response to the same stimulus intensity, a decrease in response latency, and spontaneous firing even after cessation 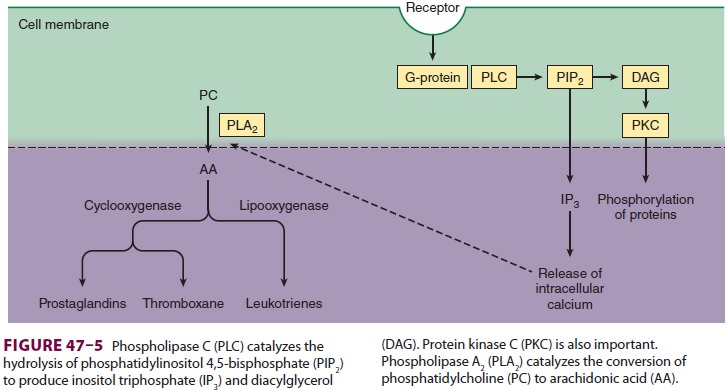 Prostaglandins are produced following tissue damage by the action of phospholipase A 2 on phos-pholipids released from cell membranes to form arachidonic acid (Figure 47–5). The cyclooxygen-ase (COX) pathway then converts the latter into endoperoxides, which in turn are transformed into prostacyclin and prostaglandin E2 (PGE2). PGE2 directly activates free nerve endings, whereas pros-tacyclin potentiates the edema from bradykinin. The lipoxygenase pathway converts arachidonic acid into hydroperoxy compounds, which are sub-sequently converted into leukotrienes. The role of the latter is not well defined, but they appear to potentiate certain types of pain. Pharmacological agents such as acetylsalicylic acid (ASA, or aspirin),

acetaminophen, and nonsteroidal antiinflammatory drugs (NSAIDs) produce analgesia by inhibition of COX. The analgesic effect of corticosteroids is likely the result of inhibition of prostaglandin production through blockade of phospholipase A2 activation.

Neurogenic inflammation, also called secondary hyperalgesia, plays an important role in peripheral sensitization following injury. It is manifested by the “triple response (of Lewis)” of a red flush around the site of injury (flare), local tissue edema, and sensiti-zation to noxious stimuli. Secondary hyperalgesia is primarily due to antidromic release of substance P (and probably CGRP). Substance P degranulates his-tamine and 5-HT, vasodilates blood vessels, causes tissue edema, and induces the formation of leukotri-enes. The neural origin of this response is supported by the following findings: (1) it can be produced by electrical stimulation of a sensory nerve, (2) it is not observed in denervated skin, and (3) it is diminished by injection of a local anesthetic. Capsaicin applied topically in a gel, cream, or patch depletes substance P and diminishes neurogenic inflammation, and is useful for some patients with postherpetic neuralgia.

At least three mechanisms are responsible for central sensitization in the spinal cord:

·        Wind-up and sensitization of second-order neurons. WDR neurons increase their frequency of discharge with the same repetitive stimuli and exhibit prolonged discharge, even after afferent C fiber input has stopped.

·        Receptor fi eld expansion. Dorsal horn neurons increase their receptive fields such that adjacent neurons become responsive to stimuli (whether noxious or not) to which they were previously unresponsive.

Glutamate and aspartate play important roles in wind-up, via activation of N-methyl-d-aspartate (NMDA) and other receptor mechanisms, and in the induction and maintenance of central sensitiza-tion. Activation of NMDA receptors also induces nitric oxide synthetase, increasing formation of nitric oxide. Both prostaglandins and nitric oxide facilitate the release of excitatory amino acids in the spinal cord. Thus, COX inhibitors such as ASA and NSAIDs have important analgesic actions in the spi-nal cord.

Transmission of nociceptive input in the spinal cord can be inhibited by segmental activity in the cord itself, as well as by descending neural activity from supraspinal centers.

1.Segmental inhibition—Activation of large affer-ent fibers subserving sensation inhibits WDR neuron and spinothalamic tract activity. Moreover, activation of noxious stimuli in noncontiguous parts of the body inhibits WDR neurons at other levels, which may explain why pain in one part of the body inhibits pain in other parts. These two phenomena support a “gate” theory for pain processing in the spinal cord.

Glycine and γ-aminobutyric acid (GABA) are amino acids that function as inhibitory neurotrans-mitters and likely play an important role in segmen-tal inhibition of pain in the spinal cord. Antagonism of glycine and GABA results in powerful facilita-tion of WDR neurons and produces allodynia and hyperesthesia. There are two subtypes of GABA receptors: GABA A, of which muscimol is an agonist, and GABAB, of which baclofen is an agonist. Seg-mental inhibition appears to be mediated by GABA B receptor activity. The GABAA receptor functions as a Cl− channel, and benzodiazepines activate this chan-nel. Activation of glycine receptors also increases Cl− conductance across neuronal cell membranes. The action of glycine is more complex than that of GABA, because the former also has a facilitatory (excitatory) effect on the NMDA receptor.

Adenosine also modulates nociceptive activity in the dorsal horn. At least two receptors are known: A1, which inhibits adenyl cyclase, and A2, which stimulates adenyl cyclase. The A1 receptor mediates adenosine’s antinociceptive action. Methylxanthines can reverse this effect through phosphodiesterase inhibition.

2. Supraspinal inhibition—Several supraspinalstructures send fibers down the spinal cord to inhib-it pain in the dorsal horn. Important sites of origin for these descending pathways include the periaque-ductal gray, reticular formation, and nucleus raphe magnus (NRM). Stimulation of the periaqueduc-tal gray area in the midbrain produces widespread analgesia in humans. Axons from these tracts act presynaptically on primary afferent neurons and postsynaptically on second-order neurons (or in-terneurons). These pathways mediate their antino-ciceptive action via α2-adrenergic, serotonergic, and opiate (µ, δ, and κ) receptor mechanisms. The role of monoamines in pain inhibition explains the analge-sic efficacy of antidepressants that block reuptake of catecholamines and serotonin.

Inhibitory adrenergic pathways originate pri-marily from the periaqueductal gray area and the reticular formation. Norepinephrine mediates this action via activation of presynaptic or postsynaptic α2receptors. At least part of the descending inhibi-tion from the periaqueductal gray is relayed first to the NRM and medullary reticular formation; sero-tonergic fibers from the NRM then relay the inhi-bition to dorsal horn neurons via the dorsolateral funiculus.

The endogenous opiate system (primarily the NRM and reticular formation) acts via methionine enkephalin, leucine enkephalin, and β-endorphin, all of which are antagonized by naloxone. These opioids act presynaptically to hyperpolarize pri-mary afferent neurons and inhibit the release of substance P; they also appear to cause some postsyn-aptic inhibition. Exogenous opioids preferentially act postsynaptically on the second-order neurons or interneurons in the substantia gelatinosa.