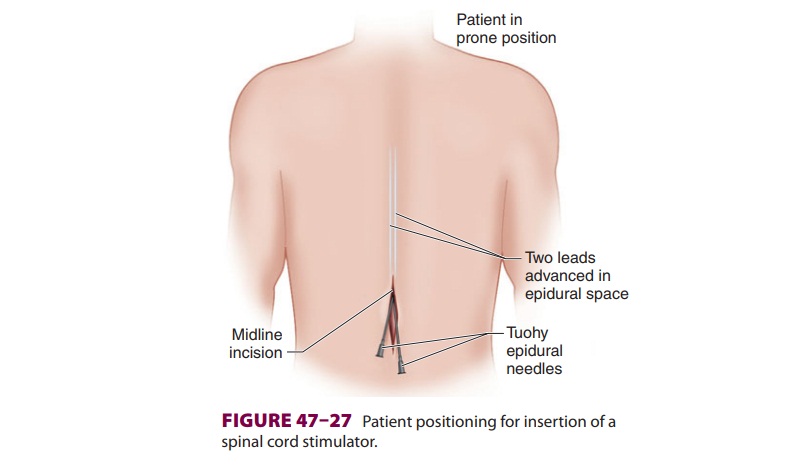 Electrical stimulation of the nervous system can produce analgesia in patients with acute and chronic pain.

Electrical stimulation of the nervous system can produce analgesia in patients with acute and chronic pain. Current may be applied transcutaneously, epi-durally, or by electrodes implanted into the central nervous system.

Transcutaneous electrical nerve stimulation (TENS) is thought to produce analgesia by stimulating large afferent fibers. It may have a role for patients with mild to moderate acute pain and those with chronic low back pain, arthritis, and neuropathic pain. The gate theory of pain processing suggests that the afferent input from large epicritic fibers competes with that from the smaller pain fibers. An alternative theory proposes that at high rates of stimulation, TENS causes conduction block in small afferent pain fibers. With conventional TENS, electrodes are applied to the same dermatome as the pain and are stimulated periodically by direct current from a generator (usually for 30 min sev-eral times a day). A current of 10–30 mA with a pulse width of 50–80 µs is applied at a frequency of 80–100 Hz. Some patients whose pain is refractory to conventional TENS respond to low-frequency TENS (acupuncture-like TENS), which employs stimuli with a pulse width greater than 200 µs at frequencies less than 10 Hz (for 5–15 min). Unlike conventional TENS, low-frequency stimulation is at least partly reversed by naloxone, suggesting a role for endogenous opioids. This technique is also called dorsal column stimulation because it was thought to produce analgesia by directly stimulat-ing large Aβ fibers in the dorsal columns of the spi-nal cord. Proposed mechanisms include activation of descending modulating systems and inhibition of sympathetic outflow.

Temporary electrodes are initially placed in the posterior epidural space and connected to an exter-nal generator to evaluate efficacy in a 5- to 7-day trial ( Figures 47–27 and 47–28). The trial may be extended, particularly if it allows a patient, such as one with CRPS, to tolerate more aggressive physical therapy. If a favorable response is obtained, a fully 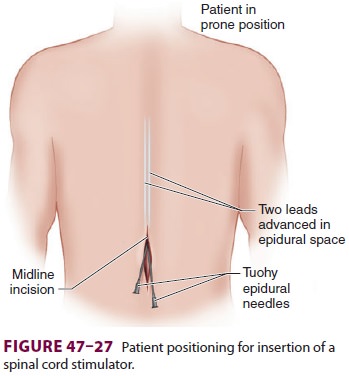 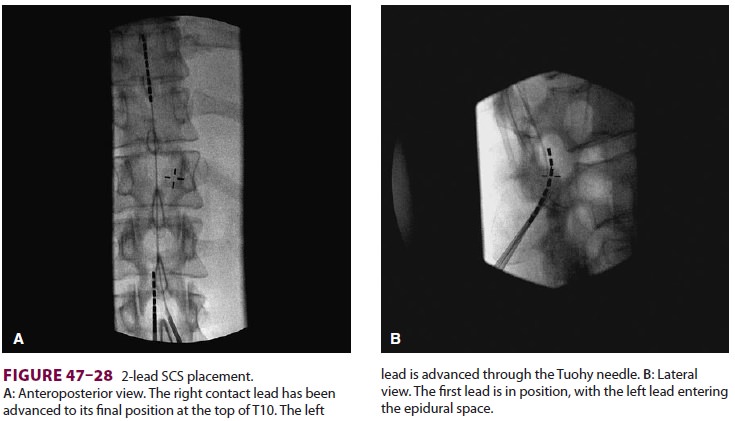 implantable system is inserted. Unfortunately, the effectiveness of the technique decreases with time in some patients. Complications include infection, lead migration, and lead breakage. 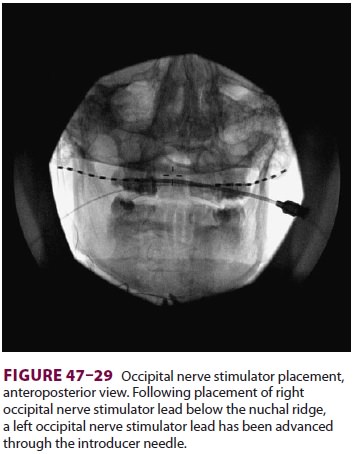 Deep brain stimulation (DBS) is used for intrac-table cancer pain and for intractable nonmalig-nant neuropathic pain. Electrodes are implanted stereotactically into the periaqueductal and peri-ventricular gray areas for nociceptive pain, usually in patients with cancer or chronic low back pain.

For neuropathic pain, the electrodes are frequently implanted into the ventral posterolateral and ven-tral posteromedial thalamic nuclei. DBS may also be helpful for patients with movement disorders, headache, and neuropsychiatric disorders. The most serious complications are intracranial hemorrhage and infection.