Pharmacological or anatomic differential neural blockade has been advocated as a method of dis-tinguishing somatic, sympathetic, and psychogenic pain mechanisms.

Pharmacological or anatomic differential neural blockade has been advocated as a method of dis-tinguishing somatic, sympathetic, and psychogenic pain mechanisms. The procedure is controversial owing to the challenges of interpreting the data and the inability to define exactly which nerve fibers or pathways are blocked. Theoretically, the pharmaco-logical approach relies on the differential sensitivity of nerve fibers to local anesthetics. Preganglionic sympathetic (B) fibers are reported to be most sen-sitive, closely followed by pain (Aδ) fibers, somato-sensory (Aβ) fibers, motor fibers (Aα), and finally C fibers. By using different concentrations of local anesthetic, it may be possible to selectively block certain types of fibers while preserving the func-tion of others. The challenge is that the critical con-centration needed to block sympathetic fibers can vary considerably between patients, and conduction block by local anesthetics is dependent not only on fiber size but also on the duration of contact and fre-quency of impulses conducted. Many clinicians have therefore abandoned the use of pharmacological dif-ferential neural blocks in favor of anatomic differen-tial blockade. 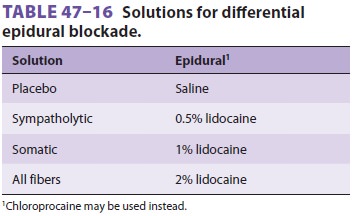 Differential epidural blocks may be used for thoracic pain when the techniques for sympathetic blockade carry a significant risk of pneumothorax (Table 47–16). After each epidural injection, the patient is evaluated for pain relief, signs of sym-pathetic blockade (a decrease in blood pressure), sensation to pinprick and light touch, and motor function. If the pain disappears after the saline injection, the patient either has psychogenic pain (usually a profound long-lasting effect) or is dis-playing a placebo effect (usually short lasting). If pain relief coincides with isolated signs of sympa-thetic blockade, it is likely mediated by sympathetic fibers. If pain relief only follows somatosensory blockade, it is likely mediated by somatic fibers. Lastly, if the pain persists even after signs of motor blockade, the pain is either central (supraspinal) or psychogenic.

The differential epidural block carries the risk of any neuraxial block, and the possibility of hypo-tension and blocking cardiac accelerator fibers at T1–T4. The level should not extend above the T5 dermatome due to these risks. Following catheter insertion, injections should be administered with the patient in a monitored setting for the rest of this procedure.

Although differential epidural blockade has limitations, it may be helpful to identify primarily centralized pain when a patient continues to have a significant level of pain despite multilevel dermato-mal blockade over the painful region. It is unlikely that a subsequent nerve block would help to treat the painful condition.

When it is thought that a patient may have abdominal pain from the anterior abdominal wall, a transversus abdominis plane (TAP) block may be performed using ultrasound guidance. This may offer potential short- or long-term relief and can be considered as an alternative to differential epidural blockade. If no relief is obtained, the pain may have a visceral origin or a central cause. Visceral pain may best respond to a celiac or splanchnic nerve block and possibly to subsequent splanchnic RFA. Patients with pain that is primarily of a central origin may respond to multidisciplinary therapy, including counseling and biofeedback training.