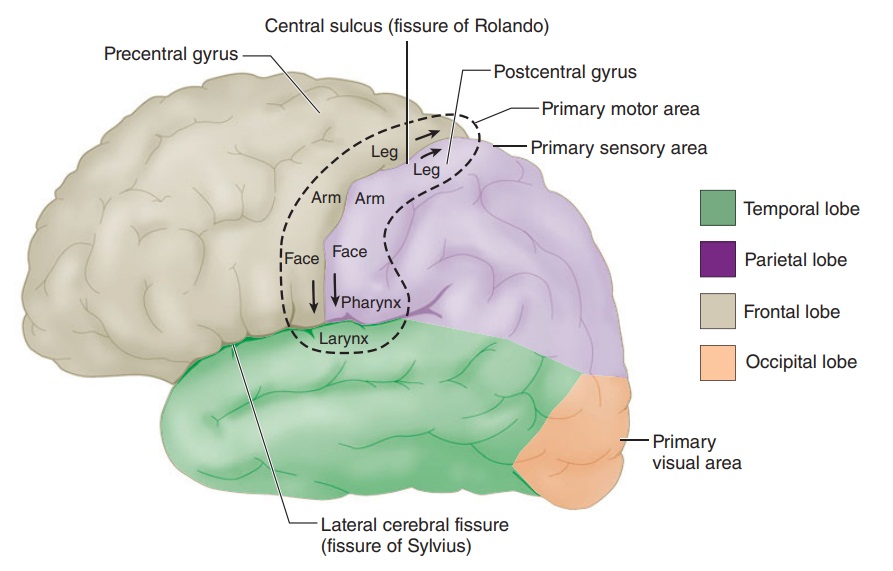 Pain is conducted along three neuronal pathways that transmit noxious stimuli from the periphery to the cerebral cortex.

Pain is conducted along three neuronal pathways that transmit noxious stimuli from the periphery to the cerebral cortex (Figure 47–1). The cell bodies of primary afferent neurons are located in the dorsal root ganglia, which lie in the vertebral foramina at each spinal cord level. Each neuron has a single axon that bifurcates, sending one end to the peripheral tissues it innervates and the other into the dorsal horn of the spinal cord. In the dorsal horn, the pri-mary afferent neuron synapses with a second-order neuron whose axon crosses the midline and ascends in the contralateral spinothalamic tract to reach the thalamus. Second-order neurons synapse in tha-lamic nuclei with third-order neurons, which in turn send projections through the internal capsule and corona radiata to the postcentral gyrus of the cerebral cortex ( Figure 47–2). 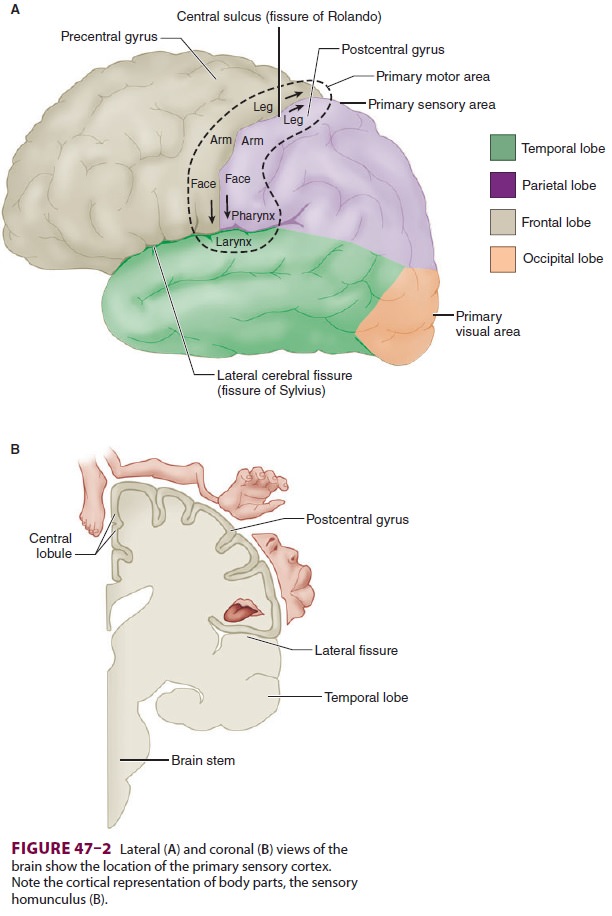 The majority of first-order neurons send the proximal end of their axons into the spinal cord via the dorsal (sensory) spinal root at each cervical, thoracic, lum-bar, and sacral level. Some unmyelinated afferent (C) fibers have been shown to enter the spinal cord via the ventral nerve (motor) root, accounting for obser-vations that some patients continue to feel pain even after transection of the dorsal nerve root (rhizotomy) and report pain following ventral root stimulation. Once in the dorsal horn, in addition to synapsing with second-order neurons, the axons of first-order neurons may synapse with interneurons, sympathetic neurons, and ventral horn motor neurons.

Pain fibers originating from the head are carried by the trigeminal (V), facial (VII), glossopharyngeal (IX), and vagal (X) nerves. The gasserian ganglion contains the cell bodies of sensory fibers in the oph-thalmic, maxillary, and mandibular divisions of the trigeminal nerve. Cell bodies of first-order afferent neurons of the facial nerve are located in the genicu-late ganglion; those of the glossopharyngeal nerve lie in its superior and petrosal ganglia; and those of the vagal nerve are located in the jugular ganglion (somatic) and the ganglion nodosum (visceral). The proximal axonal processes of the first-order neurons in these ganglia reach the brainstem nuclei via their respective cranial nerves, where they synapse with second-order neurons in brainstem nuclei.

As afferent fibers enter the spinal cord, they segre-gate according to size, with large, myelinated fibers becoming medial, and small, unmyelinated fibers becoming lateral. Pain fibers may ascend or descend one to three spinal cord segments in Lissauer’s tract before synapsing with second-order neurons in the gray matter of the ipsilateral dorsal horn. In many instances they communicate with second-order neurons through interneurons. 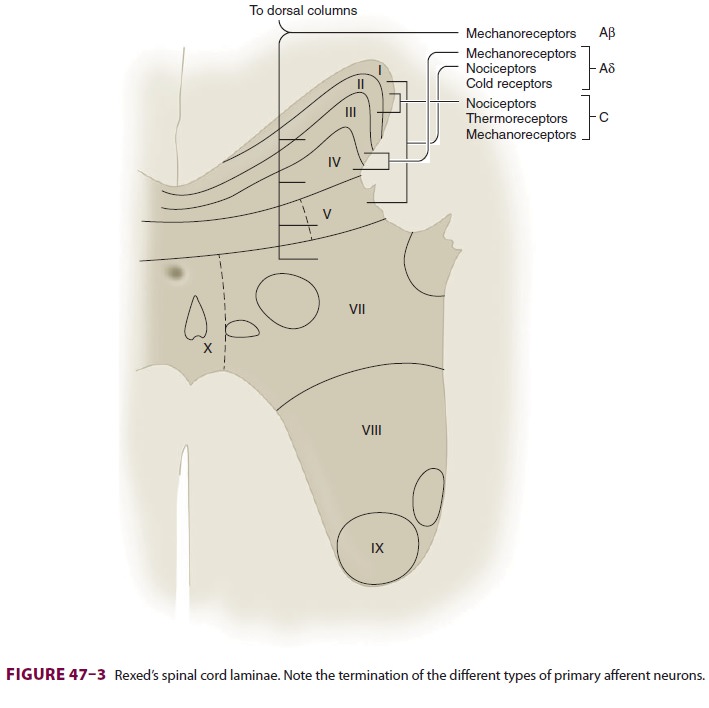 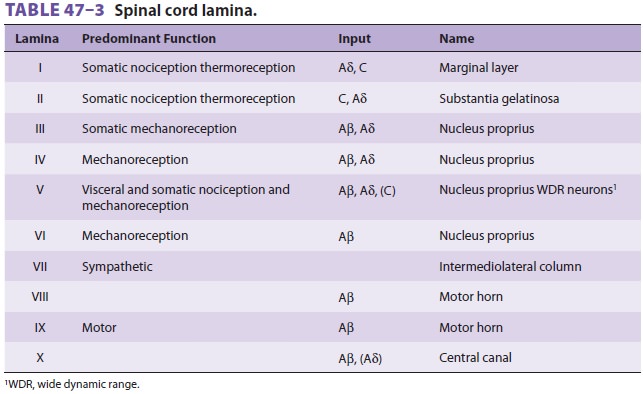 Spinal cord gray matter was divided by Rexed into 10 laminae (Figure 47–3 and Table 47–3). The first six laminae, which make up the dorsal horn, receive all afferent neural activity and represent the principal site of modulation of pain by ascending and descending neural pathways. Second-order neu-rons are either nociceptive-specific or wide dynamic range (WDR) neurons. Nociceptive-specific neu-rons serve only noxious stimuli, but WDR neurons also receive nonnoxious afferent input from Aβ, Aδ, and C fibers. Nociceptive-specific neurons are arranged somatotopically in lamina I and have discrete, somatic receptive fields; they are normally silent and respond only to high-threshold noxious stimulation, poorly encoding stimulus intensity. WDR neurons are the most prevalent cell type in the dorsal horn. Although they are found throughout the dorsal horn, WDR neurons are most abundant in lamina V. During repeated stimulation, WDR neurons characteristically increase their firing rate exponentially in a graded fashion (“wind-up”), even with the same stimulus intensity. They also have large receptive fields compared with nociceptive-specific neurons.

Most nociceptive C fibers send collaterals to, or terminate on, second-order neurons in laminae I and II, and, to a lesser extent, in lamina V. In contrast, nociceptive Aδ f ibers synapse mainly in laminae I and V, and, to a lesser degree, in lamina X. Lamina I responds primarily to noxious (nociceptive) stimuli from cutaneous and deep somatic tissues. Lamina II, also called the substantia gelatinosa, contains many interneurons and is believed to play a major role in processing and modulating nociceptive input from cutaneous nociceptors. It is also of special interest because it is believed to be a major site of action for opioids. Laminae III and IV primarily receive non-nociceptive sensory input. Laminae VIII and IX make up the anterior (motor) horn. Lamina VII is the intermediolateral column and contains the cell bodies of preganglionic sympathetic neurons.

Visceral afferents terminate primarily in lamina V, and, to a lesser extent, in lamina I. These two lami-nae represent points of central convergence between somatic and visceral inputs. Lamina V responds to both noxious and nonnoxious sensory input and receives both visceral and somatic pain afferents. The phenomenon of convergence between visceral and somatic sensory input is manifested clinically as referred pain (see Table 47–2). Compared with somatic fibers, visceral nociceptive fibers are fewer in number, more widely distributed, proportionately activate a larger number of spinal neurons, and are not organized somatotopically. 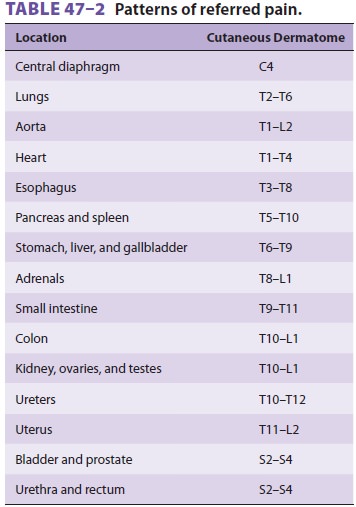 A. The Spinothalamic Tract

The axons of most second-order neurons cross the midline close to their dermatomal level of origin (at the anterior commissure) to the contralateral side of the spinal cord before they form the spinothalamic tract and send their fibers to the thalamus, the retic-ular formation, the nucleus raphe magnus, and the periaqueductal gray. The spinothalamic tract, which is classically considered the major pain pathway, lies anterolaterally in the white matter of the spinal cord (Figure 47–4). This ascending tract can be divided into a lateral and a medial tract. The lateral spino-thalamic (neospinothalamic) tract projects mainly to the ventral posterolateral nucleus of the thalamus and carries discriminative aspects of pain, such as location, intensity, and duration. The medial spino-thalamic (paleospinothalamic) tract projects to the medial thalamus and is responsible for mediating the autonomic and unpleasant emotional percep-tions of pain. Some spinothalamic fibers also proj-ect to the periaqueductal gray and thus may be an 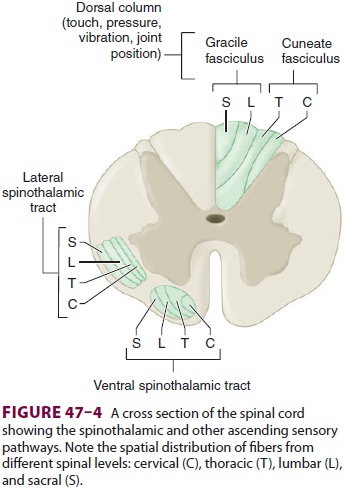 important link between the ascending and descend-ing pathways. Collateral fibers also project to the reticular activating system and the hypothalamus; these are likely responsible for the arousal response to pain.

As with epicritic sensation, pain fibers ascend dif-fusely, ipsilaterally, and contralaterally; some patients continue to perceive pain following ablation of the contralateral spinothalamic tract, and there-fore other ascending pain pathways are also impor-tant. The spinoreticular tract is thought to mediate arousal and autonomic responses to pain. The spi-nomesencephalic tract may be important in activat-ing antinociceptive, descending pathways, because it has some projections to the periaqueductal gray. The spinohypothalamic and spinotelencephalic tracts activate the hypothalamus and evoke emotional behavior. The spinocervical tract ascends uncrossed to the lateral cervical nucleus, which relays the fibers to the contralateral thalamus; this tract is likely a major alternative pathway for pain. Lastly, some fibers in the dorsal columns (which mainly carry light touch and proprioception) are responsive to pain; they ascend medially and ipsilaterally.

C. Integration with the Sympathetic and Motor Systems

Somatic and visceral afferents are fully integrated with the skeletal motor and sympathetic systems in the spinal cord, brainstem, and higher centers. Afferent dorsal horn neurons synapse both directly and indirectly with anterior horn motor neurons. These synapses are responsible for the reflex mus-cle activity—whether normal or abnormal—that is associated with pain. In a similar fashion, synapses between afferent nociceptive neurons and sympa-thetic neurons in the intermediolateral column result in reflex sympathetically mediated vasoconstriction, smooth muscle spasm, and the release of catechol-amines, both locally and from the adrenal medulla.

Third-order neurons are located in the thalamus and send fibers to somatosensory areas I and II in the postcentral gyrus of the parietal cortex and the superior wall of the sylvian fissure, respectively. Per-ception and discrete localization of pain take place in these cortical areas. Although most neurons from the lateral thalamic nuclei project to the primary somatosensory cortex, neurons from the intralami-nar and medial nuclei project to the anterior cingu-late gyrus and are likely involved in mediating the suffering and emotional components of pain.