Chronic pain may be caused by a combina-tion of peripheral, central, and psychological mechanisms.

Chronic pain may be caused by a combina-tion of peripheral, central, and psychological mechanisms. Sensitization of nociceptors plays a major role in the origin of pain associated with peripheral mechanisms, such as chronic musculo-skeletal and visceral disorders.

Neuropathic pain involves peripheral–central and central neural mechanisms that are complex and generally associated with partial or complete lesions of peripheral nerves, dorsal root ganglia, nerve roots, or more central structures (Table 47–5). Peripheral mechanisms include spontaneous dis-charges; sensitization of receptors to mechanical, thermal, and chemical stimuli; and up-regulation of adrenergic receptors. Neural inflammation may also be present. Systemic administration of local anesthetics and anticonvulsants has been shown to suppress the spontaneous firing of sensitized or traumatized neurons. This observation is supported by the efficacy of agents such as lidocaine, mexi-letine, and carbamazepine in many patients with neuropathic pain. Central mechanisms include loss of segmental inhibition, wind-up of WDR neurons, spontaneous discharges in deafferentated neurons, and reorganization of neural connections. 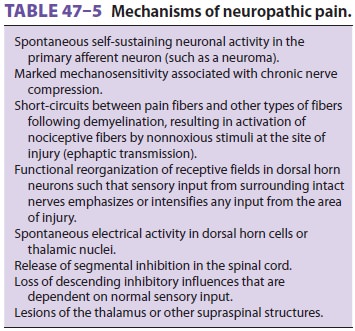 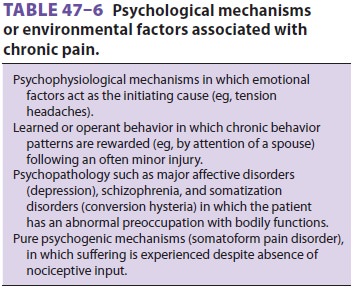 The sympathetic nervous system appears to play a major role in some patients with chronic pain. The efficacy of sympathetic nerve blocks in some of these patients supports the concept of sympa-thetically maintained pain. Painful disorders that often respond to sympathetic blocks include com-plex regional pain syndrome, deafferentation syn-dromes due to nerve avulsion or amputations, and postherpetic neuralgia. However, the simplistic theory of heightened sympathetic activity resulting in vasoconstriction, edema, and hyperalgesia fails to account for the warm and erythematous phase observed in some patients. Similarly, clinical and experimental observations do not satisfactorily sup-port the theory of ephaptic transmission between pain fibers and demyelinated sympathetic fibers.

Psychological mechanisms or environmental factors are rarely the sole mechanisms for chronic pain but are commonly seen in combination with other mechanisms (Table 47–6).