After the perimeter controls, firewall, and authentication and access controls block certain actions, some users are admitted to use a computing system.

After the perimeter controls, firewall, and authentication and access controls block certain actions, some users are admitted to use a computing system. Most of these controls are preventive: They block known bad things from happening. Many studies (for example, see [DUR99]) have shown that most computer security incidents are caused by insiders, people who would not be blocked by a firewall. And insiders require access with significant privileges to do their daily jobs. The vast majority of harm from insiders is not malicious; it is honest people making honest mistakes. Then, too, there are the potential malicious outsiders who have somehow passed the screens of firewalls and access controls. Prevention, although necessary, is not a complete computer security control; detection during an incident copes with harm that cannot be prevented in advance. Halme and Bauer [HAL95] survey the range of controls to address intrusions.

Intrusion detection systems complement these preventive controls as the next line of defense. An intrusion detection system (IDS) is a device, typically another separate computer, that monitors activity to identify malicious or suspicious events. Kemmerer and Vigna [KEM02] survey the history of IDSs. An IDS is a sensor, like a smoke detector, that raises an alarm if specific things occur. A model of an IDS is shown in Figure 7-41. The components in the figure are the four basic elements of an intrusion detection system, based on the Common Intrusion Detection Framework of [STA96]. An IDS receives raw inputs from sensors. It saves those inputs, analyzes them, and takes some controlling action. 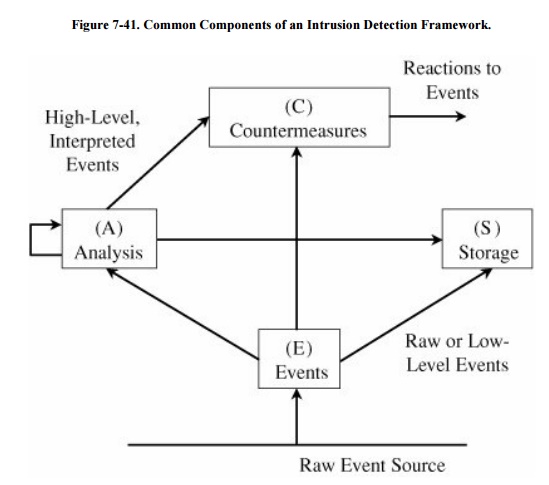 IDSs perform a variety of functions:

o    assessing the integrity of critical system and data files

o    installing and operating traps to record information about intruders

No one IDS performs all of these functions. Let us look more closely at the kinds of IDSs and their use in providing security.