A network is a collection of communicating hosts. But to understand the network and how it works, we have several key questions to ask, such as How many hosts? Communicating by what means? To answer these questions, we are helped by an understanding of several types of subclasses of networks, since they commonly combine into larger networks.

A network is a collection of communicating hosts. But to understand the network and how it works, we have several key questions to ask, such as How many hosts? Communicating by what means? To answer these questions, we are helped by an understanding of several types of subclasses of networks, since they commonly combine into larger networks. The subclasses are general notions, not definitive distinctions. But since the terms are commonly used, we present several common network subclasses that have significant security properties.

As the name implies, a local area network (or LAN) covers a small distance, typically within a single building. Usually a LAN connects several small computers, such as personal computers, as well as printers and perhaps some dedicated file storage devices. Figure 7-10 shows the arrangement of a typical LAN. The primary advantage of a LAN is the opportunity for its users to share data and programs and to share access to devices such as printers. 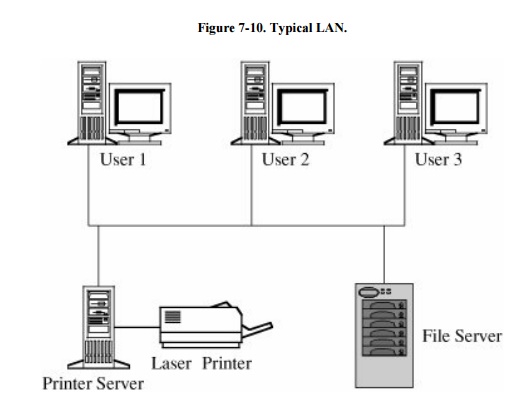 Most LANs have the following characteristics.

·      Small. Typically, fewer than 100 users share a single LAN, within a distance less than 3 kilometers, or 2 miles. More commonly, a LAN is much smaller, stretching less than 1 kilometer inside a single building.

·      Physically protected. The LAN is on the premises of a company or other organization, so malicious outsiders usually cannot readily get to the LAN equipment.

Limited scope. Many LANs support a single group, department, floor, activity, or other geographical or administrative unit. As a result, each has a narrowly scoped set of functions it performs.

A wide area network, or WAN, differs from a local area network in terms of both size or distance (as its name implies, it covers a wider geographic area than does a LAN) and control or ownership (it is more likely not to be owned or controlled by a single body). Still, there tends to be some unifying principle to a WAN. The hosts on a WAN may all belong to a company with many offices, perhaps even in different cities or countries, or they may be a cluster of independent organizations within a few miles of each other, who share the cost of networking hardware. These examples also show how WANs themselves differ. Some are under close control and maintain a high degree of logical and physical isolation (typically, these are WANs controlled by one organization), while others are only marriages of convenience. Typical characteristics of WANs are these.

·      Single control. Typically, a single organization is responsible for and controls a wide area network. Even if a network is shared by several unrelated subscribers, one organization usually determines who may join the network.

·      Covers a significant distance. A WAN generally serves a distance greater than a LAN can cover, typically from a few miles to the entire globe.

·      Physically exposed (often, but not always). Most wide area networks use publicly available communications media, which are relatively exposed. However, the fact that many subscribers share those media helps protect the privacy of any one subscriber.

Other network types include campus area networks (CANs) and metropolitan area networks (MANs). A CAN is usually under the control of a single organization, such as a university or company, and covers the adjacent buildings of one site of that organization. A MAN often covers a city, with the communication offering of one provider in that area. CANs, MANs, and WANs cover a wide range of possibilities; they loosely characterize everything between LANs and Internets, the two extremes of the networking spectrum.

Networks of networks, or internetwork networks, are sometimes called internets. An internet is a connection of two or more separate networks, in that they are separately managed and controlled. The most significant internetwork is known as the Internet, because it connects so many of the other public networks.

The Internet is, in fact, a federation of networks, loosely controlled by the Internet Society (ISOC) and the Internet Corporation for Assigned Names and Numbers (ICANN). These organizations enforce certain minimal rules of fair play to ensure that all users are treated equitably, and they support standard protocols so that users can communicate. These are the characteristics of the Internet.

Federation. Almost no general statements can be made about Internet users or even network service providers. Some may access the network through businesses or government organizations whose memberships are very restrictive, while others may obtain access simply by paying a small monthly fee.

Enormous. No one really knows how large the Internet is. Our knowledge is incomplete in part because new hosts are added daily, in part because one Internet access point can support hundreds or thousands of machines connected through that single access point, and in part because nobody has laid the basis for an accurate census. The Internet connects many thousands of networks. In 2006, according to isc.org, there were almost 400 million Internet hosts and well over 700 million users. Based on past history, we can expect the size of the Internet to double each year. Sidebar 7-1 describes the large number of outside accesses just to one pubic news web site.

Many sites record network traffic data; some publicize the data and many more use the data internally to monitor performance, manage resources, or demonstrate usage. For example, the site worldpress.org provides readers with an international view of important news: what stories are reported and how stories are covered throughout the world. During summer 2006, they averaged monthly 2 million visits by 800,000 visitors with over 3 million pages viewed.

The median length of a visit was approximately two minutes, which would correspond to a user who read several headlines and perhaps one news story. Over 60 percent of visits came from the United States, with approximately 20 percent from other countries and 20 percent of undeterminable origin. Full statistics are at http://www.worldpress.org/traffic.cfm.

But these statistics count all traffic, not just the security-relevant activity. The security company ISS (Internet Security Systems) tracks the status of actual Internet security risk. Its four-point scale goes from 1 (normal risk from random malicious attacks experienced by all site administrators) to 4 (actual or potential catastrophic security event requiring immediate defense). During a period from April to June 2002, ISS reported 56 days at level 1, 22 at level 2, and 7 at level 3 [ISS02].

Heterogeneous. Probably at least one of every kind of commercially available hardware and software is connected to the Internet. Unix is popular as the operating system at the Internet connection point, although most other multiuser operating systems could support access.

Physically and logically exposed. Since there is no global access control, practically any attacker can access the Internet and, because of its complex connectivity, reach practically any resource on the net.