As with so many of the areas we have studied, planning can be the strongest control. In particular, when we build or modify computer-based systems, we can give some thought to their overall architecture and plan to "build in" security as one of the key constructs. Similarly, the architecture or design of a network can have a significant effect on its security.

Throughout this book we have discussed good principles of system analysis, design, implementation, and maintenance. Chapter 3, in particular, presented techniques that have been developed by the software engineering community to improve requirements, design, and code quality. Concepts from the work of the early trusted operating systems projects (presented in Chapter 5) have natural implications for networks as well. And assurance, also discussed in Chapter 5, relates to networked systems. In general, the Open Web Applications project [OWA02, OWA05] has documented many of the techniques people can use to develop secure web applications. Thus, having addressed secure programming from several perspectives already, we do not belabor the points now.

As with so many of the areas we have studied, planning can be the strongest control. In particular, when we build or modify computer-based systems, we can give some thought to their overall architecture and plan to "build in" security as one of the key constructs. Similarly, the architecture or design of a network can have a significant effect on its security.

Just as segmentation was a powerful security control in operating systems, it can limit the potential for harm in a network in two important ways: Segmentation reduces the number of threats, and it limits the amount of damage a single vulnerability can allow.

Assume your network implements electronic commerce for users of the Internet. The fundamental parts of your network may be

·      application code, to present your goods and services for purchase

·      a database of goods, and perhaps an accompanying inventory to the count of stock on hand and being requested from suppliers

If all these activities were to run on one machine, your network would be in trouble: Any compromise or failure of that machine would destroy your entire commerce capability.

A more secure design uses multiple segments, as shown in Figure 7-19. Suppose one piece of hardware is to be a web server box exposed to access by the general public. To reduce the risk of attack from outside the system, that box should not also have other, more sensitive, functions on it, such as user authentication or access to a sensitive data repository. Separate segments and serverscorresponding to the principles of least privilege and encapsulationreduce the potential harm should any subsystem be compromised. 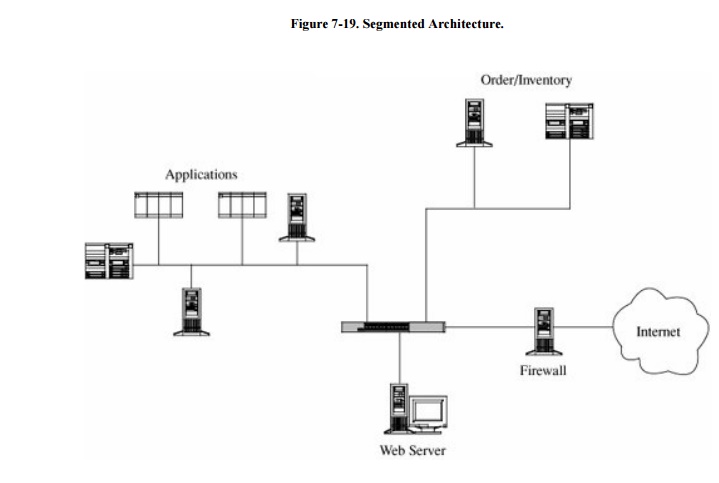 Another key architectural control is redundancy: allowing a function to be performed on more than one node, to avoid "putting all the eggs in one basket." For example, the design of Figure 7-19 has only one web server; lose it and all connectivity is lost. A better design would have two servers, using what is called failover mode. In failover mode the servers communicate with each other periodically, each determining if the other is still active. If one fails, the other takes over processing for both of them. Although performance is cut approximately in half when a failure occurs, at least some processing is being done.

Ideally, the architecture should make the network immune to failure. In fact, the architecture should at least make sure that the system tolerates failure in an acceptable way (such as slowing down but not stopping processing, or recovering and restarting incomplete transactions). One way to evaluate the network architecture's tolerance of failure is to look for single points of failure. That is, we should ask if there is a single point in the network that, if it were to fail, could deny access to all or a significant part of the network. So, for example, a single database in one location is vulnerable to all the failures that could affect that location. Good network design eliminates single points of failure. Distributing the databaseplacing copies of it on different network segments, perhaps even in different physical locationscan reduce the risk of serious harm from a failure at any one point. There is often substantial overhead in implementing such a design; for example, the independent databases must be synchronized. But usually we can deal with the failure-tolerant features more easily than with the harm caused by a failed single link.

Architecture plays a role in implementing many other controls. We point out architectural features as we introduce other controls throughout the remainder of this chapter.

Mobile code and hostile agents are potential methods of attack, as described earlier in this chapter. However, they can also be forces for good. Good agents might look for unsecured wireless access, software vulnerabilities, or embedded malicious code. Schneider and Zhou [SCH05] investigate distributed trust, through a corps of communicating, state-sharing agents. The idea is straightforward: Just as with soldiers, you know some agents will be stopped and others will be subverted by the enemy, but some agents will remain intact. The corps can recover from Byzantine failures [LAM82]. Schneider and Zhou propose a design in which no one agent is critical to the overall success but the overall group can be trusted.