What Makes a Network Vulnerable? An isolated home user or a stand-alone office with a few employees is an unlikely target for many attacks. But add a network to the mix and the risk rises sharply.

Up to now, we have reviewed network concepts with very little discussion of their security implications. But our earlier discussion of threats and vulnerabilities, as well as outside articles and your own experiences, probably have you thinking about the many possible attacks against networks. This section describes some of the threats you have already hypothesized and perhaps presents you with some new ones. But the general thrust is the same: threats aimed to compromise confidentiality, integrity, or availability, applied against data, software, and hardware by nature, accidents, nonmalicious humans, and malicious attackers.

What Makes a Network Vulnerable?

An isolated home user or a stand-alone office with a few employees is an unlikely target for many attacks. But add a network to the mix and the risk rises sharply. Consider how a network differs from a stand-alone environment:

·      Anonymity. An attacker can mount an attack from thousands of miles away and never come into direct contact with the system, its administrators, or users. The potential attacker is thus safe behind an electronic shield. The attack can be passed through many other hosts in an effort to disguise the attack's origin. And computer-to-computer authentication is not the same for computers as it is for humans; as illustrated by Sidebar 7-2, secure distributed authentication requires thought and attention to detail.

·      Many points of attackboth targets and origins. A simple computing system is a self-contained unit. Access controls on one machine preserve the confidentiality of data on that processor. However, when a file is stored in a network host remote from the user, the data or the file itself may pass through many hosts to get to the user. One host's administrator may enforce rigorous security policies, but that administrator has no control over other hosts in the network. Thus, the user must depend on the access control mechanisms in each of these systems. An attack can come from any host to any host, so that a large network offers many points of vulnerability.

·      Sharing. Because networks enable resource and workload sharing, more users have the potential to access networked systems than on single computers. Perhaps worse, access is afforded to more systems, so that access controls for single systems may be inadequate in networks.

·      Complexity of system. In Chapter 4 we saw that an operating system is a complicated piece of software. Reliable security is difficult, if not impossible, on a large operating system, especially one not designed specifically for security. A network combines two or more possibly dissimilar operating systems. Therefore, a network operating/control system is likely to be more complex than an operating system for a single computing system. Furthermore, the ordinary desktop computer today has greater computing power than did many office computers in the last two decades. The attacker can use this power to advantage by causing the victim's computer to perform part of the attack's computation. And because an average computer is so powerful, most users do not know what their computers are really doing at any moment: What processes are active in the background while you are playing Invaders from Mars? This complexity diminishes confidence in the network's security.

This approach is more flexible and robust than the primary-secondary approach because it allows any controller to take chargeespecially useful if one or more controllers have failed or are out of service for some reason. But the multimaster approach introduces a new problem. Because any domain controller can initiate changes to the authentication database, any hacker able to dominate a domain controller can alter the authentication database. And, what's worse, the changes are then replicated throughout the remaining forest. Theoretically, the hacker could access anything in the forest that relies on Windows 2000 for authentication.

When we think of attackers, we usually think of threats from outside the system. But in fact the multimaster approach can tempt people inside the system, too. A domain administrator in any domain in the forest can access domain controllers within that domain. Thanks to multimaster, the domain administrator can also modify the authentication database to access anything else in the forest.

For this reason, system administrators must consider how they define domains and their separation in a network. Otherwise, we can conjure up scary but possible scenarios. For instance, suppose one domain administrator is a bad apple. She works out a way to modify the authentication database to make herself an administrator for the entire forest. Then she can access any data in the forest, turn on services for some users, and turn off services for other users.

Unknown perimeter. A network's expandability also implies uncertainty about the network boundary. One host may be a node on two different networks, so resources on one network are accessible to the users of the other network as well. Although wide accessibility is an advantage, this unknown or uncontrolled group of possibly malicious users is a security disadvantage. A similar problem occurs when new hosts can be added to the network. Every network node must be able to react to the possible presence of new, untrustable hosts. Figure 7-11 points out the problems in defining the boundaries of a network. Notice, for example, that a user on a host in network D may be unaware of the potential connections from users of networks A and B. And the host in the middle of networks A and B in fact belongs to A, B, C, and E. If there are different security rules for these networks, to what rules is that host subject? 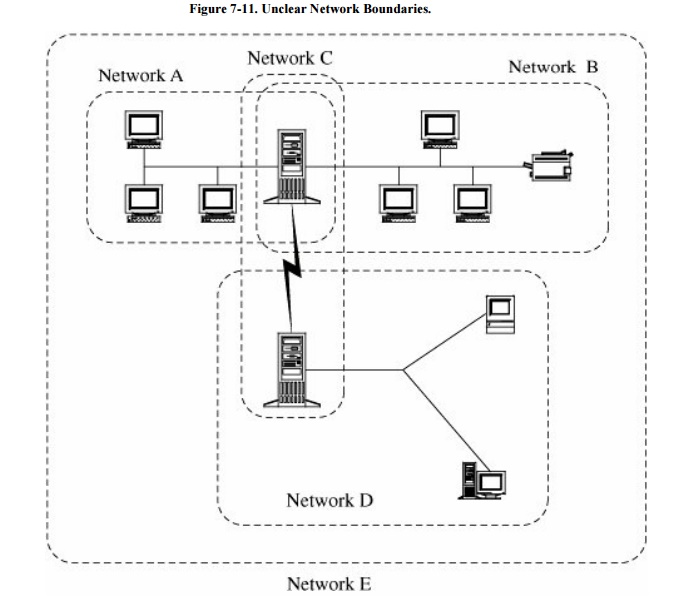 Unknown path. Figure 7-12 illustrates that there may be many paths from one host to another. Suppose that a user on host A1 wants to send a message to a user on host B3. That message might be routed through hosts C or D before arriving at host B3. Host C may provide acceptable security, but not D. Network users seldom have control over the routing of their messages. 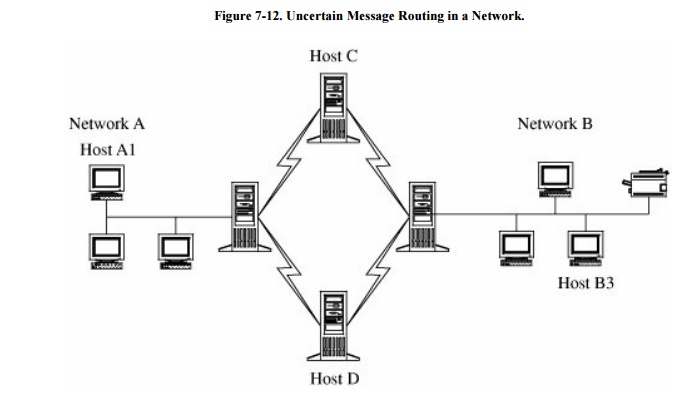