How Much Denial-of-Service Activity Is There?

The denial-of -service attacks we have listed are powerful by themselves, and Sidebar 7-7 shows us that many are launched. But an attacker can construct a two-stage attack that multiplies the effect many times. This multiplicative effect gives power to distributed denial of service.

To perpetrate a distributed denial-of-service (or DDoS) attack, an attacker does two things, as illustrated in Figure 7 -18. In the first stage, the attacker uses any convenient attack (such as exploiting a buffer overflow or tricking the victim to open and install unknown code from an e-mail attachment) to plant a Trojan horse on a target machine. That Trojan horse does not necessarily cause any harm to the target machine, so it may not be noticed. The Trojan horse file may be named for a popular editor or utility, bound to a standard operating system service, or entered into the list of processes (daemons) activated at startup. No matter how it is situated within the system, it will probably not attract any attention. 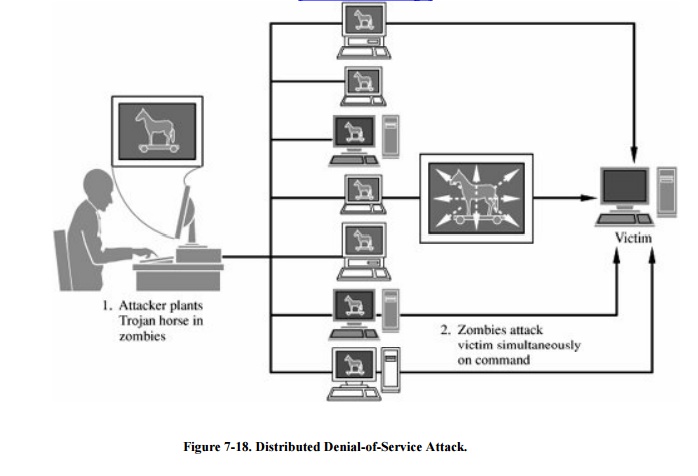 The attacker repeats this process with many targets. Each of these target systems then becomes what is known as a zombie. The target systems carry out their normal work, unaware of the resident zombie.

Sidebar 7-7: How Much Denial-of-Service Activity Is There?

Researchers at the University of California, San Diego (UCSD) studied the amount of denial-of-service activity on the Internet [UCS01]. Because many DOS attacks use a fictitious return address, the researchers asserted that traffic to nonexistent addresses was indicative of the amount of denial-of-service attacking. They monitored a large, unused address space on the Internet for a period of three weeks. They found

·         Syn floods likely accounted for more than half of the attacks.

Steve Gibson of Gibson Research Corporation (GRC) experienced several denial-of-service attacks in mid-2001. He collected data for his own forensic purposes [GIB01]. The first attack lasted 17 hours, at which point he was able to reconfigure the router connecting him to the Internet so as to block the attack. During those 17 hours he found his site was attacked by 474 Windows-based PCs. A later attack lasted 6.5 hours before it stopped by itself. These attacks were later found to have been launched by a 13-year old from Kenosha, Wisconsin.

At some point the attacker chooses a victim and sends a signal to all the zombies to launch the attack. Then, instead of the victim's trying to defend against one denial-of-service attack from one malicious host, the victim must try to counter n attacks from the n zombies all acting at once. Not all of the zombies need to use the same attack; for instance, some could use smurf attacks and others, could use syn floods to address different potential weaknesses.

According to the U.S. Computer Emergency Response Team (CERT) [HOU01a] , scanning to find a vulnerable host (potential zombie) is now being included in combination tools; a single tool now identifies its zombie, installs the Trojan horse, and activates the zombie to wait for an attack signal. Recent target (zombie) selection has been largely random, meaning that attackers do not seem to care which zombies they infect. This revelation is actually bad news, because it means that no organization or accessible host is safe from attack. Perhaps because they are so numerous and because their users are assumed to be less knowledgeable about computer management and protection, Windows-based machines are becoming more popular targets for attack than other systems. Most frightening is the CERT finding that the time is shrinking between discovery of a vulnerability and its widespread exploitation.