Communication is enabled by several kinds of media. We can choose among several types, such as along copper wires or optical fiber or through the air, as with cellular phones. Let us look at each type in turn.

Communication is enabled by several kinds of media. We can choose among several types, such as along copper wires or optical fiber or through the air, as with cellular phones. Let us look at each type in turn.

Because much of our computer communication has historically been done over telephone lines, the most common network communication medium today is wire. Inside our homes and offices, we use a pair of insulated copper wires, called a twisted pair or unshielded twisted pair (UTP). Copper has good transmission properties at a relatively low cost. The bandwidth of UTP is limited to under 10 megabits per second (Mbps), so engineers cannot transmit a large number of communications simultaneously on a single line. Moreover, the signal strength degrades as it travels through the copper wire, and it cannot travel long distances without a boost. Thus, for many networks, line lengths are limited to approximately 300 feet. Single twisted pair service is most often used locally, within a building or up to a local communications drop (that is, the point where the home or office service is connected to the larger network, such as the commercial telephone system). Although regular copper wire can transmit signals, the twisting reduces crossover (interference and signal transfer) between adjacent wires.

Another choice for network communication is coaxial (coax) cable, the kind used for cable television. Coax cable is constructed with a single wire surrounded by an insulation jacket. The jacket is itself surrounded by a braided or spiral-wound wire. The inner wire carries the signal, and the outer braid acts as a ground. The most widely used computer communication coax cable is Ethernet, carrying up to 100 Mbps over distances of up to 1500 feet.

Coax cable also suffers from degradation of signal quality over distance. Repeaters (for digital signals) or amplifiers (for analog signals) can be spaced periodically along the cable to pick up the signal, amplify it, remove spurious signals called "noise," and retransmit it.

A newer form of cable is made of very thin strands of glass. Instead of carrying electrical energy, these fibers carry pulses of light. The bandwidth of optical fiber is up to 1000 Mbps, and the signal degrades less over fiber than over wire or coax; the fiber is good for a run of approximately 2.5 miles. Optical fiber involves less interference, less crossover between adjacent media, lower cost, and less weight than copper. Thus, optical fiber is generally a much better transmission medium than copper. Consequently, as copper ages, it is being replaced by optical fiber in most communication systems. In particular, most long distance communication lines are now fiber.

Radio signals can also carry communications. Similar to pagers, wireless microphones, garage door openers, and portable telephones, wireless radio can be used in networks, following a protocol developed for short-range telecommunications, designated the 802.11 family of standards. The wireless medium is used for short distances; it is especially useful for networks in which the nodes are physically close together, such as in an office building or at home. Many 802.11 devices are becoming available for home and office wireless networks.

Microwave is a form of radio transmission especially well suited for outdoor communication. Microwave has a channel capacity similar to coax cable; that is, it carries similar amounts of data. Its principal advantage is that the signal is strong from point of transmission to point of receipt. Therefore, microwave signals do not need to be regenerated with repeaters, as do signals on cable.

Infrared communication carries signals for short distances (up to 9 miles) and also requires a clear line of sight. Because it does not require cabling, it is convenient for portable objects, such as laptop computers and connections to peripherals. An infrared signal is difficult to intercept because it is a point-to-point signal. However, it is subject to "in the middle" attacks in which the interceptor functions like a repeater, receiving the signal, extracting any desired data, and retransmitting to the original destination the original signal or a modified version. Because of line-of-sight requirements and limited distance, infrared is typically used in a protected space, such as an office, in which in-the-middle attacks would be difficult to conceal. 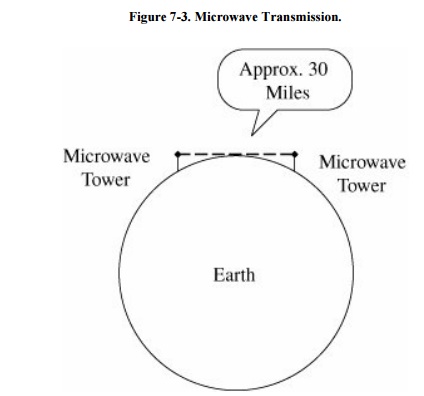 Many communications, such as international telephone calls, must travel around the earth. In the early days of telephone technology, telephone companies ran huge cables along the ocean's bottom, enabling calls to travel from one continent to another. Today, we have other alternatives. The communication companies place satellites in orbits that are synchronized with the rotation of the earth (called geosynchronous orbits), so the satellite appears to hover in a fixed position 22,300 miles above the earth. Although the satellite can be expensive to launch, once in space it is essentially maintenance free. Furthermore, the quality of a satellite communication link is often better than an earthbound wire cable.

Satellites act as naïve transponders: Whatever they receive they broadcast out again. Thus, satellites are really sophisticated receivers, in that their sole function is to receive and repeat signals. From the user's point of view, the signal essentially "bounces" off the satellite and back to earth. For example, a signal from North America travels 22,300 miles into the sky and the same distance back to a point in Europe. The process of bouncing a signal off a satellite is shown in Figure 7-4.

We can project a signal to a satellite with reasonable accuracy, but the satellite is not expected to have the same level of accuracy when it sends the signal back to earth. To reduce complexity and eliminate beam focusing, satellites typically spread their transmissions over a very wide area. A rather narrow angle of dispersion from the satellite's transmitter produces a fairly broad pattern (called the footprint) on the surface of the earth because of the 22,300-mile distance from the satellite to earth. Thus, a typical satellite transmission can be received over a path several hundred miles wide; some cover the width of the entire continental United States in a single transmission. For some applications, such as satellite television, a broad footprint is desirable. But for secure communications, the smaller the footprint, the less the risk of interception. 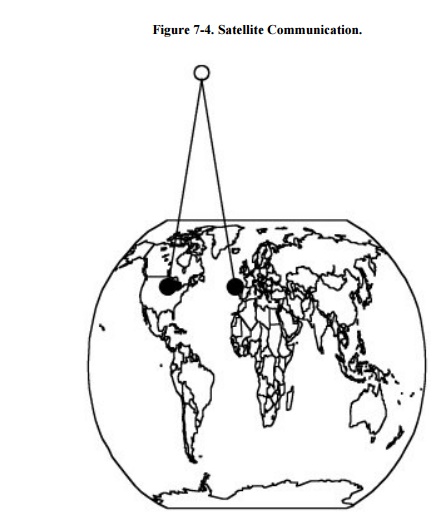