Intrusion detection devices can be network based or host based. A etwork -based IDS is a stand-alone device attached to the network monitor traffic throughout that network; a host-based IDS runs on to a single workstation or client or host, to protect that one host.

Early intrusion detection systems (for example, [DEN87b, LUN90a, FOX90 , LIE89]) worked after the fact, by reviewing logs of system activity to spot potential misuses that had occurred. The administrator could review the results of the IDS to find and fix weaknesses in the system. Now, however, intrusion detection systems operate in real time (or near real time), watching activity and raising alarms in time for the administrator to take protective action.

A simple signature for a known attack type might describe a series of TCP SYN packets sent to many different ports in succession and at times close to one another, as would be the case for a port scan. An intrusion detection system would probably find nothing unusual in the first SYN, say, to port 80, and then another (from the same source address) to port 25. But as more and more ports receive SYN packets, especially ports that are not open, this pattern reflects a possible port scan. Similarly, some implementations of the protocol stack fail if they receive an ICMP packet with a data length of 65535 bytes, so such a packet would be a pattern for which to watch.

The problem with signature-based detection is the signatures themselves. An attacker will try to modify a basic attack in such a way that it will not match the known signature of that attack. For example, the attacker may convert lowercase to uppercase letters or convert a symbol such as "blank space" to its character code equivalent %20. The IDS must necessarily work from a canonical form of the data stream in order to recognize that %20 matches a pattern with a blank space. The attacker may insert malformed packets that the IDS will see, to intentionally cause a pattern mismatch; the protocol handler stack will discard the packets because of the malformation. Each of these variations could be detected by an IDS, but more signatures require additional work for the IDS, which reduces performance.

Of course, signature-based IDSs cannot detect a new attack for which a signature is not yet installed in the database. Every attack type starts as a new pattern at some time, and the IDS is helpless to warn of its existence.

Signature-based intrusion detection systems tend to use statistical analysis. This approach uses statistical tools both to obtain sample measurements of key indicators (such as amount of external activity, number of active processes, number of transactions) and to determine whether the collected measurements fit the predetermined attack signatures.

Ideally, signatures should match every instance of an attack, match subtle variations of the attack, but not match traffic that is not part of an attack. However, this goal is grand but unreachable.

Because signatures are limited to specific, known attack patterns, another form of intrusion detection becomes useful. Instead of looking for matches, heuristic intrusion detection looks for behavior that is out of the ordinary. The original work in this area (for example, [TEN90]) focused on the individual, trying to find characteristics of that person that might be helpful in understanding normal and abnormal behavior. For example, one user might always start the day by reading e-mail, write many documents using a word processor, and occasionally back up files. These actions would be normal. This user does not seem to use many administrator utilities. If that person tried to access sensitive system management utilities, this new behavior might be a clue that someone else was acting under the user's identity.

If we think of a compromised system in use, it starts clean, with no intrusion, and it ends dirty, fully compromised. There may be no point in the trace of use in which the system changed from clean to dirty; it was more likely that little dirty events occurred, occasionally at first and then increasing as the system became more deeply compromised. Any one of those events might be acceptable by itself, but the accumulation of them and the order and speed at which they occurred could have been signals that something unacceptable was happening. The inference engine of an intrusion detection system performs continuous analysis of the system, raising an alert when the system's dirtiness exceeds a threshold.

Inference engines work in two ways. Some, called state-based intrusion detection systems, see the system going through changes of overall state or configuration. They try to detect when the system has veered into unsafe modes. Others try to map current activity onto a model of unacceptable activity and raise an alarm when the activity resembles the model. These are called model-based intrusion detection systems. This approach has been extended to networks in [MUK94]. Later work (for example, [ FOR96, LIN99]) sought to build a dynamic model of behavior, to accommodate variation and evolution in a person's actions over time. The technique compares real activity with a known representation of normality.

Alternatively, intrusion detection can work from a model of known bad activity. For example, except for a few utilities (login, change password, create user), any other attempt to access a password file is suspect. This form of intrusion detection is known as misuse intrusion detection. In this work, the real activity is compared against a known suspicious area.

All heuristic intrusion detection activity is classified in one of three categories: good/benign, suspicious, or unknown. Over time, specific kinds of actions can move from one of these categories to another, corresponding to the IDS's learning whether certain actions are acceptable or not.

As with pattern-matching, heuristic intrusion detection is limited by the amount of information the system has seen (to classify actions into the right category) and how well the current actions fit into one of these categories.

An IDS is a network device (or, in the case of a host-based IDS, a program running on a network device). Any network device is potentially vulnerable to network attacks. How useful would an IDS be if it itself were deluged with a denial-of-service attack? If an attacker succeeded in logging in to a system within the protected network, wouldn't trying to disable the IDS be the next step?

To counter those problems, most IDSs run in stealth mode, whereby an IDS has two network interfaces: one for the network (or network segment) being monitored and the other to generate alerts and perhaps other administrative needs. The IDS uses the monitored interface as input only; it never sends packets out through that interface. Often, the interface is configured so that the device has no published address through the monitored interface; that is, a router cannot route anything to that address directly, because the router does not know such a device exists. It is the perfect passive wiretap. If the IDS needs to generate an alert, it uses only the alarm interface on a completely separate control network. Such an architecture is shown in Figure 7-42. 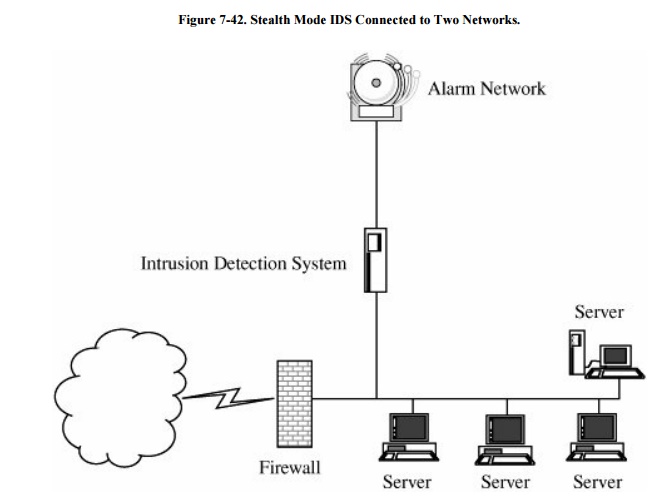 Some security engineers consider other devices to be IDSs as well. For instance, to detect unacceptable code modification, programs can compare the active version of a software code with a saved version of a digest of that code. The tripwire program [KIM98] is the most well known software (or static data) comparison program. You run tripwire on a new system, and it generates a hash value for each file; then you save these hash values in a secure place (offline, so that no intruder can modify them while modifying a system file). If you later suspect your system may have been compromised, you rerun tripwire, providing it the saved hash values. It recomputes the hash values and reports any mismatches, which would indicate files that were changed.

System vulnerability scanners, such as ISS Scanner or Nessus, can be run against a network. They check for known vulnerabilities and report flaws found.

As we have seen, a honeypot is a faux environment intended to lure an attacker. It can be considered an IDS, in the sense that the honeypot may record an intruder's actions and even attempt to trace who the attacker is from actions, packet data, or connections.