Beryllium is rare and radium is the rarest of all comprising only 10 % of igneous rocks. 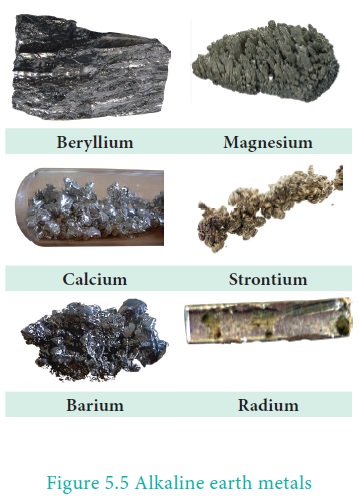 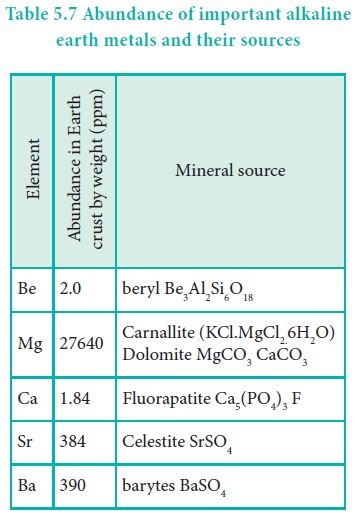 Beryllium is rare and radium is the rarest of all comprising only 10 % of igneous rocks. Magnesium and calcium are very common in the earth’s crust, with calcium the fifth-most-abundant element, and magnesium the eighth. Magnesium and calcium are found in many rocks and minerals: magnesium in carnallite, magnesite, dolomite and calcium in chalk, limestone, gypsum. Most strontium is found in the minerals celestite and strontianite. Barium is slightly less common, much of it in the mineral barite. Radium, being a decay product of uranium, is found in all uranium-bearing ores. 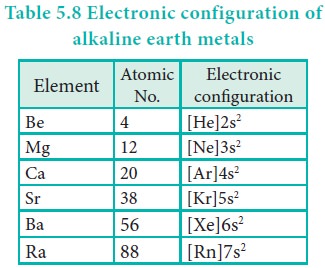 The atomic and ionic radii of alkaline earth metals are smaller than the corresponding members of the alkali metals. This is due to the fact the Group 2 elements having a higher nuclear charge that allows electrons to be attracted more strongly towards the nucleus. On moving down the group, the radii increases due to gradual increase in the number of the shells and the screening effect. 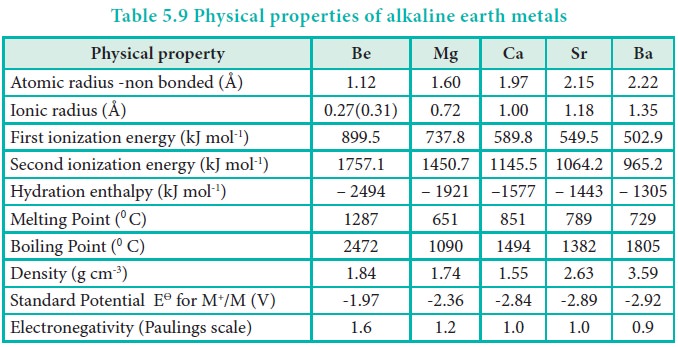 The group 2 elements have two electrons in their valence shell and by losing these electrons, they acquire the stable noble gas configuration. So these elements exhibit +2 oxidation state in their compounds.

Due to a fairly large size of the atoms, alkaline earth metals have low ionisation enthalpies when compared to ‘p’ block elements. Down the group the ionisation enthalpy decreases as atomic size increases. This is due to the addition of new shells as well as increase in the magnitude of the screening effect of inner shell electrons. Members of group 2 have higher ionization enthalpy values than group 1 because of their smaller size, with electrons being more attracted towards the nucleus of the atoms. Correspondingly they are less electropositive than alkali metals. 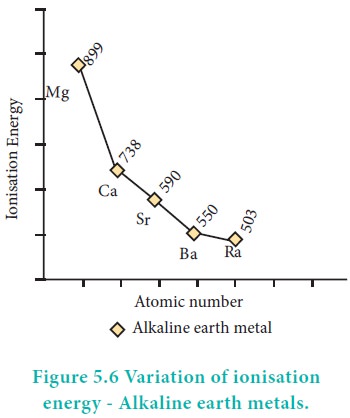 Like alkali metal ions, the hydration enthalpies of alkaline earth metal ions also decrease with increase in ionic size down the group.

In alkaline earth metals the electronegativity values decrease as we go down the group as seen in the alkali metals.

When the alkaline earth metal salts moistened with concentrated hydrochloric acid are heated on a platinum wire in a flame, they show characteristic coloured flame as shown below. 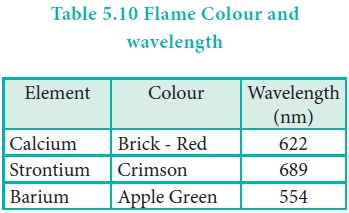 The heat in the flame excites the valence electron to a higher energy level. when it drops back to its actual energy level, the excess energy is emitted as light, whose wavelength is in the visible region as shown in the above table.