Disorders of the Adrenal Cortex

Adrenal glands each weigh about 5 g and are found on the upper surfaces of the kidneys. They consist of an outer cortex and an inner medulla.

DISORDERS OF THE ADRENAL CORTEX

Adrenal glands each weigh about 5 g and are found on the upper surfaces of the kidneys. They consist of an outer cortex and an inner medulla. The cortex consists of three layers: the zona glomerulosa, zona fasciculata and zona reticularis (Figure 7.27). The adrenal cortex is essential for life since it produces three groups of steroid hormones. The glucocorticoids, such as cortisol, and adrenal androgens, for example testosterone, are produced by the zona reticularis and zona fasciculata and mineralocorticoids, such as aldosterone, from the zona glomerulosa. Adrenal cortex cells have many low density lipoprotein receptors on their surfaces enabling them to take up precursor cholesterol rapidly from the plasma. 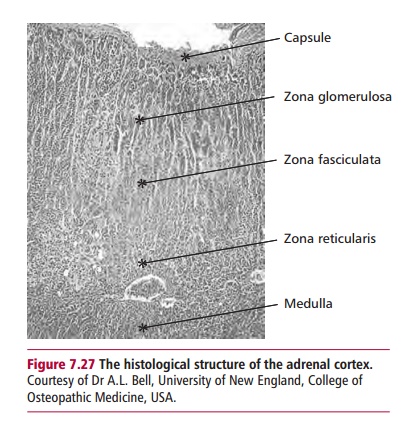 Cortisol (Figure 7.28 (A)) is released in response to adrenocorticotrophic hormone (ACTH) from the anterior pituitary that, in turn, is controlled by the release of corticotrophin releasing factor (CRF) from the hypothalamus. Cortisol exerts a negative feedback effect on the anterior pituitary and hypothalamus (Figure 7.28 (B)). The secretion of cortisol shows a diurnal variation: highest in the morning, lowest at night. Cortisol stimulates an increase in protein catabolism, hepatic glycogenolysis and gluconeogenesis and a redistribution of adipose tissue but suppresses inflammation. About 90% of blood cortisol is bound to a cortisol binding globulin called transcortin whilst the remaining 10% is free. 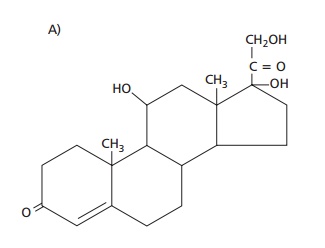 The major mineralocorticoid, aldosterone (Figure 7.29 (A)), is released in response to hypotension, Na+ depletion or hyperkalemia . A group of cells in the kidneys called juxtaglomerular cells detect a fall in blood pressure and secrete renin which circulates in the blood and catalyzes the conversion of the plasma protein angiotensinogen to angiotensin I. A converting enzyme in the lungs converts angiotensin I to angiotensin II that stimulates the release of aldosterone from the adrenal cortex and ADH from the posterior pituitary (Figure 7.29 (B)). Aldosterone stimulates the retention of Na+ in exchange for K+ and H+ in the kidney tubules increasing the osmolality of the ECF and the retention of water raising the blood pressure or the ECF volume back to 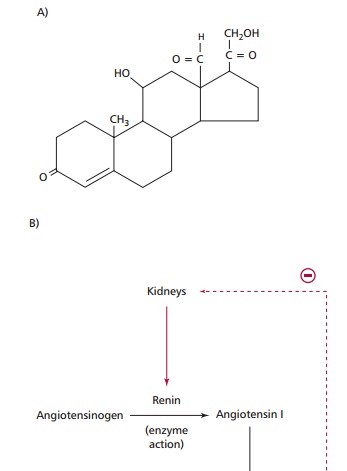 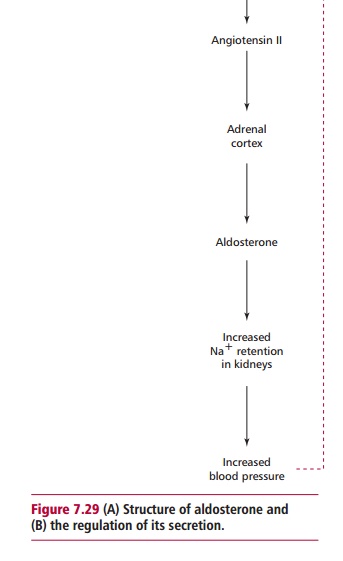 physiological values. Angiotensin II also stimulates thirst that helps to increase blood pressure. The adrenal cortex secretes androgens, such as testosterone, dehydroepiandrosterone sulfate (DHEAS) and androstenedione. Testosterone is the hormone that stimulates the growth and development of the male characteristics.