Endocrine disorders arise because a disruption to the endocrine system causes decreased (hypofunction) or increased (hyperfunction) hormonal activity or resistance to hormone action.

Endocrine disorders arise because a disruption to the endocrine system causes decreased (hypofunction) or increased (hyperfunction) hormonal activity or resistance to hormone action. There may be defects in synthesis of the hormone due to an inherited deficiency of an enzyme required for its synthesis. Inappropriate stimuli may impair the release of the hormone or certain drugs may stimulate hormone release. Defects in the negative feedback mechanism may cause abnormal hormone secretion. Faulty inactivation or excretion of hormones in liver or renal diseases respectively can increase hormone levels. Excessive hormone secretion can occur ectopically from a nonendocrine source, such as a tumor. Even if correctly synthesized and released, the target tissues may not recognize the hormone because of a lack of receptors or because the receptors themselves are nonfunctional. Disorders will also occur if the target cells do recognize the hormone but there is a defect in the secondary messenger system responsible for converting the hormonal signal to a physiological action.

In some autoimmune diseases , antibodies are produced that stimulate or destroy endocrine glands, as in Graveâ€™s disease and autoimmune thyroiditis respectively. The various causes underlying endocrine disorders are summarized in Figure 7.11. A considerable number of endocrine disorders have been described including disorders associated with the pituitary, thyroid, pancreas, adrenal glands and the reproductive systems. 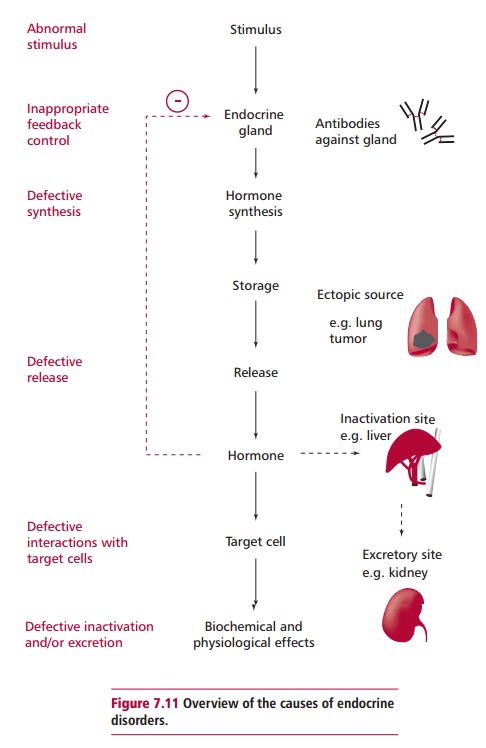