Bank switching simply involves having several banks of memory with the same address locations. At any one time, only one bank of memory is enabled and accessible by the microproc-essor.

Bank switching simply involves having several banks of memory with the same address locations. At any one time, only one bank of memory is enabled and accessible by the microproc-essor. Bank selection is made by driving the required bank select line. These lines come from either an external parallel port or latch whose register(s) appear as a bank switching control register within the processors’s normal address map.

In the example, the binary value 1000 has been loaded into the bank selection register. This asserts the select line for bank ‘a’ which is subsequently accessed by the processor. Special VLSI (very large scale integration) parts were even developed which provided large number of banks and additional control facilities: the Motorola MC6883 SAM is an example used in the Dragon MC6809-based home computer from the early 1980s. 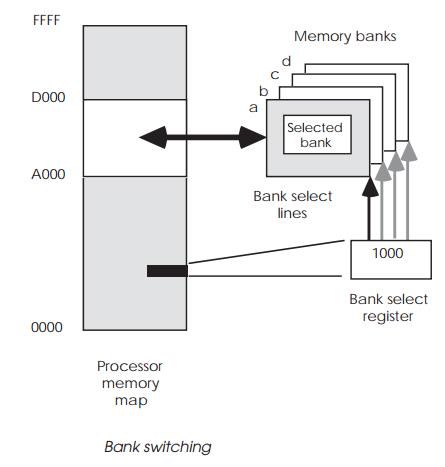 Program overlays are similar to bank switching except that some form of mass storage is used to contain the different over-lays. If a particular subroutine is not available, the software stores part of its memory as a file on disk and loads a new program section from disk into its place. Several hundred kilobytes of program, divided into smaller sections, can be made to overlay a single block of memory. 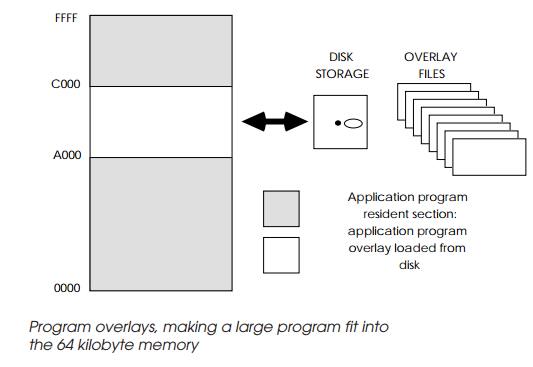 This whole approach requires careful design so that the system integrity is ensured. Data passing between the overlays can be a particular problem which requires careful design. Typi-cally, data is passed and stored either on the processor stack or in reserved memory which is locked in and does not play any part in the overlay process, i.e. it is resident all the time.