Why Do We Dream ?

In Western cultures, dreams have historically been considered prophetic; across the centuries, dream analysis has been a standard practice among fortune-tellers.

WHY DO WE DREAM ?

In Western cultures, dreams have historically been considered prophetic; across the centuries, dream analysis has been a standard practice among fortune-tellers. Moreover, people around the world regard their dreams as meaningful. In one study, people in countries as diverse as the United States, India, and South Korea said they thought dreams “reveal hidden truths” by allowing “emotions buried in the unconscious” to come to the surface (Figure 6.19; Morewedge & Norton, 2009).

Apparently, then, people are ready to endorse a proposal similar to the one suggested by Sigmund Freud in his book, The Interpretation of Dreams (1900). Freud argued that we all harbor a host of primitive and forbidden wishes, but we protect ourselves by keeping these wishes out of our conscious thoughts. In dreams, however, our self-censorship is relaxed just a bit, allowing these impulses to break through into our awareness. Even in sleep, though, some of our efforts at self-protection continue; so the forbidden impulses can enter our dreams only in a disguised form. In Freud’s view, therefore, the characters that we observe in our dreams, and the actions we witness, are merely the manifest content of the dream—the content we’re able to experience directly. The real meaning of the dream, in contrast, lies in the dream’s latent content—the actual wishes and desires that are being expressed (symbolically) through the manifest content.

Is this proposal correct? At the most general level, Freud is suggesting that dreams usually reflect the sleeper’s ongoing emotional concerns; and he was surely correct about this broad point. Thus if you’ve narrowly avoided a car crash, you’re likely to dream about collisions and other accidents; if you’re worried about an upcoming exam, you may well end up dreaming about exams or other forms of evaluation. Indeed, in the weeks following the September 11, 2001, attacks, many residents of New York City reported dreams about terrorist attacks (Galea et al., 2002).

There is, however, little evidence to support Freud’s more ambitious claim that dream content should be understood in terms of thinly disguised wishes (S. Fisher & Greenberg, 1977, 1996). As one large concern, Freud’s own evidence was based on his interpretation of dreams, and it’s difficult (some would say impossible) to know if theinterpretations were correct or not. There’s surely nothing inevitable about Freud’s interpretations; indeed, some of his followers offered very different interpretations of the same dreams that Freud himself had analyzed. This highlights just how uncertain the interpretation process is, and it reveals that the “evidence” Freud offered for his view is not persuasive in the way science requires.

Modern scholars have therefore turned to a different hypothesis about dream content, one that does not view dreams as having a specific function of their own. Instead, dreams may be just a by-product of other brain activities. Specifically, the activation-synthesishypothesis begins with the fact that during REM sleep, the pons (a structure in the brainstem) produces bursts of neural activity that in turn activate areas in the lateral genicu-late nucleus—an important processing center for visual information. This activity then 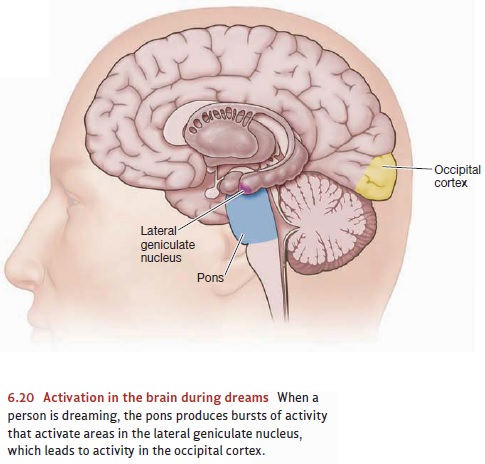 leads to activity in the occipital cortex—the brain area that carries out most of the analy-sis of visual input. Researchers refer to this neural activity as PGO waves because it involves the pons, the geniculate, and the occipital areas (Figure 6.20). These waves are the “activation” part of activation synthesis and give us an immediate explanation for why dreams are filled with vivid visual images—the result of neural activity in brain areas ordinarily involved in processing visual information.

But why do certain images come to mind? The key here is that these brain areas have been primed by other neural activity, activity caused by the person’s recent experiences as well as shaped by their recurrent thoughts. It is therefore the combination of PGO activity and this priming that brings certain images—either from the previous day or reflecting broader themes—into awareness. There is, however, no orderly narrative linking the images that come to mind; instead, the sequence is essentially random. Still, the brain does what it can to assemble these images into a coherent plot—this is the “synthesis” part of the activation-synthesis hypothesis. Some of this assembly takes place during the dream itself, but some probably occurs once the person is awake and trying to recall the dream.

Let’s be clear, though, that the set of ideas activated in the sleeper’s brain is likely to be something of a hodgepodge, since the sequence of these ideas is not constrained by perceptual input or a cohesive set of goals. As a result, the effort toward coherence will often be only partially successful, and this is why dreams are often unrealistic: The shaky plot line is the best the brain can do in weaving together the odd assembly of images that bubble into awareness during REM sleep.

Other aspects of brain activity also play a role in shaping dream content. Several studies have monitored the pattern of blood flow through people’s brains while they were dreaming. The data show high levels of activity in the limbic system, a set of structures in the brain—including the amygdala—associated with perceiving and regulating emotion; this result obviously fits with the emotional character of many dreams (Schwartz & Maquet, 2002). The data also show considerable neural activity in the motor cortex—as if the neurons were trying to initiate movements, although other mechanisms (in the brain stem) intercept the signals from the motor cortex and ensure the movements never occur. (This is why, as we mentioned earlier, the body is impressively immobile during REM sleep.)

Brain scans also show diminished activity during sleep in some brain areas. These include the prefrontal cortex, a brain region often associated with planning and intelligent analysis. This finding may give us a further clue about why dreams often have peculiar content: When we’re in the dream state, the parts of the brain needed to assemble the story elements into an intelligible narrative aren’t fully engaged.