Introspections are an enormously valuable source of evidence and are used in formal investigations as well as in a range of day-to-day settings.

Introspections are an enormously valuable source of evidence and are used in formal investigations as well as in a range of day-to-day settings. But there are many things that we can’t learn by asking people to introspect. In some cases, this is because introspectors may choose not to reveal what they’re really thinking. Suppose a friend asks you, “Does this dress make me look fat?” or “Did you like the pie I baked for 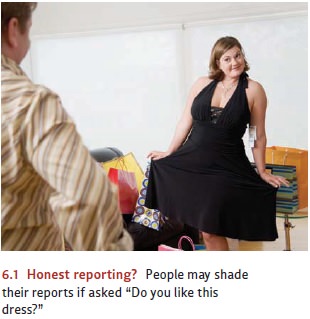 you?” If you put a higher value on diplomacy than on honesty, your answers will be no and yes—even if that’s not what you think (Figure 6.1). In other cases, you may want to be honest in reporting your thoughts and experiences but you simply don’t have the vocabulary. For example, imagine you’re trying to convey in words exactly what your mother looks like. You’re likely to fail in this task because most of us lack the descriptors we might need to capture the exact curve of our mother’s chin or the precise shape of her eyes. Likewise, imagine that you’ve met some poor soul who has never eaten chocolate and you’re trying to tell her what chocolate tastes like. You might mention that it’s sweet, although usually with bitter overtones; you might mention other foods that taste similar to chocolate. Despite these efforts, though, you might end up saying, “If you want to know what chocolate tastes like, you’ll just have to try it for yourself.”

In many other settings, people do seem able to find words that can convey their thoughts; but there’s still a problem here, one that philosophers sometimes convey by means of the inverted spectrum: Imagine that some people are born with a strange mutation that makes their color vision the inverse of yours. When they look at a ripe tomato, they see a color that—if you experienced it—you’d call “violet” (Figure 6.2). Their experience when they look at a banana is the same as the experience that you’d have when looking at a pair of blue jeans. When they look at a clear sky (one that you would consider to be blue), they see a color that—if you experienced it—you would count as yellow. 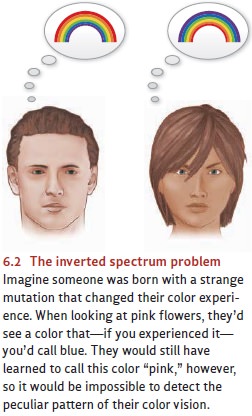 How could we tell whether someone has an inverted spectrum? We could—at least in principle—examine the photopigments in the person’s eyes and the neural response in his visual cortex. Perhaps those tests would tell us that biologically, his visual system responds to various wavelengths the same way everyone else’s does. But does that mean his subjective experience is the same as ours? To answer this question, we’d need to know exactly how biological responses translate into subjective experiences—but we don’t. Therefore, we can’t rely on someone’s biology to tell us if they have an “inverted spectrum” or not.

We also can’t rely on someone’s behavior to tell us whether he suffers from this odd visual problem. After all, from a young age, he’d have learned to call tomatoes red and bananas yellow—just like we do. He would agree that orange and yellow seem similar to each other (although his inner experience would be what we call blue and purple). He would agree that certain colors seem to be the opposites of each other—red and green, for example (although his inner experience would be what we call violet and green). No matter what test we construct, his responses to color and descriptions of color will match ours.

The inverted-spectrum problem is of course a contrived and peculiar case, but similar problems arise in many other settings. For example, if you say that mosquito bites hurt, and I say they itch, is this because we have different experiences in response to these bites or because we mean different things by the word itch? There’s no way to know. Likewise, if you claim that your headaches are excruciating and I don’t describe mine that way, does this mean your headaches are worse than mine? Or, perhaps, do you mean something different by the word excruciating? Again, there’s no way to know.

To put these points more broadly, the problem here is that conscious experiences are ineffable—an old-fashioned term meaning “utterly indescribable.” The problem existsnot because people are shy or somehow oblivious to their own conscious states. Instead, conscious states are ineffable because there’s often no way to ensure that your words, in describing your conscious experience, mean the same thing as anyone else’s words. Do you mean the same thing by “blue” as they do? How about “itchy” or “excruciating”? With no way to answer these questions, we have to accept that the words themselves will forever be inadequate as a way of describing consciousness—a profound limitation on what we can hope to learn from anyone’s self-report.