Consciousness: The Need For Sleep

Why does sleep have such a complex architecture, with different stages and different types of activity?

THE NEED FOR SLEEP

Why does sleep have such a complex architecture, with different stages and different types of activity? What functions do these individual stages serve? Surprisingly, the answers are still unknown.

It is clear that sleep does have some function: If people are deprived of sleep, their alertness decreases, they complain of feeling poorly, their mood suffers, and they do less well on mental and physical tasks (Figure 6.14). They express a desire to get to bed as soon as they can; and when they do get to bed, they rapidly fall asleep (e.g., Dinges, Rogers, & Baynard, 2005).

What’s more, people do not just need sleep; they need adequate amounts of both slow-wave and REM sleep. If, for example, people are selectively awakened throughout the night during stages 3 and 4, they spend more time the next night in these sleep stages (Bonnet, 2005; Webb, 1972). Likewise, if they’re awakened during REM periods throughout the night, they’ll try to make up the lost REM sleep on subsequent nights and spend more and more of the night in REM sleep as the number of days of REM deprivation increases. This pattern of REM rebound is also visible in people who have recently stopped taking medications that selectively suppress REM sleep—medications that include some commonly prescribed sleeping pills. When people stop taking these pills, they may sleep less overall (because they’re no longer being tugged toward sleep by the pills); but when they do sleep, they’re likely to spend an increased number of minutes in REM.

Studies also suggest that sleep deprivation—or even just REM sleep deprivation— leads to a compromised immune system, leaving the organism susceptible to bacterial invasion and therefore more vulnerable to a range of illnesses (Everson & Toth, 2000). Indeed, just several nights of partial sleep deprivation can decrease the body’s immune response by half (Spiegel, Sheridan, & Van Cauter, 2002). Sleeplessness also creates other health risks; for example, it’s strongly associated with automobile and workplace accidents (e.g., Walsh, Dement, & Dinges, 2005). Fortunately, though, sleeplessness is easily treated—by letting the person get back to bed! Indeed, even when a person has trouble falling or staying asleep, the problem is easily treatable. Many cases of insomnia respond readily to simple sleep regimens: making the bedroom quiet and dark; keeping bedtimes and waking times constant; refraining from stimulants like caffeine and nicotine after the evening meal; using the bed only for sleep, and getting out of bed if sleep does not come within 15–20 minutes.

How much sleep do we need? The answer varies from person to person, and it cer-tainly varies with age (Figure 6.15; Iglowstein, Jenni, Molinari, & Largo, 2003; Roffwarg, Muzio, & Dement, 1966). Infants take brief naps throughout the day; they average about 16 hours of sleep each day and spend half of that time in REM sleep. As children age, they need appreciably less sleep and spend less time in REM periods and more time in slow-wave sleep, which is apparently important for growth and develop-ment. Adolescents average 8 hours per night, 2 of which are REM sleep. Senior citizens average 6 hours per night, of which only 1 hour is spent in REM. Some sleep researchers, however, believe that 6 hours is not enough; they suggest that this amount of sleep—in seniors or anyone—represents undiagnosed yet treatable insomnia (Dement & Vaughan, 1999). 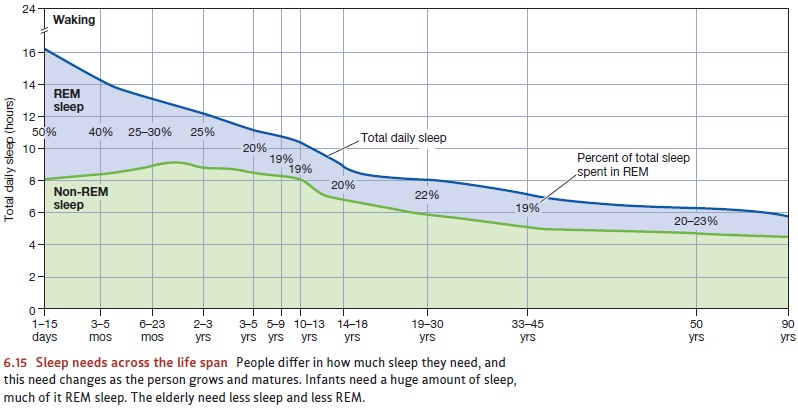 Let’s emphasize, though, that these numbers are just averages; some people sleep more and a few sleep much less. People’s sleep patterns also differ in another way, because people vary markedly in the timing of their peak alertness during the day. Some people truly seem to be “morning people”; others are “night people” (Duffy, Rimmer, & Czeisler, 2001; May & Hasher, 1998). The so-called early birds differ from the night crew in several ways. The two groups are—as common sense suggests—distinct in when, during each day, they’re most alert and when they’re most careful in their judg-ment and reasoning (Bodenhausen, 1990). The groups also differ in how their body temperature, blood pressure, and digestive rhythm fluctuate across a 24-hour period.

Why do people differ in these ways? Part of the reason is biological; this is evident in the fact that the various changes associated with puberty seem to produce a shift in daily rhythms. This is why adolescents usually develop a preference for later bedtimes and later rising times—a preference that lasts into early adulthood (Carskadon, Acebo, & Jenni, 2004; also C. Schmidt, Collette, Leclercq, Sterpenich, Vandewalle et al., 2009). Environmental factors also play a role; these factors include the number of hours of daylight a person is exposed to as well as cultural factors such as the prescribed timing of various meals.