Everyone has experienced the altered consciousness associated with sleep. A different form of altered consciousness is less common, but still deeply interesting. This is the altered state that a person reaches when hypnotized. Many myths are associated with hypnosis—including what it is and what it can accomplish. At its essence, though, hypnosis is a highly relaxed state in which the participant is extremely suggestible, andthe result is that he’s likely to feel that his actions and thoughts are happening to him rather than being produced by him voluntarily. But what’s the exact nature of this state?

WHAT CAN HYPNOSIS ACHIEVE ?

When German physician Franz Mesmer (1734–1815; Figure 6.21A) first demonstrated his early version of hypnotism, his technique relied on magnets and tanks of water. Mesmer moved around his hypnotic subjects while making complex gestures and passing his 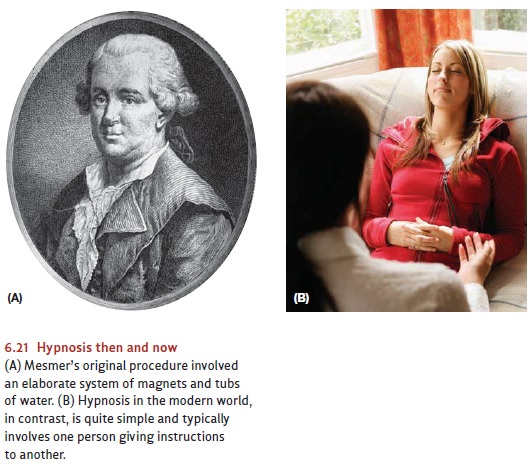 hands over their bodies. Most of these details, however, were just theatrics; modern hyp-nosis procedures are more straightforward (Figure 6.21B). The person being hypnotized sits quietly and focuses on some target—a particular sound, or a particular object that is in view. The hypnotist speaks to the person quietly and monotonously, encouraging her to relax. The hypnotist also offers various suggestions about what will happen—including many things that are just inevitable as the person relaxes: “Your eyelids are drooping downward,” or “Your limbs are getting heavy.” Gradually, the hypnotist leads the person into a state of deep relaxation and extreme suggestibility.

Extraordinary claims are sometimes made about what people can do while in a hypnotized state, but we need to examine these claims with care. It’s true, for example, that people can be led to perform unusual and even bizarre actions; but in many cases, these actions are not the result of the hypnotic state at all. For example, people under hypnosis can be shown fluid and told that it’s a powerful acid; they’ll then comply with the cruel instruction to fling the “acid” into another person’s face. Often, this demonstration is accompanied by the statement that no sane person would perform this act without hypnosis; so, apparently, we’re to believe hypnosis can overcome someone’s inhibitions and lead them into otherwise unspeakable behavior. It turns out, though, that this argument is mistaken: Exactly the same behavior can be produced by simply asking people to pretend to be hypnotized and to act the way they think a hypnotized person would (Orne & Evans, 1965). Clearly, therefore, the hypnosis itself is playing little direct role in producing this behavior.

We’ll also discuss some of hypnosis’s alleged effects on memory. For example, in a procedure called hypnotic age regression, the hypnotized person is instructed that he has returned to an earlier age—and so is now three years old, for example, or even younger. The hypnotized person will behave appropriately, talking in a child’s voice and doing childish things. Even so, the person has not in any real sense “returned” to an earlier age. Instead, he’s simply acting like an adult believes a child should. We can obtain similar performances simply by asking people who aren’t hypnotized to simulate a child’s behavior. In addition, it turns out that adults have a number of mistaken beliefs about how children behave; under hypnosis, the age-regressed person acts in a fashion consistent with the (incorrect) adult notions and thus not like a real child (Silverman & Retzlaff, 1986).

Likewise, many people believe that hypnosis is a powerful way to retrieve lost memories— for example, they think that under hypnosis, a witness to an auto collision can recall precise details of where people were standing at the accident scene, what the cars’ license plate num-bers were, and more—almost as though hypnosis provided a “rewind” button that allows the person to relive the event and note the details they had neglected in the original episode. None of this is real, however. There’s no reason to believe that hypnosis improves memory. Instead, hypnosis may actually undermine memory—making the person more confident in their recollection, whether the recollection is correct or not; and making them markedly more susceptible to leading questions or suggestions that the hypnotist might offer (e.g., Sheehan, Green, & Truesdale, 1992). This is why most American, Canadian, and British jurisdictions forbid courtroom testimony that has been “enhanced” through hypnosis.

One of the more dramatic effects of hypnosis, and a powerful indication that hypno-sis can create a special state of mind, is the phenomenon of hypnotic analgesia—pain reduction produced through hypnotic suggestion (Hilgard & Hilgard, 1975; Patterson

Jensen, 2003; Patterson, 2004). Using this technique, people have undergone various dental procedures and some forms of surgery without any anesthetic, and they report little suffering. In some studies, hypnotized people seem to suffer less than people given various other pain treatments, including acupuncture, aspirin, or even morphine (Stern, Brown, Ulett, & Sletten, 1977).

It’s important to mention, though, that not every individual shows the hypnotic analgesia effect, because some people can’t be hypnotized. In fact, susceptibility to hypnosis varies broadly. Some people are largely unmoved by a hypnotist’s suggestions, and other people—“hypnotic virtuosi”—are powerfully influenced. The degree of susceptibility seems to be linked to how easily the individual can become absorbed in certain activities, such as watching a movie or playing a video game—and the people who are more readily “absorbed” are likely to be more hypnotizable (Barnier & McConkey, 2004; Kirsch & Braffman, 2001; Tellegen & Atkinson, 1974).

Does hypnosis truly produce an altered state of consciousness, so that a hypnotized person is in a qualitatively different state of mind than someone who’s not hypnotized? More broadly, what exactly does hypnosis achieve? Some people argue that hypnosis needs to be understood in relatively mundane social terms—one person (the hypnotist) simply has an enormous influence on another (the person hypnotized). Social influences can be incredibly powerful, leading us to perform a range of actions that we think we would never do. Perhaps hypnosis can be understood in similar terms—and, if so, then it’s more like our ordinary mode of consciousness than one might suppose (e.g., Spanos, 1986; Spanos & Coe, 1992).

We’ve already seen some of the data consistent with this view. For example, hypnotic age regression isn’t a low-tech time machine; instead, the “regressed” individual is sim-ply playing a role as well as she can. Likewise, memories called forth under hypnosis are likely to be constructions—not the result of some highly effective and specialized

process. Similarly, at least some of the remarkable feats associated with hypnosis can also be performed without hypnosis (Figure 6.22), further undermining claims about the special status of the hypnotic state.

A very different proposal, however, is that hypnosis involves a special state of dissociation (Hilgard, 1986, 1992), a mental state in which we shift out of our normal “first-person” per-spective. We might feel like we’re “outside of ourselves,” watching ourselves from a detached position. We might also feel like our experiences are happening to someone else and that our actions are controlled by someone else. Some clinical psychologists suggest that disso-ciation is a powerful means through which each of us can shield ourselves from emotion-ally painful experiences. The proposal here, though, is that similar mechanisms are involved in hypnosis, so that our conscious control of our thoughts, and our sense of immediate experience, are somehow set aside for as long as the hypnosis lasts.

As one specific version of this hypothesis, consciousness researcher Ernest Hilgard has suggested that hypnosis causes, in effect, a splitting of a person’s awareness into two separate streams. One stream is responsive to the hypnotist’s instructions, essentially surrendering control to the hypnotist. The second stream of awareness remains in the background as a “hidden observer”—so that the person is alert to the sequence of events—but still leaves the hypnotist in control of what the person does or, to some extent, feels.

Each of these proposals, one emphasizing social influences and one emphasizing dissociation, may capture important truths. And each proposal may explain different aspects of hypnosis. Indeed, some researchers have proposed this sort of hybrid conception of hypnosis by explaining some aspects of the hypnotic state in terms of social factors and other aspects in terms of dissociation (Kihlstrom & McConkey, 1990; Killeen & Nash, 2003). Perhaps, therefore, we can understand some of hypnosis’s effects as not involving changes in consciousness; but at least some of the effects (e.g., the analgesia) do seem to involve an altered state, so the implication is that hypnosis can actually change someone’s conscious status.