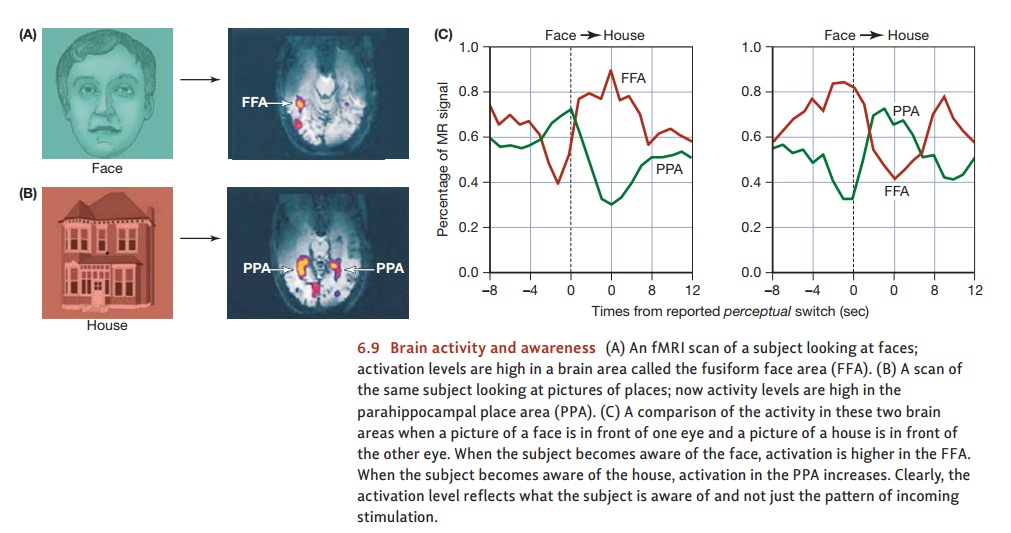 Further insights into the biological basis for consciousness come from studies of the so- called neural correlates of consciousness—specific states of the brain that correspond to the exact content of someone’s conscious experience.

Further insights into the biological basis for consciousness come from studies of the so- called neural correlates of consciousness—specific states of the brain that correspond to the exact content of someone’s conscious experience. In one study, for example, the researchers  exploited  a  phenomenon  known  as  binocular  rivalry  (Tong,  Nakayama, Vaughan, and Kanwisher, 1998). In the study, one picture is placed in front of one of aperson’s eyes and another, entirely different picture is placed in front of her other eye. Inthis setup, the visual system is unable to handle both stimuli at once,or to fuse the stimuli into a single complex perception. Instead, thevisual  system  seems  to  flip-flop  between  the  stimuli  so  that, for  awhile, the person is aware of only one picture, then for a while awareof only the other, and so on. Notice therefore that this is a setting in which  the  physical  situation  doesn’t  change—the  two  pictures  arealways   present.  What   is   changing   is   the   person’s   consciousexperience—that is, which picture she’s aware of. This allows us to askwhat changes take place in the brain when the experience changes.

In this study, the researchers placed a picture of a face in front oneof the participant’s eyes and a picture of a house in front of the other eye. We know from many other studies that when people are looking at faces, neuroimaging reveals high levels of activity in a brain region called the fusiform face area (FFA). We also know that when people are looking at houses, there’s a lot of activity in a brain region known as the parahippocampal place area (PPA).

But what exactly does this brain activity—in the FFA or PPA—indicate? If these brain areas respond simply to the available stimuli, then the pattern of activity should be constant in the Tong et al. procedure. The stimuli, after all, were present all the time. But if these brain areas reflect the participants’ conscious perception, then activity should fluctuate—with a change in brain activity each time the binocular rivalry produces a new perception.

In the Tong et al. study, participants pressed buttons to indicate at each moment which picture they were aware of seeing—the house or the face. At the same time, the researchers used fMRI to keep track of the activity levels in the FFA (again, normally responsive to faces) and the PPA (normally responsive to places).

The results are summarized in Figure 6.9. Immediately before the moments in which the participant reported a conscious switch from seeing the face to seeing the house, activity in the FFA went down and activity in the PPA went up. At moments in which the participant reported the reverse switch, the activity levels in these two brain areas showed the opposite pattern. 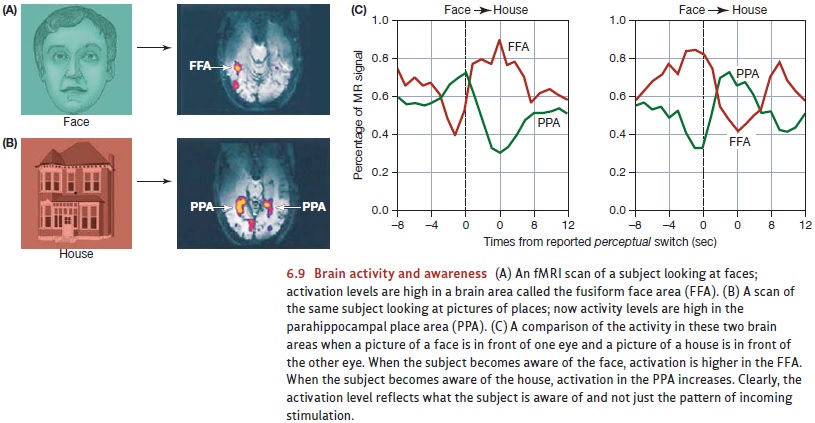 A different example concerns—remarkably—the conscious sensation of “free will.” In a classic study, participants watched a dot moving in a circular pattern on a computer screen, and they were asked to move their hands occasionally (Libet, 1983; also see Haggard & Eimer, 1999; Wegner, 2002). It was up to the participants to decide when they would move their hands; but they were asked to note the dot’s position at the exact moment when they 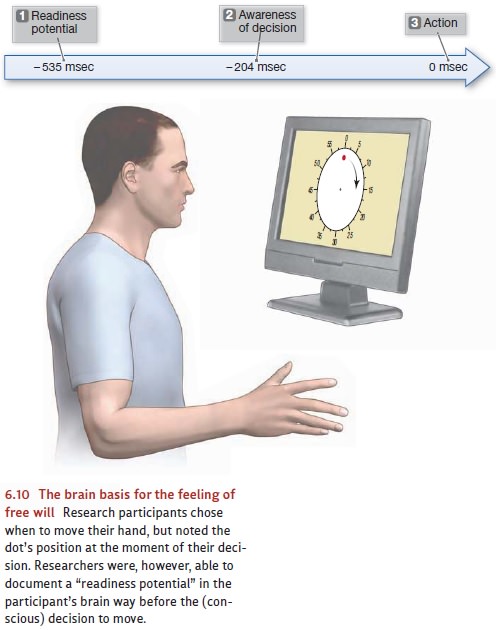 chose  to  make  this  movement, and  later  they  were asked to report this position. This response tells us in essence when the conscious decision to move actu-ally took place, and we can compare that moment to when the movement itself occurred.

Not  surprisingly, there  was  a  brief  gap—about  200  millisec-onds—between  the  moment  of  decision  and  the  actual  move- ment.  It  took  a  fraction  of  a  second,  it  seems,  to  translate  the decision into an action (Figure 6.10). The real surprise was that recordings of brain activity showed a marked change—a so-called readiness potential—almost a half-second before participantsreported any awareness of a decision to move. In other words, the participants’ brains had launched the action well before

the participants themselves felt they had initiated the action. This result seems to imply that the feeling of “I will move my hand now” is not the cause of brain activity, as common sense might suggest. Instead, it’s the result of brain activity— in particular, brain activity in the pre-motor and anterior cin-gulate cortices (Lau et al., 2004). In other words, the “decision to move” and the initiation of action happen out-side of awareness, and the person (consciously) learns only a moment later what they’ve just decided. (For some complica-tions and possible challenges to this result, see Banks & Isham, 2009; Desmurget et al., 2009; Haggard, 2009; Obhi, Planetta, & Scantlebury, 2009.)