Consciousness: The Function of Sleep

Sleep-deprivation studies tell us that sleep is necessary, but they don’t tell us why.

THE FUNCTION OF SLEEP

Sleep-deprivation studies tell us that sleep is necessary, but they don’t tell us why. Common sense suggests one hypothesis—the idea that sleep is restorative, allowing us to replace or replenish some substance that’s used up when we’re awake. This idea is supported by evidence that people do show longer periods of slow-wave sleep under conditions of physical fatigue, when they have a greater need for bodily recuperation (e.g., Youngstedt, O’Connor, & Dishman, 1997). Likewise, marathon runners sleep longer during the nights just after a race, and they spend most of that time in slow-wave sleep (Shapiro, Bortz, Mitchell, Bartell & Jooste, 1981).

Despite these observations, however, it has been difficult to pinpoint exactly what sleep restores. One possibility is that during sleep, our bodies can clear out some of the cellular waste products that are the result of routine metabolic activity (Alanko et al., 2004). A different proposal involves certain growth hormones that our body produces at higher rates when we’re asleep. These hormones promote body repair, consistent with the broad idea that sleep is a time of repairing our tissues—whether in response to some injury or just dealing with the ordinary wear and tear in the body caused by daily life (Siegel, 2003).

Other hypotheses about sleep’s function are also plausible. One suggestion is that brain activity during REM sustains important brain circuits, based on the notion that synapses need activity to maintain their strength. A different proposal is that sleeping may in effect “reset” overstimulated neurons—perhaps to save energy and perhaps to make sure the neurons aren’t firing at their maximum—so they’ll be ready to fire in the next day if needed (Figure 6.16; Donlea, Ramanan, & Shaw, 2009; Gilestro, Tunoni, & Cirelli, 2009). 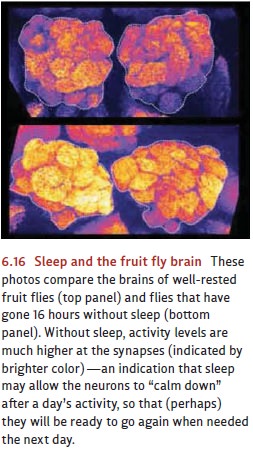 Yet another proposal also focuses on neural activity—but with a different emphasis. This hypothesis suggests that neural activity during both REM and slow-wave sleep helps to consolidate memories gained during the previous day (Dumay & Gaskell, 2007; Hobson, 2002; Rasch & Born, 2008; Stickgold, 2005). Consistent with this proposal, several studies have shown that performance on certain motor tasks (such as rapid tap-ping in a particular sequence) improves markedly after a period of REM sleep (Mednick, Nakayama, & Stickgold, 2003; Walker, Brakefield, Hobson, & Stickgold, 2003). Likewise, one recent study indicates a linkage between infants’ naps and their learning—for exam-ple, learning about the patterns of language that they hear (Gómez, Bootzin, & Nadel, 2006; for some challenges to the idea that sleep contributes to memory consolidation, see Miller, 2007; Rickard, Cai, Rieth, Jones, & Ard, 2008).

Obviously, then, researchers still disagree about why we sleep; and many propos-als are being discussed. One last proposal offers a very different perspective: Organisms need time each day to digest their food, and this demands that they spend some hours in an inactive state, preferably in a spot sheltered from the weather and away from potential predators. Likewise, animals that locate their food (or mates) by means of vision are limited in what they can do in the dark, and this too demands a period of inactivity, away from danger. It is possible, therefore, that sleep has no function on its own but is simply the way animals spend this inactive time (Figure 6.17)—a period of inactivity imposed by other considerations and 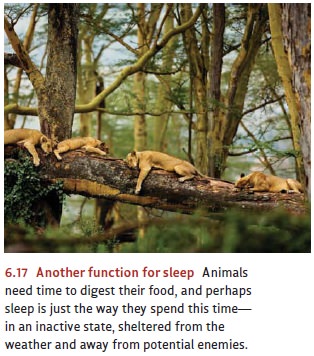 enforced by the circadian rhythm created within the nervous system (e.g., Webb, 1974, 1994). Based on this view, the effects of sleep deprivation may not be the result of missing out on the benefits of sleep. Instead, sleep deprivation may just be the result of an organism fighting against its own natural rhythms—an internal conflict that can by itself be unsettling.

We therefore have many proposals for why we sleep; and so far we have no evidence clearly favoring one proposal over the others. But maybe all of these hypotheses are correct. Maybe, in the end, sleep has all of these functions—thus underscoring the importance of sleep for all animal species.