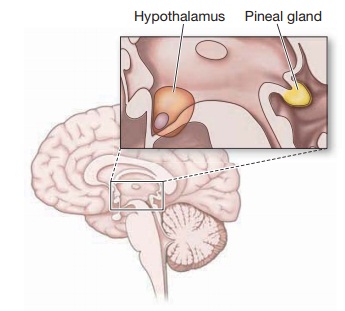 As we noted, the brain is a physical object: It has a certain mass (about three pounds), a certain temperature (a degree or two warmer than the rest of the body), and a certain volume (a bit less than a half gallon).

As we noted, the brain is a physical object: It has a certain mass (about three pounds), a certain temperature (a degree or two warmer than the rest of the body), and a certain volume (a bit less than a half gallon). It occupies a specific position in space. Our conscious thoughts and experiences, on the other hand, are not physical objects and have none of these properties. An idea, for example, does not have mass or a specific tem-perature. A feeling of sadness, joy, or fear has neither volume nor a location in space.

How, therefore, is it possible for the brain to give rise to our thoughts? How can a physical entity give rise to nonphysical thoughts and feelings? Conversely, how can our thoughts and feelings influence the brain or the body? Imagine that you want to wave to a friend, and so you do. Your arm, of course, is a physical object with an iden-tifiable mass. To move your arm, therefore, you need some physical force. But your ini-tial idea (“I want to wave to Jacob”) is not a physical thing with a mass or a position in space. How, therefore, could your (nonphysical) idea produce a (physical) force to move your arm?

The puzzles in play here all stem from a quandary that philosophers refer to as the mind-body problem. This term refers to the fact that the mind (and the ideas,thoughts, and feelings it contains) is an entirely different sort of entity from the physical body—and yet the two, somehow, seem to influence each other. How can this be? Roughly 400 years ago, the philosopher René Descartes (1596–1650) confronted these issues and concluded that the mind and the body had to be understood as entirely different species of things, separate from each other. The mind, in his view, was defined by the capacity for thought (Descartes’ term was res cogitans—“thing that thinks”); the body, on the other hand, was defined by the fact that it had certain dimensions in physical space (res extensa—“extended thing”). 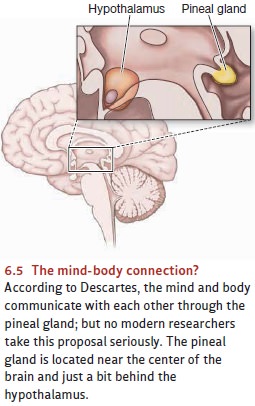 Descartes knew, however, that mind and body interact: Physical inputs (affecting the body) can cause experiences (in the mind), and, conversely, thoughts (in the mind) can lead to action (by the body). To explain these points, Descartes proposed that mind and body influence each other through the pineal gland, a small structure more or less at the center of the brain (Figure 6.5). This is the portal, he argued, through which the physical world communicates sensations to the mind, and the mind communicates action commands to the body.

Modern scholars uniformly reject Descartes’ proposed role for the pineal gland, but the mystery that Descartes laid out remains. Scientists take it for granted that there’s a close linkage between mind and brain; one often-quoted remark simply asserts that “the mind is what the brain does”. But, despite this bold assertion, we truly do not know how the physical events of sensation give rise to conscious experiences or how conscious decisions give rise to physical move-ments. We can surely talk about the correspondence between the physical and mental worlds—what physical events are going on when you experience “red” or “sad” or “anxious”—but we do not yet have a cause-and-effect explanation for how these two worlds are linked.